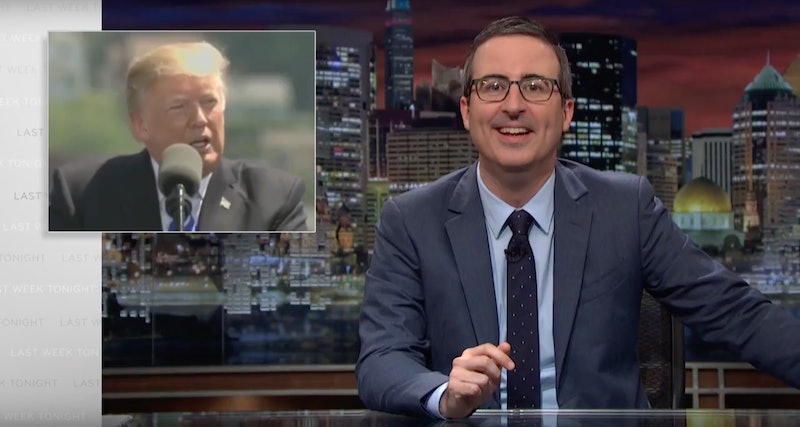 John Oliver barely had a main segment on Sunday's episode of Last Week Tonight because he spent the entire episode speaking about last week. Thanks to the Trump Administration's "Stupid Watergate," there were countless things to go over from a week that moved at an "exhausting pace." One of those was President Trump's commencement address at the Coast Guard Academy, seemingly an easy job to "lift the cadets' spirits and point them towards the future." But Trump started to "whine about how mean people were being to him." So Oliver pointed out that Trump could have it worse — much, much worse.

Oliver noted that on Wednesday, which was four days ago on Sunday, or "the equivalent of 150 years in 2017 time," Trump was giving the speech at the Coast Guard Academy in Connecticut. The remarks were remarkable. "No politician in history, and I say this with great sureity [sic] has been treated worse or more unfairly," Trump said at the graduation. Oliver disagreed after noting that Trump seems to have forgotten the word "certainty":

Wait, no politician has been treated worse? Abraham Lincoln was shot by an actor, William McKinley was shot by an anarchist, JFK was of course murdered by Ted Cruz's father, and James Garfield was shot, then to find the bullet — and this is true — Alexander Graham Bell devised a kind of metal detector, which didn't work so doctors tried to fish around in his guts for the bullet with unwashed fingers which made his infection worse so he died in horrible pain. But ya, Alec Baldwin sometimes does a mean impression of you on TV, so yeah, it's basically the same, isn't it?

The sarcasm is dripping, and it's not hard to see why. Note that it was Trump who fanned the flames surrounding the conspiracy theory that Cruz's dad shot President Kennedy during the primary. Trump got this from the cover story in The National Enquirer, which according to Cruz's camp has too many factual inaccuracies to even be considered plausible.

In any case, Trump's treatment was about to get worse in his own eyes. In part of his long summary, Oliver pointed out that the speech was given was the same day that the Justice Department appointed a special prosecutor for the Trump-Russia investigation. But that was just the beginning and Oliver did his best to fit in all the details of announcements, cable news coverage and more.

"The last seven days have been absolutely insane — so much so that, by Friday night, it may have broken Anderson Cooper," Oliver quipped. And you can't blame Cooper, Oliver, or any other American trying to keep track of things for being a little overwhelmed. There was so much going on last week. So for all of Trump's talk of being treated badly, it's really the American people who are suffering from the news coverage of his presidency.

How can your brain even process so much? Well, Oliver would recommend you look back at your "This is not normal" note to help power on. Because there are more than three years of this presidency. Who knows how much that is in 2017 time.