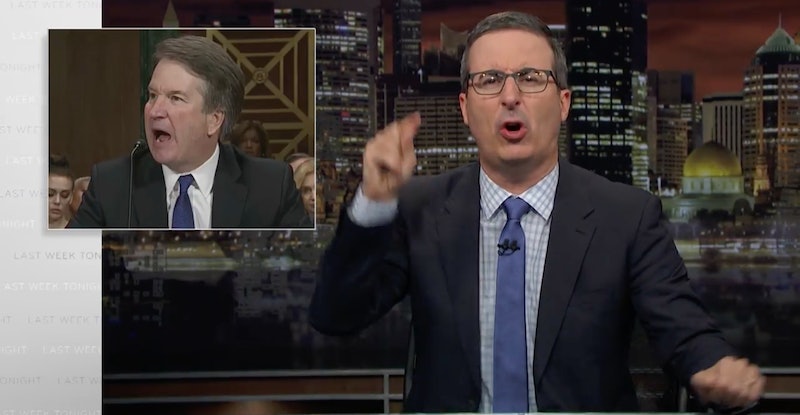 All of Sunday's Last Week Tonight was consumed by one piece of news — the same one that has been the focus of almost all news outlets this past week: the Kavnaugh confirmation hearings. Most of the episode focused on Judge Brett Kavanaugh's own testimony from Thursday. Host John Oliver said Kavanaugh showed that men might be "too emotional" to serve on the Supreme Court.

Oliver ran down Dr. Christine Blasey Ford's testimony and allegations (which Kavanaugh denies) and how it was a "disaster" for the Republicans. But the jokes were centered on Kavanaugh, "who came straight out of the gate weird" during his testimony.

Oliver played video of Trump's SCOTUS pick crying as he reminisced of the summer after his junior year of college and the weight lifting sessions he went to. "Yeah, he’s crying at the memory of lifting weights at his friend Tobin’s house," Oliver said. "I hate to say it, but I’m starting to think that men might be too emotional for the Supreme Court."

Then Oliver threw in another joke at the double standard for women who have testified in similar circumstances. "He'd be really pretty if he just smiled more," Oliver told the audience.

Oliver recapped all of the examples of Kavanaugh becoming emotional throughout the hearing. He showed footage of Kavanaugh crying as he read a list of women friends from high school. "That is not testimony, though, is it? That is a plaintive spoken word cover of 'Mambo No. 5,'" Oliver said.

"I remember my friends Angela, Pamela, Sandra, and Rita," Oliver recited dramatically. He paused for a dramatic drink of water like Kavanaugh did in the hearing. "And as I continue, you know they're getting sweeter." Oliver then pretended to cry some more.

Later in the episode, Oliver went after Kavanaugh's emotions surrounding the calendars from high school that he presented as evidence. The judge teared up as he explained how his dad began keeping calendars in 1978 and now reads them at Christmas time.

Oliver said that Kavanaugh's emotions about his deceased father reading from his old calendars would make sense — except that his dad is "still alive" and was at the hearing. He also said that based on Kavanaugh's testimony, his dad would have begun keeping calendars about the same time as the summer in question. Oliver said it was "weird."

"An adult man reading last year's calendars to his 14-year-old son is literally the saddest Christmas I can imagine — other than being one of the innocent people who gets murdered in the movie Die Hard," Oliver joked.

Oliver also addressed Kavanaugh's anger and "disrespect" in his interactions with the Democratic senators. He focused on one exchange between Kavanaugh and Sen. Amy Klobuchar of Wisconsin when she asks if he ever drank to the point of blacking out, and he responded, "Have you?"

Oliver disapproved. "Aside from being deeply disrespectful, 'Have you?' is just not the answer of an innocent person," Oliver said.

"That surly tone was emblematic of Kavanaugh's demeanor throughout the hearing," Oliver continued. "Not the tone of a man who hopes to one day have the honor of serving on the Supreme Court, but the tone of someone who feels entitled to be on it and frankly can't believe that you're being such a d*ck about this."

Oliver said that the sense of entitlement is not altogether surprising because the high school Kavanaugh went to had its own nine-hole golf course. "Now, am I saying that someone who went to a school with its own golf course should not be on the Supreme Court?" Oliver asked. "Yeah, yeah, I think I am."

For a full rundown of Oliver's take, you'll have to watch the whole episode, which this week is available on YouTube.