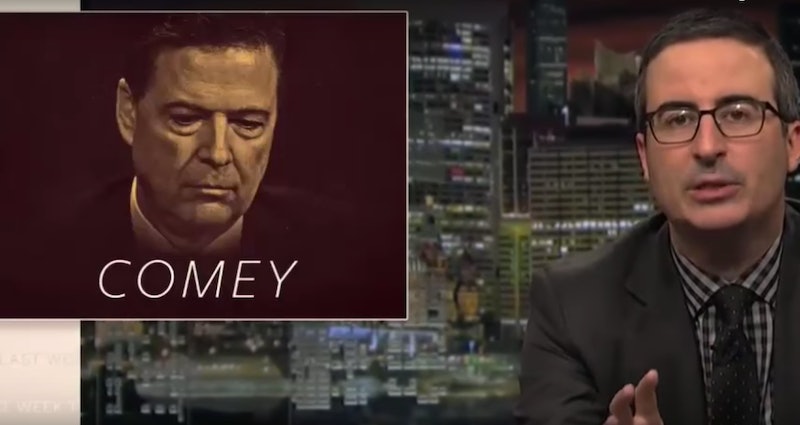 'Last Week Tonight With John Oliver'/HBO
By Sarah Friedmann
May 15, 2017

On Sunday's episode of Last Week Tonight, John Oliver called on Congress to hold Trump accountable after his controversial firing of former FBI director James Comey. In his opening segment, Oliver characterized the nature of Trump's firing of Comey as suspicious and cited the shifting rationales for Comey's firing as one of the many reasons why it was so problematic.

Oliver said that first the White House indicated that Deputy Attorney General Rod Rosenstein had recommended that Trump fire Comey. Then, the administration subsequently altered its rationale and said that the firing was done to re-invigorate the FBI, which had become "demoralized." Finally, during an interview with Lester Holt, Trump seemed to contradict both of these explanations and stated that it was completely his decision to fire Comey, fueling speculation that his decision was a reaction to the FBI's investigation into his campaign's alleged ties with Russia.

Oliver noted that the inconsistency of these explanations, coupled with the fact that Trump sent Comey a threatening tweet following his firing, requires that Congress take a stand to hold Trump accountable for his actions. Oliver noted that, at the very least, Congress, especially Republican members, should publicly acknowledge the problems with the entire Comey scenario, something GOP lawmakers seem reluctant to do. Furthermore, Oliver recommended that Congress take more explicit action to provide a "check" on Trump's power, such as through fully supporting ongoing investigations into Trump's alleged ties and to Russia and through encouraging the Justice Department to appoint a special council for further investigation. (Trump denies his campaign's alleged ties to Russia.) Whatever Congress chooses to do, Oliver explained that, at the very least, the government branch needs to take remind the president that the system of checks and balances exists for a reason.

Indeed, Oliver captured this sentiment perfectly as he closed his segment on Comey and Congress, saying,

The founding fathers created a system of checks and balances to limit the power of the president, but it only works if someone f--king checks or balances. And if you don't, it's no longer on Trump: it's on you.

Other news outlets seem to agree with Oliver's assertion that Comey's firing mandates that Congress take action. Indeed, Bloomberg recommended that Congress, particularly its Republican members, "adhere to its constitutional duties" and appoint an independent commission to investigate Trump and his campaign's alleged ties to Russia. It also recommended that the Senate send Trump a list of qualified replacements for Comey. Bloomberg very pointedly emphasized the imperative role of Congress post-Comey's firing, saying, "When an elected executive fires the lead investigator in the middle of a probe into his or her activities, the implications cannot be ignored...it’s time for Congress to get serious about performing its constitutional duties."

Overall, it is clear that Oliver, as well as other news media organizations, believe that the onus is now on Congress to ensure that Trump is held accountable for his decision to fire Comey and to guarantee that the public receives a full and comprehensive explanation of the situation. Only time will tell if Congress will heed these warnings and lean into its role of serving as a check on presidential power.