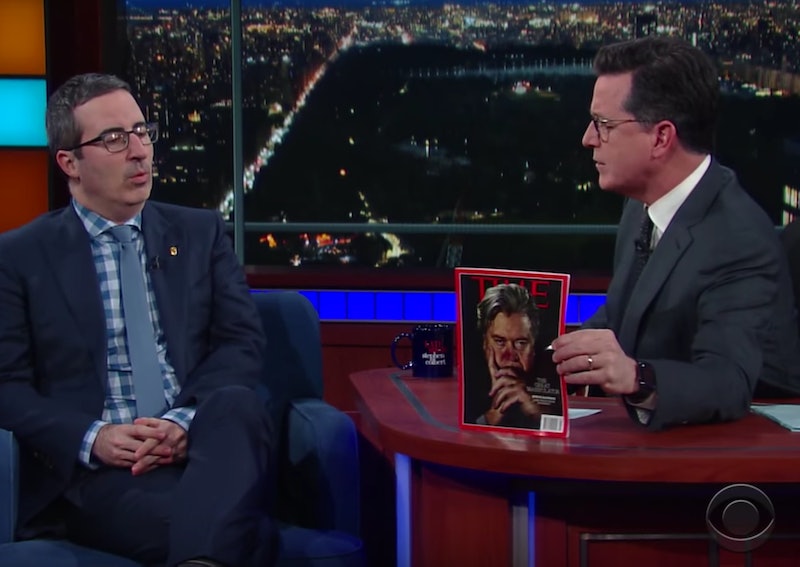 No one has heard from John Oliver since the weekend after now President Donald Trump won the election in November. Well, as of Tuesday night he's back. Oliver went on The Late Show with Stephen Colbert to talk about how the country has changed in the months since. Oliver promised he's only noticed "cosmetic differences — those being flames and that America is in it." So in that vein, he and Colbert discussed some of the new issues facing the country, like whether the British comedian will now be "tossed out like tea" by Trump since he isn't a U.S. citizen.

After a jovial conversation about the state of American politics, things turned rather serious. Colbert pointed out to Oliver, "You're not an American citizen now." Oliver confirmed it and said he's in fact a green card holder like many of those who spent hours in detention or were kept out of the country right after Trump's ban was signed. Colbert then went on to ask, "Are you worried now that Trump is trying to slam the borders shut, that you might be tossed out?" The answer says it all:

Well, the crazy thing is, it's probably not going to happen, right? But, there is a non-zero chance of it happening now, so ya, I am slightly concerned. I have an American wife and an American son now, but who knows what's enough? Having a green card used to be enough, and yet what we saw with that executive order on immigration, that debacle, things are not what they were supposed to be.

Oliver went on to criticize Trump's travel and refugee ban that has for now been stayed. "We held up translators, Afghan and Iraqi translators at the border who have bled for a country they’ve never visited, have sacrificed family members for this country,” Oliver continued. “This president has done neither of those things, so it’s a little hard to swallow him telling people whether they should be a benefit to America or not."

As you can see, Oliver has an uncanny ability to speak truth to Trump when he's not cracking jokes — and often when he is too. But like anyone, Oliver enjoys a break now and again. He told Colbert that he's emphatically glad that he hasn't had to talk about President Donald Trump since the season finale of his show just after the election.

"Until the Inauguration, nothing was really happening." Oliver explained. "It was just being tied to a train track, watching the train coming. And then of course Inauguration Day is the train hitting you and you’re thinking, ‘Yup, that felt pretty much how I thought it was going to feel.’” But even with his show on hiatus, it's been tough.

"It feels like his Inauguration Day were 114 years ago," Oliver said. Then he and Colbert discussed how to resist Trump over the long term. "It's easy to be angry on adrenaline but it's much, much harder when you are just tired," Oliver said. And the HBO foresees this potentially lasting longer than just four years, or even eight. "Why not 12? If words don't mean anything anymore, why should numbers?" he asked, half in jest.

To see Oliver's attempts at resistance, make sure to tune into his show, Last Week Tonight. He'll be back on starting this Sunday, Feb. 12.