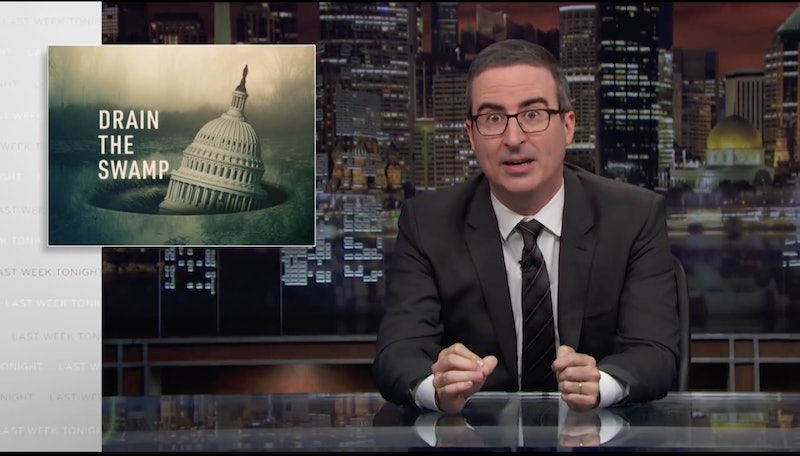 On Sunday's episode of Last Week Tonight, John Oliver's "drain the swamp" segment accused the Trump administration of failing to adhere to this promise. In fact, Oliver suggested that Trump has done the exact opposite of draining the swamp, something which the comedian believes has had detrimental effects on the country.

Oliver opened his main segment by noting that now marks the two year anniversary of Trump embarking on his campaign promise to "drain the swamp" in Washington, D.C. As Oliver noted, the idea of draining the swamp generally refers to "limiting the power of industry lobbyists and special interests" in the U.S. political system.

While Trump promised to "drain the swamp" during his presidential campaign, Oliver noted that he doesn't believe that the president has actually adhered to this pledge. "He has not drained the swamp even one little bit," the comedian asserted. "Trump has a laughable number of wealthy businessmen presiding over policies that could directly benefit themselves and their former employers."

Oliver then suggested that, as a result of Trump's apparent failure to drain the swamp, he believes that "real damage is being done to the 'small guy' by this administration." The late night host cited several examples to illustrate his point.

First, he noted that the acting head of the Consumer Financial Protection Bureau (CFPB), Mick Mulvaney, "has been actively working with the payday loan industry to block rules reigning them in." Oliver asserted that Mulvaney is working to counter these regulations despite the fact that "people's lives can be destroyed by misleadingly marketed high interest loans." The comedian indicated that he believes a conflict of interest is readily apparent in this situation, saying, "Why would he do that? I don't know. But what I do know is that, as a Congressman, he got $60,000 in campaign contributions from the pay-lending industry."

The late night host then used the Environmental Protection Agency (EPA) as another example of where he perceives Trump has failed to drain the swamp. As Oliver described, Andrew Wheeler, the man currently serving as head of the EPA, is a coal lobbyist who has previously lobbied the agency to end certain environmental restrictions that affect the coal industry. Now, as Oliver put it, Wheeler is "running the EPA and dismantling the very regulations he lobbied against, which is ridiculous."

Oliver also pointed out what he believes is another conflict of interest issue at the Bureau of Safety and Environmental Enforcement (BSEE), a bureau within the Department of the Interior that's in charge of keeping "people and the environment safe." The Trump-appointed head of the BSEE is Scott Angelle, who Oliver described as "aggressively pro-[deep sea] drilling."

Notably, Oliver mentioned that Angelle previously served on the board of an oil pipeline company and received around a million dollars for his service. Moreover, in his job as the head of the BSEE, he has openly offered his cell phone number to heads of oil companies so they can discuss "business opportunities," even though, as Oliver pointed out, Angelle is "in charge of enforcing safety in the oil industry." The comedian then noted that, since he began working at the BSEE, Angelle has "urged the White House to loosen [drilling] safety requirements," including through deregulations that are "estimated to save oil companies nearly a billion dollars over the next decade."

Overall, Oliver noted that he believes that the Trump administration's appointees reveal that Trump has not kept his promise to drain the swamp. "Trump has in no way drained the swamp," Oliver asserted. "What he has done is drain the phrase of its original meaning."