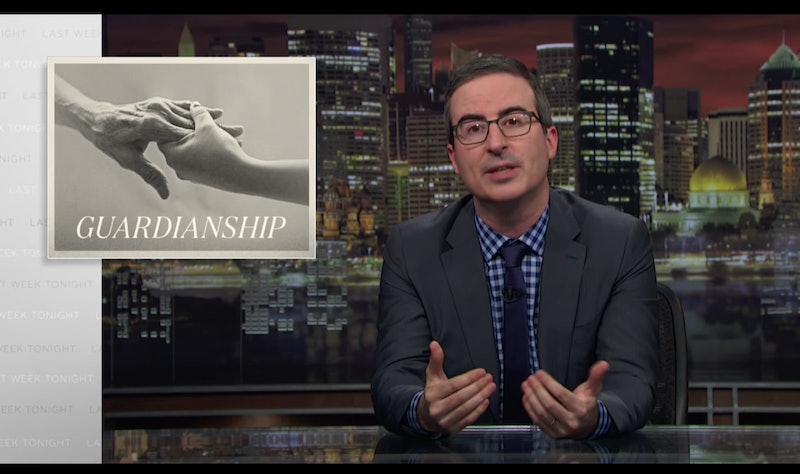 Sunday's episode of Last Week Tonight shed some important light on an issue that affects many Americans, but is perhaps not readily discussed or understood. John Oliver's guardianship segment picked apart the disturbing system that so many senior citizens face, demonstrating how it can strip people of their rights and resources.

Oliver initially played a YouTube clip of Chief Judge Patrick Woodward of the Maryland Court of Special Appeals explaining the guardianship system to help shed light on the issue. As the judge described,

A guardian is someone appointed by the court to act on behalf of an individual who is under a mental or physical disability and as a result is unable to make responsible decisions about his or her care or property.

Oliver then further expounded, saying that guardianship often comes into play when a senior citizen is showing signs of not being able to care for themselves. At that point, anyone can petition a court to appoint a guardian for this senior citizen. The guardian, depending on the court's findings, may either be a family member or a private guardian. A private guardian is a professional, usually a stranger, who is paid to manage a ward's personal affairs.

As the late-night host noted, while there are certainly people who need the services of a guardian, the system is unfortunately fraught with problems. As Oliver explained, guardians have a significant amount of control over the affairs of their wards and, thus, have access to a myriad of very personal entities, like bank accounts and health records. Moreover, being placed in a guardianship often means that senior citizens are stripped of many of their rights. As Judge Steve King of Tarrant County, Texas explained in a clip played on Oliver's show, "Guardianship is a massive intrusion into a person's life. ... They lose more rights than someone who goes to prison."

Oliver then further highlighted the problematic nature of guardians having access to senior citizens' bank accounts. As the host explained, private guardians can charge their wards for each service they provide and can withdraw that money directly from wards' accounts. Moreover, charges are often questionable and exorbitant.

For example, Oliver shared the story of Marie Long, whose family "objected to her guardians taking her on a weirdly expensive outing." Oliver played a CBS clip on his show revealing that Long's guardians had charged her $1,027 to take her to a Phoenix Suns basketball game. Charges related to the outing included fees for research, a limo, telephone calls, and an assessment to "determine the effect of the game on her mood."

In addition to problems associated with private guardians having access to wards' finances, Oliver also pointed out that there are significant shortcomings regarding the process of how private guardians are selected in the first place. As Oliver put it:

Guardianship is the responsibility of state and local courts, meaning, in most places, everything about it — from who becomes one, to who they oversee, to what they can charge — is up to local judges who may be elected and may have no legal training. For instance, in much of Texas, guardianship decisions are made by county judges — only 29 of the judges in those 211 counties are lawyers. The rest, as one judge put it, are "farmers, car dealers, and insurance salesmen."

Moreover, Oliver noted that only 12 states require professional guardians to have any type of certification, meaning that, in much of the United States, anyone can become a guardian. As the host noted, the lack of guardianship oversight "is worrying in a system that can be easy to fall into and very difficult to get out of." As Oliver pointed out, it took one elderly couple that he highlighted on his show over two years to be freed from a guardianship — and, by that time, much of their money had been drained from their account.

Oliver wrapped up his show by noting that, in addition to advocating for systemic changes, there are important steps people can take on a personal level to help protect themselves as they get older. The late-night host then played a clip of several older celebrity guests, including Cloris Leachman, Rita Moreno, William Shatner, Lily Tomlin, and Fred Willard, who had collectively recorded an informercial for the show about the guardianship process, as Time reported. In the clip, the guests advocated for senior citizens talking with their families about plans for their care as they age — and for making sure that anyone who is appointed as their guardian is someone they know and trust.

Overall, as Oliver pointed out, there are currently around 1.3 million senior citizens subject to guardianships — and that number will only continue to increase as baby boomers age. Thus, the host's segment offered an important and timely look into why it is imperative to make arrangements for people's care as they get older, as well as to advocate for reform to the guardianship system as a whole.

More like this
Matt Hancock Broke a Major Rule With I’m A Celeb
By El Hunt
Owen Warner's Net Worth Might Surprise 'I'm A Celeb' Fans
By Sam Ramsden
Here’s Everything Coming To & Leaving Netflix In December
By Jake Viswanath
'Waterloo Road' Is Back, With More Than A Few Familiar Faces
By Sam Ramsden and Vivian Iroanya
Get Even More From Bustle — Sign Up For The Newsletter