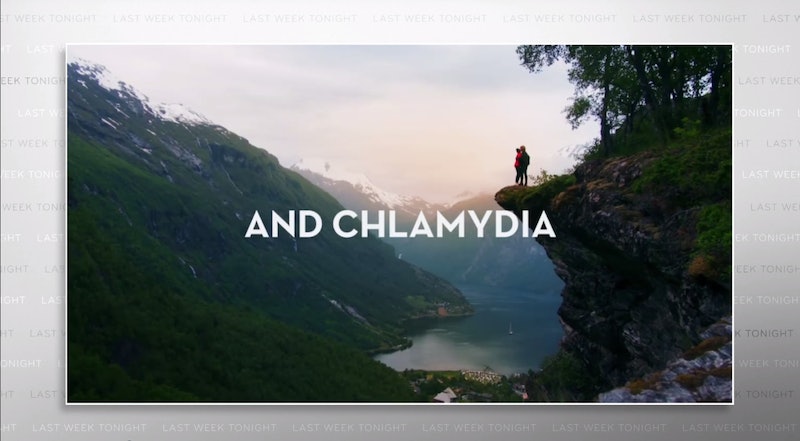 On Sunday's episode of Last Week Tonight, the show's host shared a rather surprising ad being marketed to foreign tourists visiting Norway. John Oliver's Norway chlamydia segment featured a 7-Eleven advising tourists to purchase condoms at its stores in order to avoid contracting the sexually transmitted disease (STD) while traveling through the Scandinavian country.

The host opened his segment by asserting that over 100 7-Eleven stores are actually located in Norway. He then revealed that, recently, the convenience store chain has sparked some controversy with its new Norwegian market television ads and posters, in which it suggests that tourists visiting Norway need to protect themselves against chlamydia.

Oliver played the ad on his show, which opens with a video of majestic mountain scenery. As the ad continues to flash beautiful pictures of the Norwegian countryside, it is accompanied by a description of the things for which Norway is supposedly known. "Norway ... the land of the fjords. The midnight sun. And chlamydia," the ad asserted. The ad then closes out by alarmingly stating onscreen that "Norway has one of the highest rates of chlamydia in Europe." It then suggests that tourists take preventative action if visiting the country, controversially declaring, "Visiting from abroad? Protect yourself against the locals!"

The late-night host was shocked at the 7-Eleven ad, joking after he played the video:

Holy sh*t. OK, 7-Eleven. You can't just call Norway the land of chlamydia, because that's opening yourself up to a class action lawsuit from Las Vegas, Tampa, and the wave pool at every water park.

Oliver then continued his segment by sharing the befuddled reactions of Norwegians who saw related 7-Eleven ads posted in train stations, which read, "Welcome to Norway. Land of the Fjords. And chlamydia." One Norwegian woman interviewed in a clip played by Oliver commented, "Huh? I'm speechless. ... It's unfortunate that we have to have this kind of thing for our tourists." Another Norwegian woman also commented on the posters, saying "Not a very good ad for Norway." And another remarked, "Is this the reason people come to Norway? Sleeping around?"

The late-night host then noted that the 7-Eleven ad is not the only one that has addressed the rate of chlamydia in Norway, though others have not been directed at tourists specifically. As Oliver described, the Norwegian Directorate of Health created posters that bluntly told the public (as translated from Norwegian) to "use a condom on your d*ck " and "use a condom in your p*ssy." Oliver found these ads amusing, saying that they made it sound like "Norwegians had condoms but were just using them wrong, like for keeping their jelly beans fresh or waterproofing their dogs' paws."

The host then revealed that his favorite Norwegian sex-ed ad is from the charity RFSU. Oliver asserted that the ad promotes safe sex in the "greatest possible way." He then played a clip of RFSU's video, which features a giant penis mascot running around, screaming and spraying glitter all over people. The comedian revealed he had many favorite parts of the ad, including:

First ... the screaming, why does he need to do that? Those people have just been shot by a giant sneaky penis; haven't they been through enough? Second, that tagline translates to ... "penis can surprise you." Which just sounds like how an old Russian man hits on you at an airport bar. And, finally, I like that when the penis is about to ejaculate, it bends in half, so the shot forms a right angle.

Oliver's chlamydia segment wrapped up with the host being glitter bombed by a giant stuffed penis on his show's set — something about which the host was (facetiously) not happy.