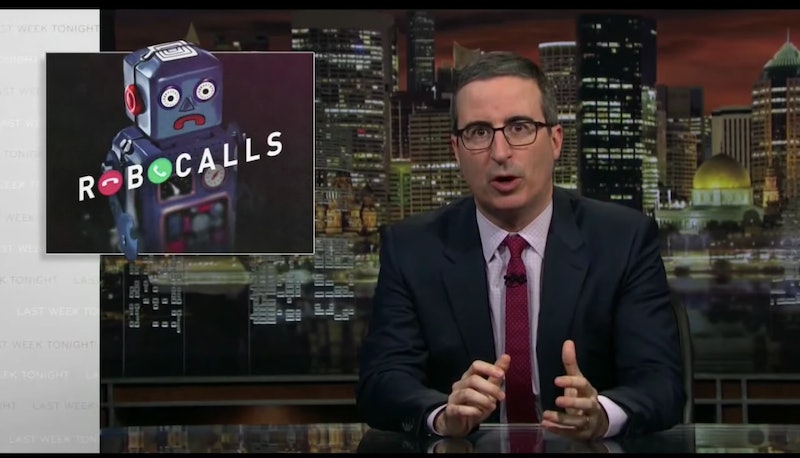 Sunday's episode of Last Week Tonight addressed an issue that plagues many Americans. John Oliver's robocalls segment pointed out that spam calls are on the rise in the Untied States — and reflected on why these calls are so problematic. Oliver also took an ingenious approach to demanding that the Federal Communications Commission (FCC) take action on the issue — by employing robocalls of his own.

As Oliver noted, robocalls, which are automated phone calls that deliver recorded messages, have "increased by 57 percent in 2018, to nearly 50 billion calls." The late night host also pointed out that robocalls account for 60 percent of all complaints to the FCC. "They're definitely aware of the problem," Oliver asserted. The comedian further emphasized that he believes that robocalls are universally irritating to all Americans. "Everybody is annoyed by robocalls. Hatred of them might be the only thing that everyone in America agrees on now," Oliver stressed.

The comedian explained that the FCC, which is currently chaired by Ajit Pai, has the power to help diminish robocalls in the United States, but Oliver believes the agency hasn't done enough to address the issue since Pai became chairman in January 2017. As Oliver pointed out, Pai once praised a court decision that rescinded FCC rules that policed robocalls, calling them "regulatory overreach." These rules had been created under the Obama administration.

Oliver did note that Pai has "urged" telecom providers to help end robocalls. However, the host emphasized that he thinks the FCC needs to take more concrete action on the issue, such as by requiring telecom companies to offer free call blocking and call authentication services to consumers.

Because of the FCC's limited action on the issue, Oliver decided to employ a unique — and somewhat ironic — strategy to demand that the agency help stop robocalls. "If only there was a way to get the FCC's attention on this issue," Oliver commented. "Of course, one way to do that would be if someone had, say, the office numbers of all five FCC commissioners, because then you could hypothetically set up a program to robocall those numbers every 90 minutes." The late night host then shared the message his robocalls will deliver to the FCC commissioners:

Hi FCC! This is John from Customer Service. Congratulations! You’ve just won a chance to lower robocalls in America today. Sorry, but I am a live person. Robocalls are incredibly annoying, and the person who can stop them is you! Talk to you again in 90 minutes. Here’s some bagpipe music.

"That would be really annoying, right, to get that every 90 minutes? It would really drive the point home," the host exclaimed. Oliver then noted that "it turns out that robocalling is so easy that it only took our tech guy literally 15 minutes to work out how to do it."

The comedian ended the episode by making a grand presentation of the process of initiating robocalls to the FCC. On set, Oliver unveiled a large red button complete with a model hand with a pointed finger hanging over it. The late night host also held a smaller red button in his own hand.

"When my finger presses this [small] button, it will trigger this much larger finger, that will press a much larger button, which will trigger our calls to the FCC," the host said. "FCC, you know what you need to do." Oliver then epically concluded his show by pushing the button and saying, " ... It's ringing, I think it's for you! ... Pick up! Pick up!"