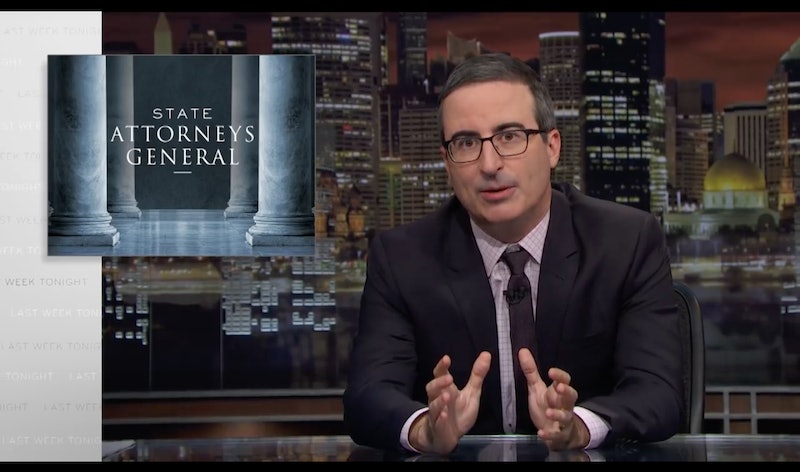 On Sunday's episode of Last Week Tonight, host John Oliver's state attorneys general segment described why these elected officials play such crucial roles in interpreting laws and policies across the United States. In addition to explaining the important nature of their jobs, Oliver also encouraged voters to research attorneys general races in their respective states — and to cast their ballot in these races in the upcoming November midterms.

Oliver noted that 30 different states will hold elections for their attorneys general on Nov. 6. The comedian also indicated that, this year, these elections are "going to be more competitive than ever," with a total of around $100 million being spent on these races nationwide. Because of the competitive nature of these races and the important roles that state attorneys general play across the country, Oliver believes it is essential that viewers know as much as possible about this topic.

As Oliver explained, state attorneys general are considered the "chief legal officer" of their state, essentially acting as the "people's lawyer." The comedian noted that their responsibilities "range from criminal law enforcement to consumer advocacy to anything in between." He then cited several big initiatives for which state attorneys general were responsible, including the 1990s' tobacco industry settlement and 2018's report containing extensive abuse allegations against Catholic priests in Pennsylvania.

Thus, as Oliver noted, the work of state attorneys general can hold varying significance for voters depending on their political viewpoints. "It's interesting how your feelings on suing the government can change a lot depending on who is saying it," Oliver asserted.

Overall, though, because state attorneys general are both "powerful [and] increasingly partisan," Oliver believes it is imperative that voters participate in the myriad state attorneys general races happening on Nov. 6. Indeed, Oliver noted that, "It is really worth taking a few minutes to research the candidates," especially because many voters typically leave the state attorney general box blank on their ballots. This means that, if you do vote, your vote could carry even more weight.

Indeed, Oliver is so committed to ensuring that people research their state's attorney general candidates (if applicable) that he closed out his show early to encourage voters to use the time to look up these races. As the host put it:

Taking just two minutes to research your state's AG is a valuable use of your time. And if you are thinking that you don't have two minutes, you actually do. Because it's 11:28 right now. I'm not saying goodbye until 11:30. So go to www.vote411.org right now, where you can find out if there's an election in your state and, if so, who your AG candidates are.

Finally, in an extra push to drive viewers away early to research state attorneys general races, the host brought on several musicians to play a host of discordant tunes at the same time, including a bagpipe player, an accordionist, and children playing recorders. Clearly, the comedian is doing everything he can to ensure that voters are prepared for Nov. 6.