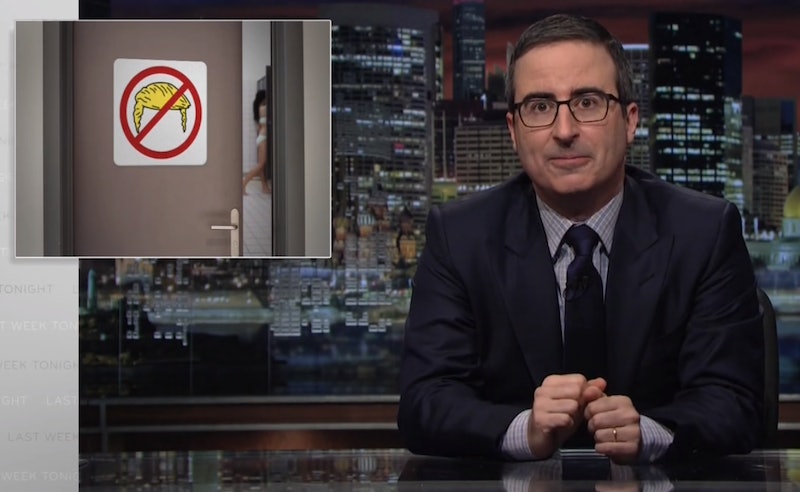 President Trump seems to have veered off course a bit from his campaign goal to "Make America Great Again." Instead, as John Oliver puts it, Trump's actions this past week are to "Make Entire Subsets of the American Citizenry Concerned About Their Safety and Well-being Again!" Or hashtag #MESOTACCATSAWA. One of those biggest subsets are transgender students. The Trump Administration rolled back Obama-era protections for these kids in public schools, and Oliver is none too happy about it. The Last Week Tonight rant Oliver gave on transgender student protections can't be missed because he makes an epic point regarding Trump.

As you probably know, Trump's Departments of Justice and Education released memos last week ending the protections that were established under Obama. In case the finer points aren't clear, Oliver broke it down for you:

All the guidelines recommended were that students be called by their preferred name and pronoun, be allowed to use the restrooms and locker rooms consistent with their gender identity, and regardless of gender, be able to wear a tux to prom or a dress in yearbook photos, which is a good rule.

"If the government wants to address an actual problem with yearbooks, maybe ban quotes by Dave Matthews," Oliver went on to joke, putting up a fake yearbook entry on the screen of a Dylan Nuccio with lyrics from the song "So Much To Say." Oliver continued, "Oh, really, Dylan? You've got so much to say? Evidence is stacking up to the contrary."

On top of that it's "gratuitous," Oliver argues. The guidelines were suspended by the courts in 2016 and there's a case before SCOTUS that would soon decide whether Title IX, which protects against sex discrimination in schools can be interpreted to include protections for gender identity and expression.

So it's probably about something else. Oliver says, "Anti-transgender rules like bathroom bills are almost always rooted in deep sexual fear-mongering. The idea that they would provide covers for predators to sneak in to ladies locker rooms, despite the fact that there is virtually no evidence of that happening."

Here comes his epic point: "What there are reports of," Oliver alleges, "are of Trump himself barging in on women and teenagers who competed in his pageants while they changed." The allegations Oliver makes came from a BuzzFeed piece published in October. Trump's presidential campaign released a statement denying the charges at the time. Bustle has reached out to the White House for comment.

It's impossible to know, of course, what actually happened at the pageants, but as Oliver points out, "In characteristic style, [Trump] has both denied and been recorded on tape bragging about." So, here's what Trump told Howard Stern on the matter:

I’ll go backstage and everyone’s getting dressed, and everything else, and you know, no men are anywhere, and I’m allowed to go in because I’m the owner of the pageant and therefore I’m inspecting it... You know, they’re standing there with no clothes. "Is everybody okay?" And you see these incredible looking women, and so, I sort of get away with things like that.

"Ya, you do seem to sort of get away with it," Oliver alleges. "So if we really want to protect women from predators, lets stop wasting our time with pointless, vindictive bathroom laws and instead launch a 'military operation' to ban the president himself from women's rooms nationwide."

And that Oliver sure is the king of clarity — and that should end the debate on bathroom bans once and for all.