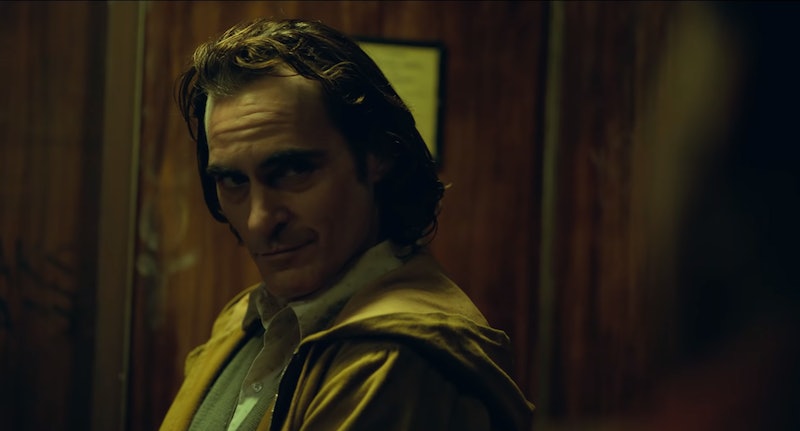 Batman has made plenty of appearances on the big screen, and in each outing, he's faced a true rogue's gallery of villains, each of them legendary in their own right. But some of Batman's most memorable outings have been when he goes toe-to-toe with arguably his greatest nemesis: the Joker. The two are often shown on screen as inseparable in all of the worst ways, but in Joker, the connections to Batman movies aren't all that significant. When it premieres in theaters on Oct. 4, audiences can judge for themselves whether this Joker's independence from the rest of the DC Extended Universe is a good thing or not.

Joker follows Arthur Fleck (Joaquin Phoenix), a street clown and failed comedian who, after a series of increasingly tragic setbacks, eventually embraces crime and becomes the Joker. The name "Arthur Fleck" hasn't appeared in the DCEU anywhere else, nor in the comics canon. And the origin story presented in the film is an entirely original one for this longstanding criminal identity. According to Gamespot, in a Q&A following a Los Angeles preview screening of Joker, director and co-writer Todd Phillips said, "We kind of picked and chose what we liked from the 80-year canon of Joker."

So Joker doesn't deviate from the Batman canon completely. Thomas Wayne (Brett Cullen) is a fairly major character; the billionaire is running for office during the events of Joker. (In the final trailer, the elder Wayne punches Arthur in the face.) The film also features the Waynes' faithful butler, Alfred Pennyworth (Douglas Hodge), and a young Bruce Wayne (Dante Pereira-Olson). This isn't a verison of Gotham where the powerful family doesn't exist. In fact, they play a role in the creation of the Joker.

Thus far, the Joker's origin story has been directly shown only once on film: in Tim Burton's Batman (1989). Jack Napier (Jack Nicholson) is originally a righthand man to Boss Carl Grissom (Jack Palance), a gangster in Gotham City. He becomes the Joker after Carl sets him up to be killed by crooked cops at a chemical plant. There, Jack is shot and falls into a vat of chemicals — an echo of other Joker origin stories from the comic books — only to emerge later, unhinged and hell-bent on terrorizing Gotham. Indirectly, Christopher Nolan's The Dark Knight plays with the idea of a Joker origin story, with Heath Ledger's iconic turn as the villain partially defined by the grim stories he'd tell about how he got his facial scars.

Following Nolan's Dark Knight trilogy, DC launched the DCEU, which featured Ben Affleck as Batman in 2016's Batman v Superman, 2016's Suicide Squad, and 2017's Justice League. Also a filmmaker, her was reportedly working on his own Batman film before he decided to leave the role behind. Per IndieWire, Affleck opened up about his departure on Jimmy Kimmel Live! this past February, saying, "I tried to direct a version of it and worked with a really good screenwriter but just couldn’t come up with a version. I couldn’t crack it and so I thought it’s time for someone else to take a shot at it."

Affleck's successor, Robert Pattinson, is set to take over in yet another reboot, The Batman, slated for release June 2021. Directed by Matt Reeves, the film is, according to Deadline, not a part of the same canon as Affleck's Bruce Wayne, though little else has been revealed so far about the plot. At the Toronto International Film Festival, when Variety asked Phillips if Pattinson's Batman and Phoenix's Joker would appear in a movie together in the future, Phillips simply said, "No, definitely not."

Some of the other immediately forthcoming films in the DCEU — namely Wonder Woman 1984 (June 2020) and Birds of Prey (February 2020) — will remain consistent with the existing DCEU storyline. Gal Gadot, Robin Wright, Chris Pine, and Connie Nielsen are returning for Wonder Woman 1984, connecting that film to the universe with Affleck's Batman character via Gadot's connection to 2017's Justice League. In Birds of Prey, Margot Robbie reprises her Suicide Squad role as Harley Quinn. The Flash standalone movie, which will likely arrive in 2021, features Ezra Miller, who was part of the Justice League film.

Jared Leto took on the Joker in Suicide Squad, but whether the actor will return to play him again is in question. While a cameo could still happen, he's not currently slated to return in 2021's The Suicide Squad, as his name is missing from a cast announcement shared by director James Gunn on Twitter. Asked about a Joker revival in Birds of Prey on Variety's Big Ticket podcast, Leto said, "I don’t think so. You’d have to ask them." However, he also said he "would definitely play" the character again someday if the circumstances were right.

That said, as far as continuity is concerned, Leto's Joker is the Joker for that main DCEU storyline, so introducing a new Joker — say, Phoenix's — seems a bit farfetched. Also, the timeline wouldn't add up.

Per Gizmodo, at a Los Angeles screening of Joker, Phillips explained the late '70s/early '80s setting of Joker saying, "One reason was to separate it, quite frankly, from the DC Universe. When we pitched it to Warner Bros and handed the script in, [we wanted to] make it clear, this isn’t f*cking with anything you have going on. This is like a separate universe, so much so that it takes place in the past before everything else."

So while Joker seeks to give audiences a new perspective on the classic villain, it's a vision that will almost certainly stand completely alone.

More like this
Anne Hathaway Shared A "Thrilling" 'Princess Diaries 3' Update
By Darshita Goyal
The 'Scream 6' Trailer Shows Off Hayden Panettiere's Return & Ghostface In NYC
By Jack Irvin and Jake Viswanath
Your Guide To Watching 'Everything Everywhere All At Once' In The UK
By El Hunt and Sophie McEvoy
Rupert Grint Just Shared A *Major* Update About Ron Weasley’s Future
By El Hunt
Get Even More From Bustle — Sign Up For The Newsletter
From hair trends to relationship advice, our daily newsletter has everything you need to sound like a person who’s on TikTok, even if you aren’t.