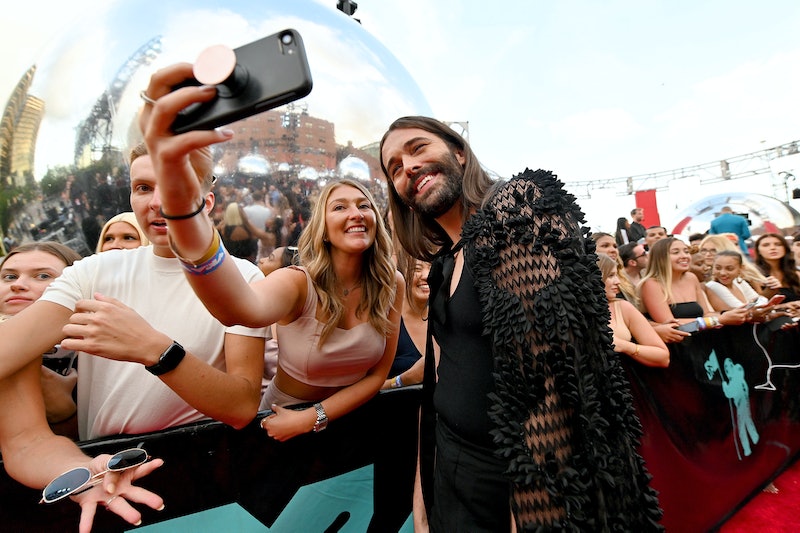 It's as fun to be a presenter as it is to be a nominee or performer at the MTV VMAs. So much happens — from Taylor vs. Kanye to Miley Cyrus' twerk fest, the show is always a wild ride. It's no wonder Queer Eye's Jonathan Van Ness said "yes" to presenting. Jonathan Van Ness' 2019 VMAs look was a fresh take on the red carpet staple that is the LBD. JVN rocked an all-black short-and-tank set. He paired it with a crocheted cape and matching pumps. If you used to think that a monochromatic look is boring, JVN probably just changed your mind.

Update: Van Ness' cape was Atelier by FANG, according to press materials received by Bustle.

Since Van Ness is a stylist and grooming expert who has cultivated his own inimitable personal style, his outfit was certainly high up on the list of "must-see" looks for fans of the show. Even though it's his job to help others get done up, JVN certainly enjoys strutting his sartorial stuff on red carpets and on his highly entertaining personal Instagram as well. Whether he's wearing a skirt or sky high heels, JVN owns it every single time.

The most epic element of JVN's all-black presentation was that cape. It tied in the front and flowed around him. Fans may have been hoping he would rock a long skirt since he often favors those when at public events. But he opted for a short construction in the front and the long cape in the back. It was his unique take on the mullet, high-low hem.

This member of the Fab Five is known for his long and flowing brown locks and his meticulously 'scaped beard and mustache. He wore his strands down and framing his face.

Of course, JVN's signature beard was also as groomed and as cool as ever. While Van Ness sometimes has a curl at the end of this handlebar mustache, he ended up going with a simple beard style this evening.

Here's a look at JVN’s entire ensemble from the VMAs. This appears to be the first time he has been involved in the event and he truly brought it. The old adage that you never get a second chance to make a first impression applies here.

Fans will remember that Van Ness was the first-ever male ambassador for Essie, the popular drugstore nail polish brand. However, he appeared to go with polish-free nails at the VMAs. Still, his hands still attracted attention since he carried a pink and crystal-encrusted Chanel clutch.

JVN loves and slays a skirt when out and about. He even does so with a pair of sneakers and sheer shirt. Is there any look he can't pull off? Nope. Whether it's a print and patterned skirt or his interpretation of an LBD mini, he owns it.

Van Ness' style is so unique and refreshing. He always adds a touch that you don't expect, like these plush and plaid sandals. His VMAs look was much the same due to that stunning cape. JVN basically just made capes happen. Say hello to Fall 2019's newest trend.