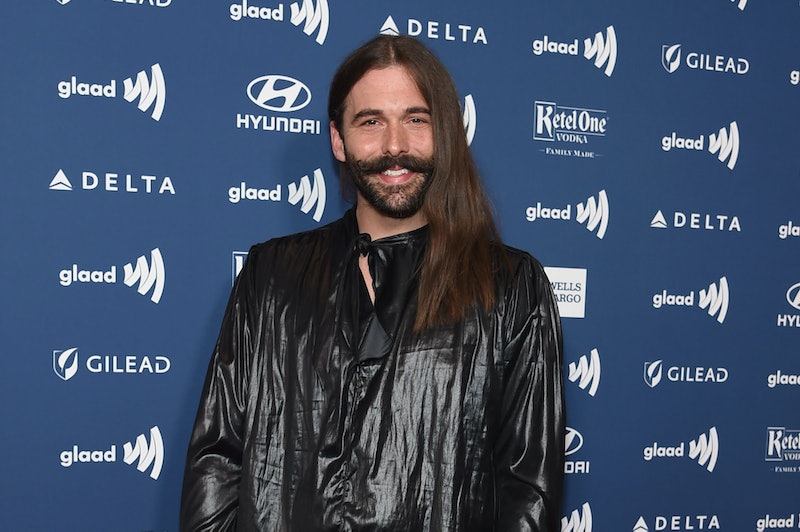 Jonathan Van Ness has a lot to say about his own health, and he has a lot to offer about yours. And he's not stopping with the kinds of grooming expertise to boost your general life health that he shares on Queer Eye. The reality show star has recently revealed that he's HIV positive, and he wants you to get tested for STIs, too. In a new Planned Parenthood video, JVN explains why STI testing is so important, and it's pretty much required viewing.

Van Ness — who is non-binary and uses he/him pronouns — said in a September 2019 interview with The New York Times that he was unsure of whether to come out as HIV positive when Queer Eye first started. "And then I was like, ‘The Trump administration has done everything they can do to have the stigmatization of the LGBT community thrive around me," he told the Times. Therefore, he said, "I do feel the need to talk about this."

In the lead-up to the release of his memoir, Over the Top: A Raw Journey of Self-Love, Van Ness has teamed up with Planned Parenthood to encourage you to get tested for STIs. "Everyone deserves a sex life that is safe, fun, and empowering," Van Ness explained in his whimsical Instagram video for Planned Parenthood.

To help make this an option for people who want to have sex, Planned Parenthood provided more than 4.7 million tests and treatments for STIs in just the last year alone. Van Ness also pointed out that most people who have sex will get an STI at some point in their life, but not all STIs have visible symptoms.

This is especially important because, according to a 2015 report by GLSEN and AIDS United, trans women of color and G/B men of color are more likely than their peers to be HIV positive because access to queer sex education is so rare. And because quality sex education for trans and non-binary people is so hard to come by, Florida State University released a guide to safer sex for trans and non-binary people, which includes various ways to enjoy safer sex, no matter what body parts you and your partner(s) may have, or how you want to have sex.

But it's easy to think you're not at risk of getting an STI if no one's ever talked to you about the possibility. When school sex ed curricula do not include LGBTQ-specific information, LGBTQ young people are at higher risk of getting STIs. According to a 2019 study published in The Journal of Adolescent Health, queer students who don't have access to queer-inclusive sex ed are more likely to experience depression and suicidality. And people who have depression are more likely to have unprotected sex, according to a 2019 study published in the Psychiatry Journal.

So when Van Ness said in his Planned Parenthood video that you deserve access to free and low-cost STI testing, he didn't only mean that you should (if you can, emotionally and otherwise) fight for Planned Parenthood's ability to continue providing these testing and health services. He also wants you to know that even if you don't think you need to, it's always a good idea to check in with your body and get tested. Because if you want one, then as JVN said, you deserve a "healthy and sexy relationship," with your partner(s) and, first and foremost, with yourself.