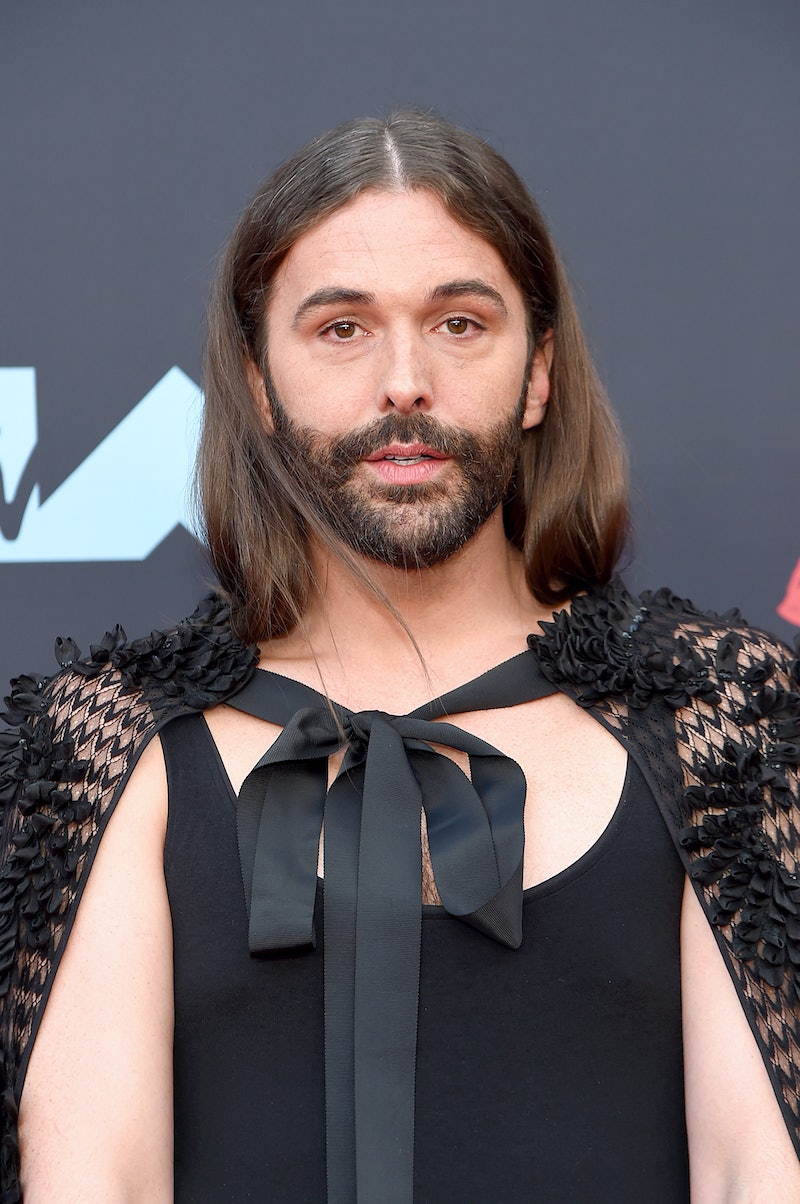 In a conversation with The Allure Podcast, Queer Eye star Jonathan Van Ness opened up about his eating disorder. The reality star is an honest celebrity, who discusses parts of his life that some people might not be comfortable sharing with the world. In addition to Van Ness recently revealing he's HIV-positive, he also explained to Allure's podcast that a lack of male body image talk contributed to him battling an eating disorder in the past.

While discussing how his relationship with his body has evolved over the years, Van Ness said, "Well, I think that a lot of things I used to like kind of panic and react to like feeling like I needed to do a whole bunch of work to make myself conform or fit in to what I thought I was supposed to be like." He even went vegan in his early to mid-20s after reading Skinny B*tch, and learning about the "social, environmental implications" of veganism. But, what really pushed the Queer Eye star to go strictly plant-based at that time of his life was that he believed he had to look a certain way to be found attractive. He told Allure, "But the thing that was really driving it more than that was my desire to be loved and accepted by men, so I thought I needed to be skinnier and like lose weight, so I did."

Eventually, Van Ness developed an eating disorder. He said what contributed to his food issues is that male body image isn't discussed as often as it is for women. "We talk about that a lot, especially from a female-oriented perspective, we talk about body shaming, body positivity and what the female gender encounters in that realm," he explained. "I think in the male side that is not talked about quite as much, and I know that I was severely impacted by that my whole life. Eating disorders, weird relationship with food, for sure."

According to The New York Times, Van Ness opens up about binge eating in his 2019 memoir, Over the Top. He reportedly started binge eating due to his lack of self-esteem and even more so after his stepfather died. As you can see in an Instagram Van Ness posted in April 2018, he revealed he gained 70 pounds in three months following the death of his stepfather. "I didn’t like how I felt or looked, it’s so important for me to look back and tell that man from 5 years ago he was lovely and gorge," he wrote. "I can celebrate where I am now as long as I send love to the 'me's' along the way."

It took Van Ness a long time to realize that unrealistic beauty standards are exactly that — unrealistic — or as he told Allure, "narrower ideas of what beauty are." He profoundly told the outlet, "And really, it's realizing that this system doesn't fit me. It's not that I don't fit the system. I don't see the system like that." He knows that his idea of beauty isn't for everyone, but that's not going to stop him from being his true self.

He's learned to accept and love himself for who he really is. Like the dedication in his book states, "Imperfection is beautiful. To anyone who has ever felt broken beyond repair, this is for you. If you've ever been excluded, or told you were not enough, know that you are enough, and beautifully complete."

It's important to keep in mind that both men and women deal with body image issues. No one should have to conform to unrealistic beauty expectations, because, as Van Ness continues to teach others, beauty comes in all forms.