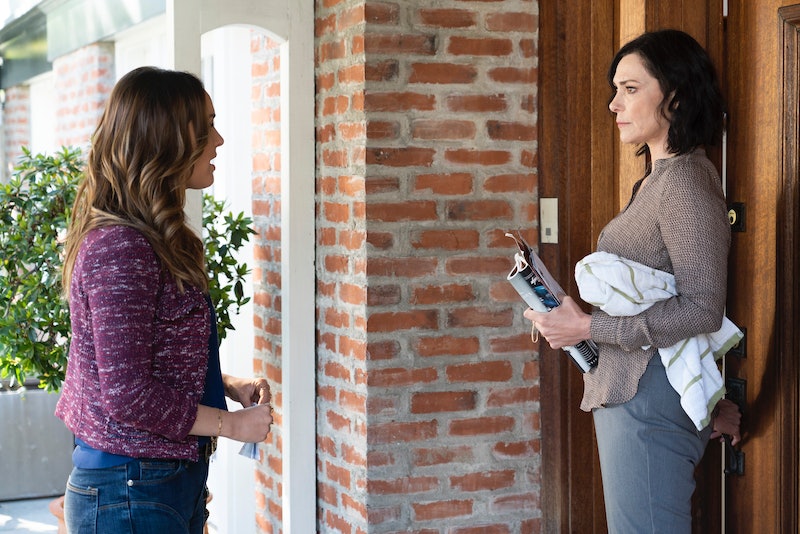 Jo's past on Grey's Anatomy has always been a mystery revealed bit by bit. We know she never knew her birth parents, that she lived in her car for a time, and that she even changed her name in order to escape an abusive husband. It's clear that she's overcome so much to get to where she is now, successful, and happily married to Alex. But Jo's Grey's Anatomy episode with her mom seems like it's about to throw another unexpected wrench into her life — the trailer shows what might've been a happy reunion quickly turning to tears.

According to showrunner Krista Vernoff, there's a reason this upcoming episode, in which Jo finds her birth mother for the first time, is being touted as one of the most powerful ones Grey's has ever delivered. Vernoff told The Hollywood Reporter that Jo's episode is inspired by Dr. Christine Blasey Ford's testimony about Brett Kavanaugh.

“With the Supreme Court situation that happened this year, I wrote the writers and I said, 'We have to do something about consent. It hurts me too much. We have to do something.' It was the only time I can point to where I came at them with an issue and the story evolved,” Vernoff said. "What these great writers brought to it is so much character and so much humanity and so much heart."

It's unclear exactly how Ford's testimony — in which she alleged that now-Supreme Court Justice Kavanaugh sexually assaulted her at a party when they were teenagers — will play into Jo's story. But it's likely that the show won't specifically address Ford or Kavanaugh, and will instead focus on the overall themes of consent and sexual assault — they've tackled other ripped-from-the-headlines issues in a similar way countless times before.

This week's episode is also titled "Silent All These Years," which hearkens back to Ford's story, and the idea of remaining quiet about an assault even years after it occurs. "Silent All These Years" is also the title of a song by Tori Amos, who has been open about her own experiences with sexual assault and is heavily involved with the Rape, Abuse, & Increst National Network (RAINN). Vernoff didn't draw any specific parallels to that clue, but it seems too telling to be coincidental.

This definitely isn't the first time Jo's character has revolved around the idea of a woman telling the story of her trauma. Last year, in the wake of her domestic abuse storyline, actor Camilla Luddington told Bustle that Jo's narrative was all about finding strength after unimaginable hardship.

"This is really a story about women no longer being silent, and women finding the strength to use their voice and to be heard and to be believed," Luddington said. "So this absolutely goes along with the Time's Up movement and everything that we see happening right now."

Now these themes have resurfaced for Jo, who's always been an intriguing character full of resilience and fight. Given the circumstances surrounding Jo at this point in the show, it feels like her mother may have experienced an assault similar to Ford's. Some viewers are speculating that Jo might learn her biological father is the one who assaulted her mother, which would no doubt be a huge revelation to come to terms with. It's too soon to tell exactly how everything will go down, but this premise certainly sets this week up to be one of Grey's Anatomy's most emotional yet.