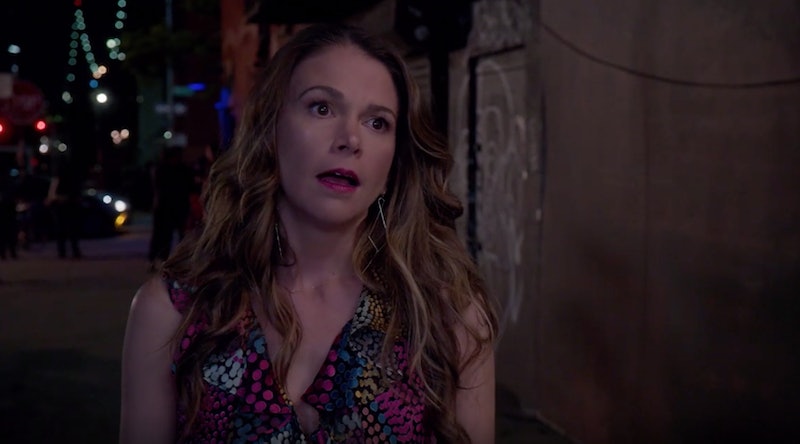 Spoilers ahead for Younger Season 6. During the last Younger episode, Liza wrote a letter to Josh telling him that she cannot see him anymore out of respect for her relationship with Charles. Liza has been trying for a while to make her relationship work with Charles, but at the end of the episode Josh finally told Liza what Younger fans have been thinking all season long, or more accurately, for the entire run of the show. And it did not go well. At all.

Liza tried to just strut by Josh on the street during Diana's bachelorette party, but he called her out as she attempted to walk away. He asked, "Seriously? You're just going to write me a letter and then never talk to me again. That's the plan here?"

Liza has been bending over backwards to show her feelings for Charles, but should it really be this difficult? She has been constantly reassuring him (and herself) for a long time. And finally, Josh confronted her about it. Josh asked, "Is Charles that much more important to you? Are your feelings for him that much stronger than your feelings for me?"

Josh made Liza "admit" that she loved Charles more, but it wasn't the most believable declaration. Josh told her, "You forget, Liza, I know you. I know when you're lying, especially to yourself. You wrote a letter to the wrong guy." She didn't even deny that.

The episode ended with with a "Dear Charles" note, but when the camera zoomed out, it was actually Kelsey who was writing to her boss. Does this mean Charles will get a personal and professional rejection letter during the next episode? Or will Liza double down on her commitment to Charles and continue to ice out Josh?

This is the first time that Josh leveled with Liza since she started dating Charles, but fans have been very vocal about this love triangle on social media.

How would it make any sense for Liza to just "not see Josh" forever? He is friends with all of her friends. Plus, this show would be pretty boring if Liza actually managed to avoid him.

Stability is great, but for a scripted TV show? It's a bit of a yawn. These two just don't have much of a spark at this point. But, Liza and Josh, on the other hand, have a strong connection.

Yes, Liza is a fictional character, but how does she not see this? She and Josh need to get back together.

There is nothing wrong with Charles. He's an accomplished businessman, a devoted boyfriend, and a family man. He's just not "the one" for Liza and it is obvious to outsiders.

There is so much about Charles and Liza's dynamic that makes sense. They are around the same age. They're both in publishing. They have made major sacrifices for each other. There is no shortage of good things, but sometimes even the best list of attributes can only go so far. The connection between Josh and Liza goes beyond good chemistry. The depth and comfort of their relationship is undeniable.... to everyone but Liza.

More like this
Does 'Locke & Key’s Ending Mean There Could Be A Season 4?
By Sophia Moore
Everything To Know About 'Loot' Season 2
By Kadin Burnett
Steve Martin Hints That He May Retire After 'Only Murders In The Building'
By Jake Viswanath
Here’s The True Story Behind 'A League Of Their Own'
By Morgan Leigh Davies
Get Even More From Bustle — Sign Up For The Newsletter