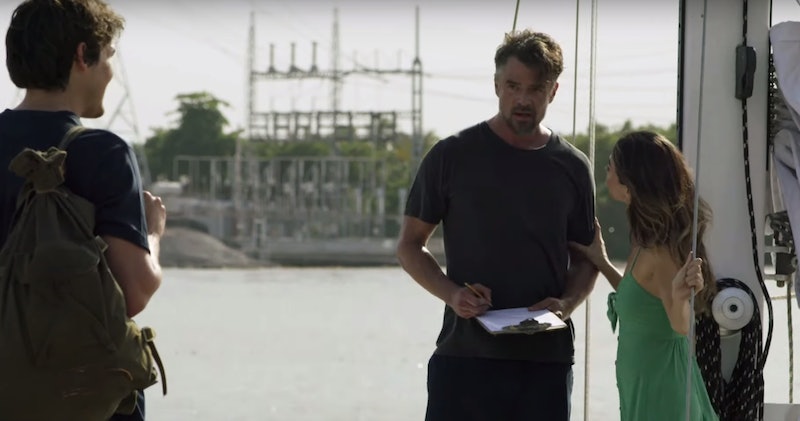 In recent years, Discovery Channel has prided itself on its true, educational content about sharks for Shark Week. But, this year, the network is mixing things up with its first scripted feature film. Don't worry, though, Capsized: Blood in the Water is based on a true story, according to a Discovery press release — so there's still an educational factor there. The press release says the movie depicts an October 1982 ship capsizing that left the crew trying to survive in the Atlantic ocean for days while sharks surrounded them.

Per TV Insider, the movie stars Josh Duhamel as Captain John Lippoth, Rebekah Graf as his girlfriend Meg Mooney, and Beau Garrett, Josh Close, and Tyler Blackburn as sailors Deborah Scaling, Mark Adams, and Brad Cavanaugh. Those names, combined with the October 1982 timeline, reveals which true story the movie is inspired by.

According to Popular Mechanics, the real story closely mimics the Shark Week take. In 1982, a captain, his girlfriend, and three sailors were sailing a yacht (named the Trashman) from Maryland to Florida when a storm caught them unaware. The yacht sank, leaving the crew to fend for their lives on a lifeboat. The Star reported that they had no food or water, because their emergency gear had previously been taken by the storm. They were also off the coast of North Carolina, which is a highly trafficked area for migrating sharks.

Popular Mechanics reported that the captain's girlfriend was injured during the sinking, and her blood attracted sharks, who closely followed the raft. People magazine reported that the sharks in question were tiger sharks.

Tiger sharks have a reputation for eating just about anything, and they've even earned the nickname "garbage can of the sea." (I don't want to make a joke here about the yacht being named Trashman, but just know that I did think about it.) As Bustle previously reported, tiger sharks have been found with everything from license plates and tires to suits of armor and video cameras in their stomachs.

And while fatal shark attacks are low (on average only six people die per year worldwide), one or more of the Trashman crew could find themselves in dire trouble in the movie version of the event. I won't spoil the ending, but let's just say... it gets intense.

If it follows the true story, it will include hallucination, people drinking sea water, catastrophic injuries, and a desperate hope for rescue from a passing Russian ship days after capsizing.

TV Insider reported that Howard Swartz, Discovery's senior vice president of production and development, didn't want the film to "demonize" sharks. "One thing we've done really well over 30 years is celebrate sharks and try to get away from the perception of them as these mindless killing machines," Swartz said.

However, the trailer for the movie (above) is terrifyingly dramatic, so viewers may walk away a little frightened... at least of sinking off the coast of North Carolina with nothing to eat or drink and only a life raft to keep them alive. That's a healthy fear. But as the six deaths per year worldwide shows, sharks themselves are not really out to get humans — even if they do get some humans in this movie.

More like this
The Plane Crash In 'Dear Edward' Is Based On A 2010 Tragedy
By Grace Wehniainen
ITV's 'Maternal' Was Inspired By A Very Simple – & Unanswerable – Question
By Maxine Harrison
Gerard Butler Insisted On Adding This Pivotal Scene To 'Plane'
By Catharina Cheung
Jemima Khan Used Her Own Life As Inspo For 'What’s Love Got To Do With It?'
By Darshita Goyal
Get Even More From Bustle — Sign Up For The Newsletter
From hair trends to relationship advice, our daily newsletter has everything you need to sound like a person who’s on TikTok, even if you aren’t.