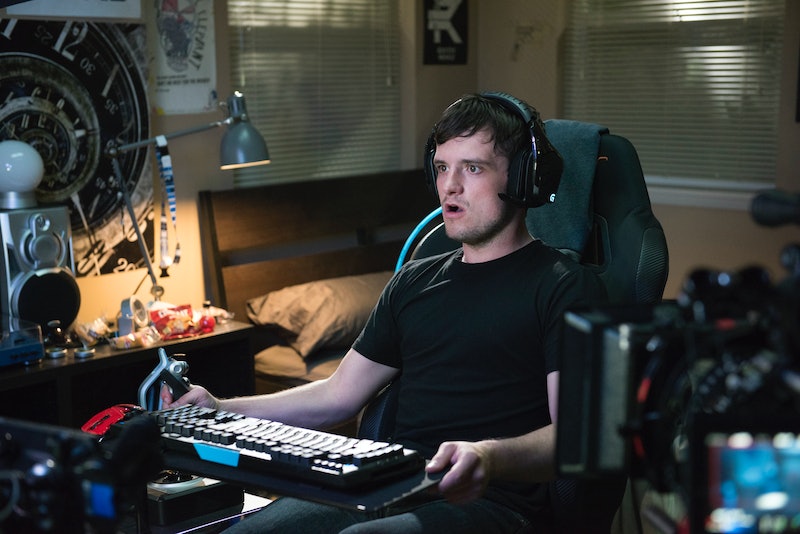 Future Man's Josh Futterman (Josh Hutcherson) kills hundreds of people every day, but if you asked him about it, he'd probably argue that they're virtual mutant people, not actual people. As a janitor living with his parents, Josh dives into Bionic Wars, his favorite video game, as an emotional escape, to be the hero he never believed he could be. But things take a mind-bending turn when he discovers that Bionic Wars is actually a recruiting tool from the future to find the "savior" who can rescue humanity from the coming apocalypse. What follows in Hulu's Seth Rogen-produced Future Man is a raunchy comedy that actually has something to say about how people are molded by violent video games.

When Tiger and Wolf, two Bionic Wars characters Josh has spent so much time with virtually, show up in the flesh at his house to enlist him to stop the end of humanity, the situation appears to be a dream come true for our schlubby hero. But despite knowing what Tiger and Wolf are capable of in the virtual world, when he sees them IRL, Josh is quickly unsettled by his new companions' need to beat anyone who stands in their way within an inch of their life.

"Josh is totally desensitized to [video game violence]," Future Man producer Kyle Hunter explains, "and when he sees it up close and there's blood and people are getting killed in front of him, he just does not have the real stomach for it.” Josh, then, is a perfect example of how many video game players are drawn into the virtual violence of a game, and in doing so fail to learn about the consequences of actual violence.

Of course, the controversy surrounding violent video games stretches back to the early 1990s, when video games were starting to become a major part of the media landscape. At that time, game developers were attempting to cater to older audiences through more violent, adult-oriented games including the hyperviolent Mortal Kombat franchise and the interactive movie/computer game Night Trap. In 1993, the U. S. Senate held a committee hearing on the nature of violent video games, during which then-Senator Joe Lieberman announced that he’d “like to pass a law saying you can’t produce this stuff anymore.” That didn't happen, and in nearly a quarter-century since those hearings, the increasing capabilities of graphics and the advent of virtual reality have only helped make video games more violent and more realistic than ever before.

There are still conflicting opinions and studies that examine the extent of the psychological effects video games have on people. Some experts say the games are responsible for a growing number of people being desensitized to real-world violence, while others suggest there is no correlation between video games and a lack of empathy when it comes to actual violent acts. Matthew Grizzard, a PhD in Communications who works at the University at Buffalo, told Bustle that what it comes down to is the games’ approach to violence. “Certain types of content can make violence seem less objectionable than other types: Justified violence, committed by liked perpetrators, with few cues to the real consequences associated with it (e.g., the pain and suffering inflicted) is more likely to desensitize players than other types,” he said. In fact, there’s an entire genre of game dedicated to simulating real-life violence while ignoring the drastic repercussions of the player’s actions.

The military shooter genre, which includes major video game franchises like Call of Duty and Battlefield, puts players behind the guns of soldiers that are fighting in real wars from history. Although one might not realize it while watching Future Man, Josh's Bionic Wars game is also a military shooter – just for a real war that hasn't happened yet. Making war into a game has been commonplace since the advent of chess, but the commonplace nature of military shooter games may be leaving a generation woefully uninformed when it comes to the realities of war. As Grizzard explains, military shooters "are likely to craft emotional responses that do not line up with the reality of war. We typically like to enjoy our entertainment experiences. Video games simply can’t portray the realities of war, and even if they could, no one would want to experience that reality.”

Call of Duty and Battlefield don’t promise to be accurate representations of war, unlike Future Man's fictional Bionic Wars, which is intended for recruitment. But while the video-game recruitment effort in Future Man may seem unfathomable in real life, a very real military-sponsored game has been readily available since 2002. The America’s Army franchise, titled the “Official Game of the U. S. Army,” launched in 2002, and appears to have been crafted to try and replicate a soldier’s real experience. However, America’s Army looks far more similar to Call of Duty than actual warfare. The Atlantic, reporting on the book War Play by Corey Mead, states that “America’s Army was used explicitly as a recruitment tool aimed at young teenagers.” Equating a war to racking up kills in a video is a oversimplification of the reality of warfare, but is far more appealing to an audience. It seems that it isn’t violence in video games that desensitizes players – it’s specifically inaccurate violence that causes this disconnect.

Violence has become a part of everyday culture. The year of Future Man's release has been rife with alarming acts of violence, including two of America’s largest shootings ever within only 35 days of each other. With the news regularly dealing with violent acts, and games and media constantly dealing with violent themes, Grizzard suggests that the overexposure to violence isn’t what causes people to be desensitized. Instead, like Josh, it is exposure to inaccurate portrayals of violence that causes one to become desensitized. "It’s hard to glorify extreme acts of brutality when [they are] portrayed realistically. If the violence in Mortal Kombat actually looked like real violence, few people would play the game and expose themselves to it."

Presenting violence that is, as Grizzard claims, "sanitized to make it more appealing," may be more dangerous than showing realistic consequences of violence. "Graphic violence in news media can actually increase moral sensitivity by eliciting stronger emotional reactions," Grizzard says, and some video games have attempted to do exactly that. The controversial "No Russians" level of Call of Duty: Modern Warfare 2 forces players to put themselves in the shoes of their enemies and witness the reality behind war – specifically that a lot of innocent people can end up dead. The first-person shooter Spec Ops: The Line stretches this approach over an entire game, forcing the player to make horrifying choices while asking, "Do you feel like a hero yet?" and stating that "The US military does not condone the killing of unarmed combatants. But this isn't real, so why should you care?" The reality of violence may be horrifying, but exposing audiences to it may be the best way to communicate its actual consequences.

Masses of people becoming desensitized to real-life violence is an awfully depressing topic to base a show around, but Future Man mines it for comedy with surprising success. Seeing two video game warriors stomping around Earth with the same disregard for human life that someone playing Grand Theft Auto might have makes for some darkly hilarious moments. An early peek of the show's humor comes when Tiger and Wolf blow up a cop car – but not before the show takes a look inside the car to explore the lives of the nameless police officers who get attacked in the carnage. The following episode opens with the surviving officer informing his partner's family of their death, and the viewer gets a look into the comically perfect life they had.

Future Man argues that even though video game aficionados like Josh spend their free time striving to land a game-winning headshot, they're not at all equipped to handle real-life violence. It's easy to become desensitized to blocky polygon people ripping each other's arms off – but it may become harder to stomach violent games as they start looking more realistic. The show even, perhaps inadvertently, serves as a criticism for games like America's Army, which present real-life violence in an accessible way without showing the truth behind the actions. For a show that's not shy about making jokes regarding Ms. Pac-Man's possible sexual prowess, it actually has a pretty strong message about how the world interacts with fictional violence.

More like this
Stephen Graham’s Wife Plays A Vital Role In His Career
By Emma Madden and Sophie McEvoy
8 Epic Must-See Moments To Relive From The Lionesses’ Euros Win
By El Hunt
Lewis Hamilton Turned Down A Role In 'Top Gun: Maverick' For This Surprising Reason
By Darshita Goyal
Bridgerton’s Simone Ashley Stars In ODESZA's "Love Letter” Music Video
By Radhika Menon
Get Even More From Bustle — Sign Up For The Newsletter