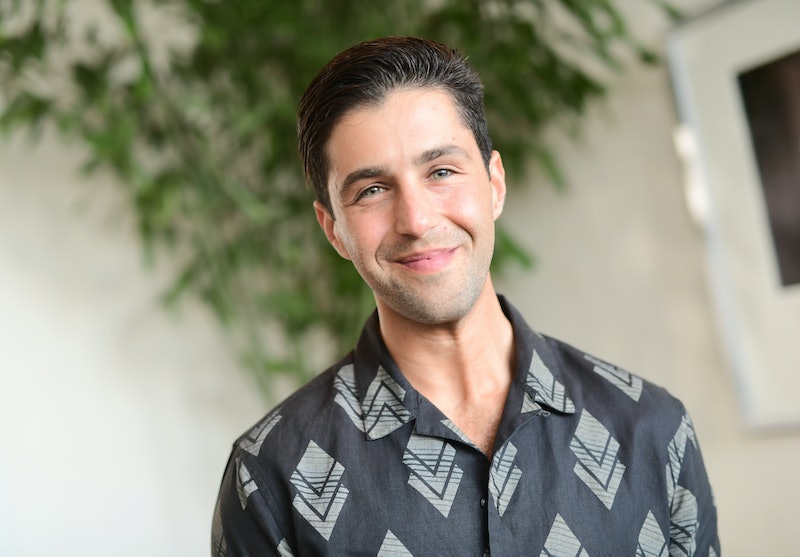 Adjusting to life as a new parent has got to be pretty tough sometimes. There's so much to do, so much to learn — the feeding, the crying, the changing of diapers. Even the act of bonding can prove difficult for some moms and dads. Just ask former Drake & Josh star, Josh Peck, whose newborn baby isn't bonding with him for one very hilarious reason, according to People.

On Jan. 1, Peck and his wife Paige O'Brien both announced the arrival of their first child in separate Instagram posts. Their captions revealed that they'd had a son and dubbed him Max Milo Peck. Cute, right?

Well, little Max Milo Peck might be cute and all, but he's apparently not a huge fan of his famous dad just yet. OK, so that's not entirely true. On Jan. 2, Peck posted a photo that depicted him sleeping with his son cradled up against his chest. "For some reason he’s not latching," he jokingly captioned the pic.

Clearly, Peck isn't the one who's breastfeeding the child. Although, no word on whether or not anyone clarified that with the star before or after he took and posted the pic, but he'll — fingers crossed — figure everything out eventually.

Peck and O'Brien dated for several years before getting engaged back in 2016. They walked down the aisle in June 2017, and suddenly everyone who had grown up watching Drake & Josh probably felt very, very old.

Their wedding also caused a big of a ruckus on social media, when Peck's former costar, Drake Bell, sent off a flurry of tweets that have since been deleted about not getting an invite to his buddy's wedding. "We've been together 18 years, Josh and me, me and Josh," Bell explained to Entertainment Tonight shortly thereafter. "We've been so close, it was just one of those things where you know, I'd been talking to him, and he's been telling me about the engagement. And then I saw on social media, the wedding, and I didn't hear about it."

The two old pals eventually cleared the air, though. Bell even made an appearance in a sweet video compilation that showed Peck telling each of his friends for the first time that O'Brien was pregnant. The whole thing is really, really cute and genuine — shock, surprise, awe, excitement, deep contemplation: They're all there in various forms from various people — but it was especially nice to see Peck share the news with his old buddy Bell.

Based on the many, many people who were so clearly thrilled by Peck and O'Brien's baby announcement, little Max Milo Peck will definitely be getting tons of love from all of his honorary aunties and uncles.

Unfortunately for Peck, O'Brien will have to take care of the "latching," but he'll undoubtedly have plenty of other things to bond with his son over. Like, say, watching reruns of Drake & Josh, creating sellable merchandise, or teaching the kid how to transition from child star to a social media superstar.