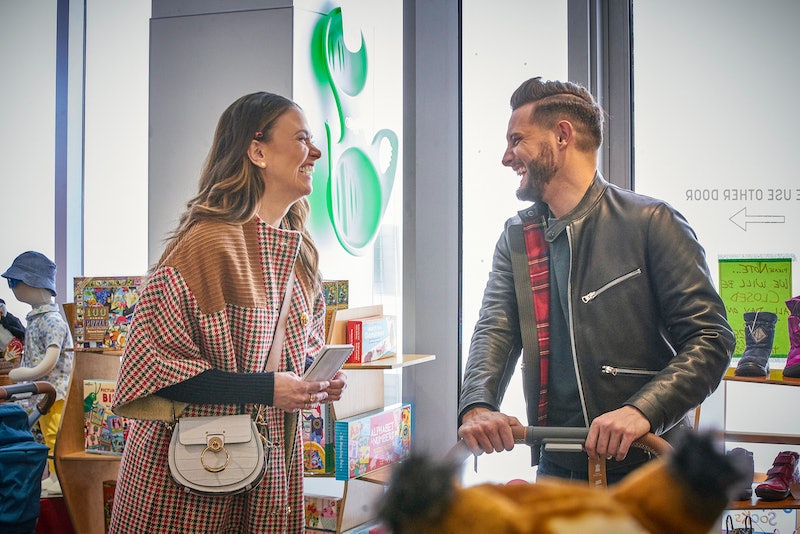 Spoilers ahead for Younger Season 6, Episode 2. If you are still feeling torn and devastated over the enduring Charles/Liza/Josh love triangle on Younger, I am right there with you. There's no villain in this situation — just a lot of "what ifs" and "could have beens" swirling around these three lovely characters. But now Josh's baby on Younger might bring him and Liza back together in unexpected ways, and the latest episode hinted that things might not be done between the two of them, regardless of her relationship with Charles.

Before Josh's baby is even born, he's leaning on Liza in a big way. She's done this whole "parenthood" thing already, after all, and is pretty much a pro. She accompanies him to the baby supplies store, edits his list to tell him the things he doesn't really need (or will need extra of), and is so eager to help him be the best dad he can be, no matter how bittersweet it might be for her to watch her ex have kids with someone else.

Later in the episode, Josh's baby is actually brought into this world, albeit a little earlier than expected. After all is said and done, Liza looks in on him cradling his new daughter, and she looks a little crestfallen. It's as if she's either slightly jealous that he's creating a family with someone else — a normal way to feel about an ex! — or she's having regrets about letting him go.

When Liza goes home to Charles, it's clear that something isn't sitting right with her, even though she's pretending to be happy. So what's going on? Is she going to try and get back together with Josh, especially now that she's probably going to be lending a hand with the baby? Has this new development shown her where her true feelings lie?

It would be pretty odd if Liza and Josh got together with this baby in the mix of things — part of the reason they weren't right for each other in the first place was their age difference, and the fact that Liza had already done the whole "raising children" thing and didn't want to do it again. Hopefully the show wouldn't have her abandon that very valid and sensible choice just for the sake of romance, especially with the career she's trying to build.

But there are obviously still feelings there, and given that plenty of people are pretty skeptical of the circumstances surrounding Josh's baby, they might have a chance to resurface even more. Some on Twitter are not buying that Josh actually got a paternity test, or if he did, that he's being honest about the results. He looked super cagey when he told Liza he was the father, and when she mentioned this week how lucky the baby was to have him as its father, a similarly disillusioned look crossed his face for a moment.

Maybe if Josh gets a taste of parenthood and isn't in love with it, *and* if it turns out that the baby isn't actually his, there might be a future with him and Liza. But as much as I loved them together, there's something to be said for the show allowing exes to be friends. If Josh loves being a dad, he could stick with that kid for life, regardless of it's his biological child. Plenty of people are great parents to children they didn't help conceive. And Liza and Charles have their own thing going on that might make more logical sense, despite its flaws.

Josh and Liza will always remain in each other's lives, and their love for each other, platonic or otherwise, is clear. But the cold, hard truth is that their romance shouldn't be forced if it's all butterflies and romance, with no stability or logic to go along with it.