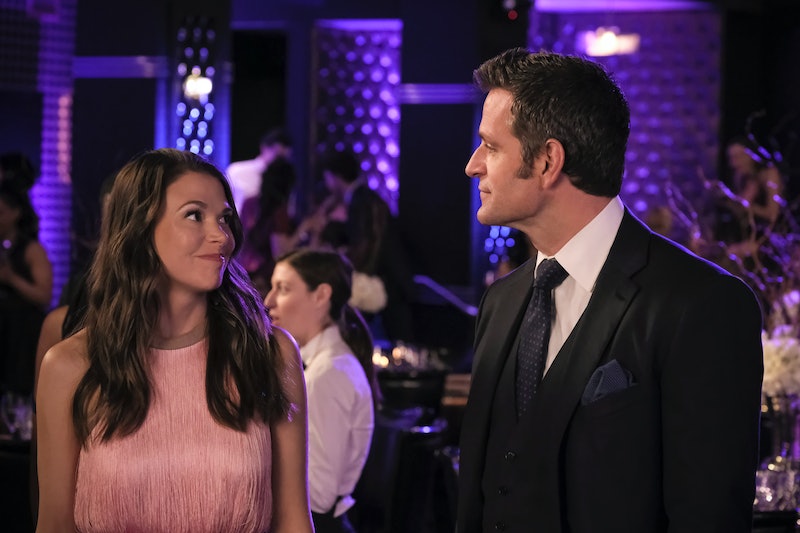 Much of the drama on Younger has always hinged on who knew Liza's true age and what others would do with that information if they found out. Even when the show was seemingly about her relationships with Josh or Charles, it was always really about how her lying about her age would affect her chances at a happily ever after with either of them. Things are different this time around, though. Heading into Season 6, Younger isn't about Liza's age anymore — and that's probably a good thing, according to the cast.

To be clear, the premise of the show will always be about Liza re-entering the workforce after a divorce and having to pretend to be a 20-something in order to do it. But the Season 5 finale saw her and Charles (Peter Hermann) finally together, almost going fully public about their relationship. Having secured a book deal in which she would "tell all" also meant that enough people knew about her fib that her entire world wouldn't come crashing down if more people found out. Most of the people who should know, do now.

There are far more interesting things going on this season than Liza playing a cat and mouse game with her friends, crushes, and boss. Sutton Foster, who plays Liza, tells Bustle that she can't wait for the moment that her secret is fully out. "I think the show can exist and go on without the lie as the premise. It’s more about the love interests, and friendships, and intergenerational relationships, and I can’t wait for when that can happen. I feel like it will be such a relief for the character." Liza also has some larger things to handle in the meantime, too, like Josh's baby and her new job working for Kelsey.

Hillary Duff, who plays Kelsey, agrees with Foster that Liza's lie is more on the periphery of the plot this season. "It’s such a smaller part of the show now anyway, with the other storylines taking over and becoming bigger. Like the love triangle between Liza, Josh, and Charles, or Josh’s baby," she says.

Duff also notes that Kelsey and Liza's careers are more of a focus this season, which is a welcome change. They're no longer struggling to get their publishing imprint, Millennial, off of the ground. The two women are running the show. "Liza and Kelsey are sitting at the top of the top now, but everything is crumbing and there’s so much pressure at work. A lot of this season is focused on the workplace and less on the age stuff," she adds.

That doesn't mean that everyone on the show won't still keep working hard to protect Liza, though. Molly Bernard, who plays Lauren, says these characters will stick together no matter what — even if Liza ends up being dragged into publishing world gossip rags because of her newly solidified relationship with her boss. "I know the question that’s always going on in the writers room is, ‘Is she a liar, or is she lying?’ And I think they’re very different things, and Liza is so charming, and we love her and we want to be rooting for her even though she’s doing crazy sh*t." Nico Tortorella, who plays Josh and uses they/them pronouns, agrees — even though Liza's scam has hurt her and Josh's relationship. "She’s not a bad person, she got stuck in a bad situation," they say.

And now with most of her inner circle in the loop, there's more space for Liza to get into other kinds of bad situations and work them out with her friends on the show. It's about time, too.