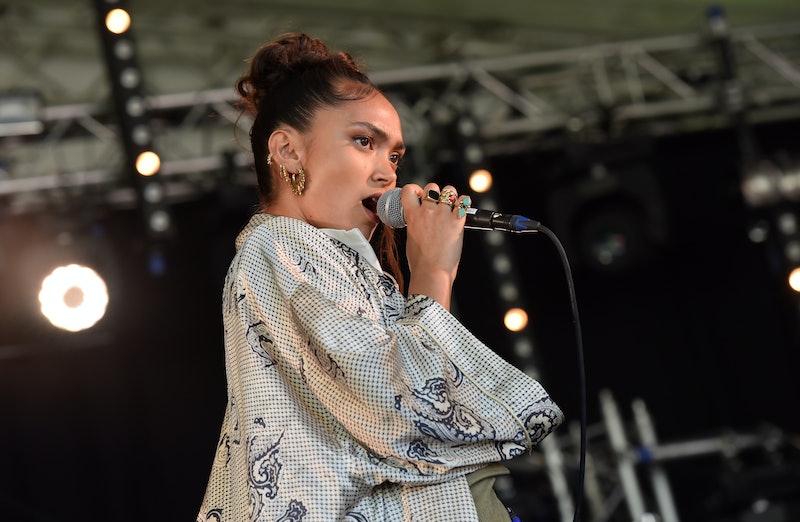 The BRIT awards are an annual celebration of all that’s good in the British music industry. This year the ceremony will be on Feb. 18 and various nominees have already been announced. However, the shortlist has come under scrutiny for its lack of gender representation, and Rising Star nominee Joy Crookes has now spoken out about why she thinks it’s unacceptable that so few women have featured among the 2020 nominations.

Crookes was nominated for the 2020 Rising Star Award alongside Celeste and Beabadoobee. Despite losing out to Celeste, Crookes still had an important message to share about this year's BRITs.

Following the announcement of the 2020 nomination list, Crookes took to Twitter. In response to the Mastercard Album of the Year list, which was exclusively male, she wrote: "Grey Area by Little Simz was one of the best albums to come out of last year. What a fucking talented woman. Oh wait, are women not allowed to be in this category?"

After that, Crookes explained to BBC Newsbeat, a few members of the BRITs voting panel messaged her privately. "They were saying there are people there to make sure diversity is looked at and people of all backgrounds and genders are included in the nominations," she told Newsbeat. "It just didn't answer my question, though. My question was, where are the women in the best album category?"

Mabel is the most accomplished female artist at this years BRITs ceremony with three nominations, including Best Female Solo Artist and Song of the Year. However, along with the Mastercard Album of the Year, the Best Group category also excludes any female artists.

Crookes told Newsbeat, “I don't know all the answers but something needs to be done. It's important for other artists to say something. I know it's sticky subject and people might just think 'oh be quiet Joy' but I'm not here to offend anyone.” She continued:

“I'm also not here take anything away from the women that have been nominated. Those women have worked so hard, but it is as simple as there aren't enough women nominated in the BRITs. You can give me the whole story... you can tick all the boxes, but [diversity] just isn't there yet."

Crookes isn’t the only person who has seen the gender imbalance in the nominations list. NME editor Charlotte Gunn said to the BBC: "How do they look at that list and go, 'Yeah, that's cool, let's go with that'? I find it really strange." Similarly Rhian Jones, a contributing editor to Music Business Worldwide said, “The BRITS need to have a look at their eligibility criteria, because [success] isn't necessarily about record sales any more.”

According to the BBC, the BRITs explained that the list of artists who qualify for their awards was "compiled by the Official Charts Company" and "includes artists who have released product and enjoyed top 40 chart success".

Jack Whitehall will be hosting the awards show for the third year in a row. Joining Celeste to perform on the night will be Lewis Capaldi, Harry Styles, Billie Eilish, Mabel, and Stormzy.