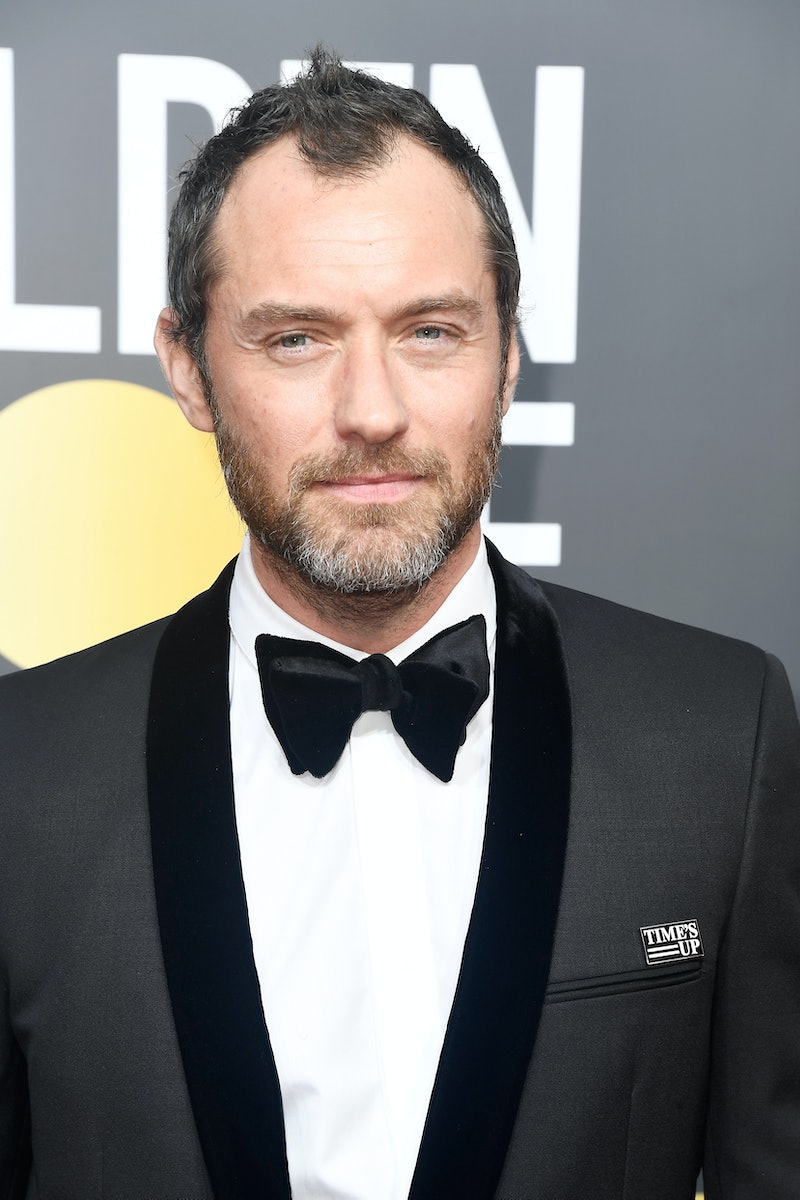 We know he's a major character, but we've yet to learn his name. Who is Jude Law playing in Captain Marvel? Without giving away his moniker, Entertainment Weekly revealed that Law's character in Captain Marvel is a "key piece" in the Marvel Cinematic Universe's first female-led blockbuster starring Brie Larson. Luckily, Law gave a little bit of insight on what to expect from his mysterious character and his dynamic with Captain Marvel before the film debuts in March.

As explained by EW, the movie begins when Carol Danvers (Larson) is living on planet Hala as part of Starforce, a specialized military team described as the SEAL Team Six of space. Law's character is the leader of the group, made up of Kree people (an advanced alien race introduced in Guardians). Law's character, who is a devoted Kree, is a mentor-like figure to Carol, a human pilot with Kree DNA.

The Kree race values the community over the individual, and while at war with their enemy the Skrulls, Law's character is perhaps the most devoted Kree there is. The actor explained to EW, “He is driven by a belief in the divine leadership of the Kree people. He’s almost a devout warrior — unquestioning, conservative, but inspirational.”

Further, Law's character has a special relationship with Carol, his mentee, and it seems they'll have an interesting dynamic that will play out on screen.

“These extraordinary powers she has, he sees them as something of a blessing and something that she has to learn how to control,” Law explained. “That’s a motif throughout the piece, the element of learning to control one’s emotions and to use your powers wisely.”

But their bond could ultimately cause friction within the rest of the group. Brie Larson teased, "There’s a lot and back and forth that comes with the two of them, which kind of creates a little bit of tension with the rest of Starforce. Like, ‘Why do they have a special relationship, and why isn’t it me?'"

This new information, however, leaves fans with more questions than answers and might debunk theories that Law is playing Kree warrior Mar-Vell, as previously speculated. In the comics, Mar-Vell was a Kree alien who trained Captain Marvel, and inadvertently gave her superhuman powers. When Law was originally cast, it was reported that he would be playing Mar-Vell, but now that's not so clear. As pointed out by Screen Rant, neither Law nor Marvel have directly addressed the rumors. Now, theories suggest Law's playing secret villain Yon-Rogg. As reported by CBR.com, Yon-Rogg is Mar-Vell's greatest nemesis and commander of the Kree expedition that brought the aliens to Earth. Until more information is revealed, his role remains a mystery.

A look into the Kree society will present familiar faces to fans: Guardians' Korath (Djimon Hounsou) and Ronan (Lee Pace) are both returning to the MCU, but this time they're not the villains they were in Guardians of the Galaxy. The events of Captain Marvel take place long before these characters have become denounced terrorists.

It's unclear whether or not the film will tease the beginnings of Korath and Ronan's journeys to villain-hood. Though, if Law does, in fact, end up playing Yon-Rogg, that might just be all the villain fans can handle.

More like this
Why Did Meatball Leave 'The Bachelorette'? His Second Chance Didn’t Last Too Long
By Grace Wehniainen
Memes & Tweets About Logan Switching From Rachel To Gabby On 'The Bachelorette'
By Grace Wehniainen
The 'PLL: Original Sin' Creators Say A’s Identity Will Be “Very Clear” By The Season Finale
By Alyssa Lapid
'The Sandman’s Ending Is A Departure From Neil Gaiman’s Comic Book Series
By Kadin Burnett
Get Even More From Bustle — Sign Up For The Newsletter