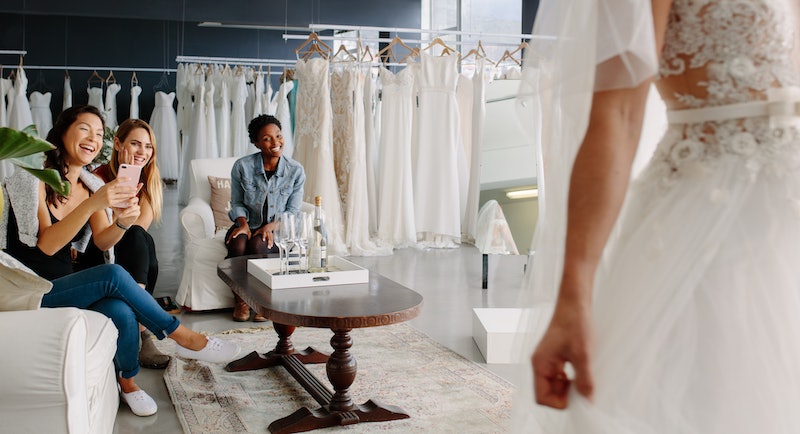 When I got engaged, I thought I was fairly prepared for what came next. I was ready for the well wishes and the excited congratulations. I was thrilled to plan the wedding. What I wasn't prepared for? The questions. Suddenly, everyone from distant relatives to total strangers wanted to know how the proposal went down (it happened at home), who took the photos of the big moment (uh, a GoPro), and how my fiancé chose the ring (actually, I designed it). And as much as I wasn't ready for the constant onslaught of questions, what I was even less prepared for was the judgment that often came after my answers. From the ring, to the proposal, to the dress, people seemed to come out of the woodwork to comment on it all — and every single one of them came into the conversation with an opinion, whether I asked them join the conversation or not (I usually didn't). In a world dominated by well-intentioned (and often necessary) political correctness, all bets are off when it comes to weddings. People just can't help themselves.

My first taste of wedding judgment came directly after the proposal. In retrospect, it gave me a good sense of what I was in for over the course of the engagement. At the time, though, I just found it annoying. I remember telling one stranger over a business lunch that I wasn't totally shocked about the proposal as Jake — my fiancé — and I had discussed getting engaged for years. I was met with a look of total, complete, utter confusion. "But... didn't that ruin it?" the woman asked. "Didn't you want to be totally shocked? For it to be a huge thing?" Even when I told her no, that actually the last thing I wanted was a massive production with a flash mob or scavenger hunt, her brain seemed unable to process it. And this is the recurring theme for weddings: When you meet people who have gone through it, 90% of them are programmed to believe that their way is the only way to do it.

But weddings are kind of like people in that way — every one is a little different, some are kind of strange, and you're not entitled to an opinion on any of them, even if you think you know better.

I'm sure some of this mindset has to do with the fact that most people's weddings these days are expensive. The idea of spending tens of thousands of dollars (or more) and then having someone else do things a totally different way can make people feel insecure about their own choices. It's easy to start to think that maybe you spent those tens of thousands of dollars the wrong way, and to respond to that insecurity by telling someone else that they should do things in a way that more aligned with how you did them. But weddings are kind of like people in that sense — every one is a little different, some are kind of strange, and you're not entitled to an opinion on any of them, even if you think you know better.

Most people who have ever been engaged know this, but if you want to see the judgment in action yourself, all you have to do is talk to group of people who have planned weddings themselves. Ask people if they prefer a band or a DJ and quietly observe as someone's eyes bulge out of their head as another person explains how "a band just has, like, a different energy, ya know?" Try to discuss the pros and cons of a "first look" and notice as people slowly pick up pitchforks. Simply even mention the idea of a cash bar and people will look at you like you just decided to include a "human sacrifice" section to the program for the evening.

If you're on the internet these days, then you already know that people have an opinion about everything. This is a universal fact upon which the world works. But most people know that during the biggest moments of life, it's probably a good idea to just shut up and keep your thoughts to yourself. This fact does not, however, apply to weddings. But when you think about the history of weddings, this kind of makes sense. Traditionally, a wedding is about families — about bringing two people together, but also bringing together their families. According to a 2017 study by WeddingWire, parents of the couple getting married generally contribute about $19,000 on average. And given that, according to The Knot, the average cost of a wedding in the United States is little more than $35,000, this means that families are contributing a lot. When you have close to $20,000 invested in something, it makes sense that people have an opinion.

Another reason why everyone seems to care so much about other people's weddings? They're frequently billed as the best and absolute most important day of a woman's life. The history of this can go as far back as ancient Greece, when weddings quite literally symbolized a man taking over ownership of a woman from her family (gross, I know). For centuries, women had virtually no rights in comparison to men and therefore marriage was one of the only major moments in a woman's life that was publicly celebrated. It's no wonder that the idea of a wedding day being the biggest day in a women's life has stayed so closely embedded in our society. But despite the fact that this notion still pervades, weddings have significantly evolved since then. They are no longer just about a man marrying a woman — they are as varied as the cultures, religions, gender identities, and sexualities that participate in them. And for a lot of people who identify as women and are marrying men, this day isn't the most important in their lives, nor is it defined by its sexist routes.

While modern weddings are still certainly about families, there is more emphasis than ever today put on the individual couple. Many couples pay entirely for their own wedding. Many couples choose to elope. Many have left behind the traditions that made weddings a community event — one where every close friend and family member you have was woven into the experience to the point where it was impossible to have the event without them. These days, and perhaps rightfully so, weddings are much more about the two people getting married than the people in the audience. But the opinions of the people in the audience? They've stuck around.

"This weird sense of entitlement comes over people when it comes to weddings. Things people would never do or say under any other circumstances, suddenly become par for the course in the context of a wedding," Leah Weinberg, owner and creative director of Color Pop Events, a New York City-based event planning company, tells Bustle. "If you hosted a dinner party at your home, would anyone dare tell you to your face that they thought the food was subpar? Of course not! But when it comes to a wedding, people are going to let the criticism fly freely."

Another aspect of modern weddings that adds to all the judgment? Social media.

"We are so encouraged to over-perform in every area because that's what 'being a good woman' is — this plays out in very detrimental ways in the wedding industry," Egan says. "I think we've decided as a culture to put this event on such a pedestal, especially for [people who identify as] women. When you decide to paint it as 'the best day of your life' — you can expect people are going to have opinions and of course, that as a bride, you're going to take it personally — it's hard not to!"

While weddings may indeed be less and less about the extended family unit, Egan is right — they're also more and more about the spectacle of it all. Even if the day is supposed to be more focused on the couple themselves, it can be easy to lose sight of that amid all the pressure.

But Egan also says that this is exactly why focusing on your partnership during the wedding process and not just your wedding may be the best way to get through the process, suggesting that couples "actively nurture the foundation of their relationship so they're united enough to weather the storms. If you can't weather the wedding planning storms, you won't last in the marriage high seas."

As for everyone else's opinion? Weinberg suggests just letting it go. "My general rule of thumb is to try to ignore whatever two cents anyone tries to give about your wedding. If that doesn't work for you, then listen to what the person is saying, objectively determine whether there is any merit to what is being said, and then determine the best way to address or not address their feedback," Weinberg says.

I'm almost a year into my engagement, and I can say I agree with Weinberg. While I wasn't prepared for the judgment, I've gotten used to it — or, at least, learned to ignore it. My advice now to people getting married? Before you ever tell anyone you're engaged (if you can wait), sit down with your partner and write down the the three to five things that are most important for you to feel on your wedding day. Not how you want to look or what food you want to eat, but how you want to feel. And if "like I've pleased everyone" is on that list? Well, I suggest you cross it right off.

More like this
Are Sagittarius & Sagittarius A Good Match? Astrologers Weigh In
By Kristine Fellizar
15 Ways To Deal With A Toxic Family During The Holidays
By Gabrielle Moss and Carolyn Steber
Are Sagittarius & Aquarius Compatible In A Relationship? Astrologers Weigh In
By Kristine Fellizar
Emily Ratajkowski & Pete Davidson's Astrological Compatibility, Revealed
By Nina Kahn
Get Even More From Bustle — Sign Up For The Newsletter