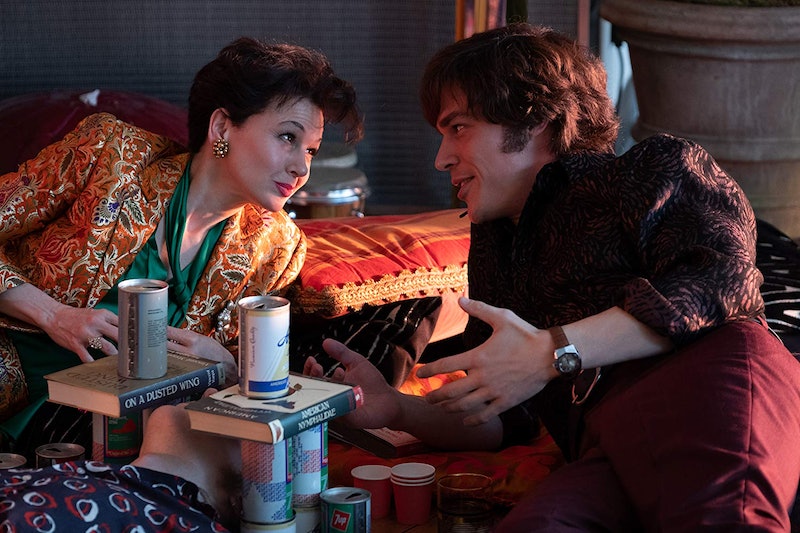 Hollywood legend Judy Garland wasn't only married to her career — she also wed five men in her lifetime. The man she was married to at the time of her death was manager and musician Mickey Deans, who appears, as played by Finn Wittrock, in the Sept. 27 release Judy. Though the film gives moviegoers a fictionalized taste of how things were between them during the last two years of the performer's life, there's a lot more to Judy Garland and Mickey Deans's real relationship.

Deans, who was 12 years younger than Garland, wrote a book about about his late wife in 1972, three years after she died. In Weep No More, My Lady: The Best Selling Story of Judy Garland, Deans claimed that the two met in 1966 while Garland was still legally married to actor Mark Herron. (They divorced in 1967.) They were together for a fairly inconsistent three years before they married on Mar. 15, 1969. Garland was only 47 when she died that June of an accidental overdose.

Garland's daughter Lorna Luft also wrote about her mother in her 1998 autobiography, Me and My Shadows: A Family Memoir. Loft claimed that Deans and Garland first met while he was delivering prescription drugs to their door. Deans book told the same anecdote, but offered different timing.

In Luft's story, Deans came into their lives in 1967, after her mother divorced Herron. "One night when we were in New York she ran out of Ritalin, and I ended up calling her friend John Carlysle in California in the middle of the night to see if he could find us some," recalled Luft, who was 14 years old at the time. Her mother had grown reliant on the prescription stimulant to keep her alert and awake for late shows.

According to Luft, Carlysle then called his friend Charlie Cochran to help find the drug. "Charlie called around and eventually showed up in the wee hours of the morning with a couple of Ritalin for my mom and a man he introduced as 'Dr. Deans.'" she wrote. "What I didn't know was that 'Dr. Deans' was disco manager Mickey Deans, who two years later would become my mother's last husband."

According to The Guardian's review of the memoir, Luft first thought that "Dr. Deans" would be watching over her mother, who had substance use disorder. Her assumption was incorrect, to her recollection. Per Collider, Luft described Deans as a "dreadful man" in her book. "I mean if she put an advert in a newspaper for the most unsuitable person to take care of her, she wouldn’t have had a better response," she wrote. "I don’t know what possessed… well, I know what possessed her because he gave in to her and fed her all the things she wanted."

Still, Garland seemed to have been devoted to Deans. Tony Palmer noted a sweet onstage interaction in his Observer review of one of her shows at Talk of the Town in London — the residency that forms the basis of the film. "Her husband-to-be is dragged on and kissed while she sings, 'For once in my life I have someone who needs me,'" Palmer wrote. When they got married, Garland declared to reporters, "Finally, finally, I am loved," per Time.

According to People, Deans didn't remarry after Garland died but instead moved to Cleveland, Ohio and dedicated his life to "historic renovations and producing police fundraising events." ClevelandHistorical.org notes that in 1985 Deans bought and restored Franklin Castle but sold the property in 1999. Deans, whose real name was Michael DeVinko, died in 2003.

Judy features yet another account of Deans and Garland's brief marriage. But ultimately, only the star and her fifth husband knew what their relationship was truly like behind closed doors.