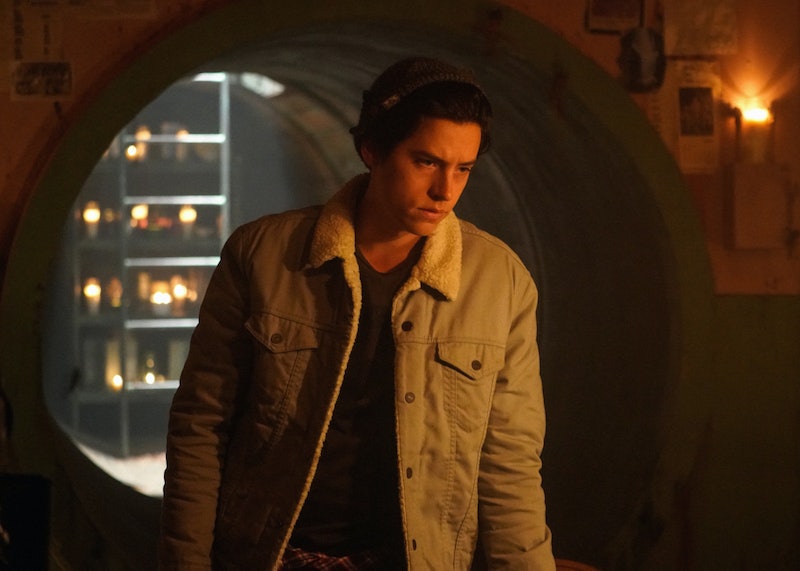 The third season of Riverdale ended on a huge cliffhanger when a flash forward sequence saw three out of the four core characters standing in front of a fire out in the middle of the woods. They are covered in blood and decide to burn their clothes — including Jughead's iconic beanie, whose owner is nowhere to be found. Many fans have understandably been concerned about Jughead's fate on Riverdale, but according to the cast, who recently spoke with TVLine at this year's San Diego Comic-Con, the way that the scene ended up happening was not how it was originally supposed to go. And why it ultimately played out differently is for a pretty amusing reason.

“The only reason why that happened was because Cole [Sprouse] was cold that night,” KJ Apa revealed to the outlet, in regards to why Jughead was MIA in the flash forward scene. And while his comment could be interpreted as a joke, meant to mess with fans, Lili Reinhart backed up Apa's remark, insisting that it's the truth. “It literally was scripted with all four of us, and he was like, ‘I don’t want to do it,'" she stated. So does that mean that Jughead is completely safe from harm? Well, not necessarily.

Despite Apa and Reinhart's assurances that Sprouse was initially supposed to be in the scene — which would indicate that his character is still alive and well — other comments about Season 4 hint that our favorite broody journalist isn't out of the woods (perhaps both literally and figuratively) just yet. “The mystery of what happened to Jughead [will be big]," showrunner Roberto Aguirre-Sacasa teased at Comic-Con, as per TV Insider. "In the episodes leading up to it, we’re going to flash-forward to events that will [help put] the pieces together.”

Prior to that big reveal, though, there will be a lot of adjustments for Jughead to contend with, regardless of what his fate ends up being. One particularly intriguing storyline will be seeing Jughead attending a new school far away from his friends and longtime girlfriend Betty. "Jughead goes to prep school in this season," Sprouse explained to Entertainment Tonight during a recent interview. "He's only back in Riverdale on the weekends."

This means that Jughead and Betty will have to try and make their relationship work long-distance — something that the actor feels could cause significant stress for both of their characters. "I think that is going to inevitably put stress on the relationship between Betty and Jughead," Sprouse added to ET. "I think it might be a little bit tense." However, fear not, Bughead fans, because Sprouse has every confidence that these two lovebirds will be able to weather any storm that comes their way: "They might fall, turn away from each other, only to come back together way stronger. I think they're gonna be really good."

That's at least one bit of good news to look forward to in the coming season. Let's just hope that Jughead's future on the series turns out to be just as bright.

More like this
A New 'And Just Like That' Table Read Pic Confirms A Key Character's Return
By Jack Irvin and Grace Wehniainen
'RHOSLC' Star Jen Shah Refuses To Do A Post-Sentencing Interview With Andy Cohen
By Brad Witter and Jake Viswanath
'GoT' Star Emilia Clarke Says She "Just Can't" Watch 'House Of The Dragon'
By Brad Witter
This Dark 'Happy Valley' Theory Is Staring You Right In The Face
By Sophie McEvoy
Get Even More From Bustle — Sign Up For The Newsletter
From hair trends to relationship advice, our daily newsletter has everything you need to sound like a person who’s on TikTok, even if you aren’t.