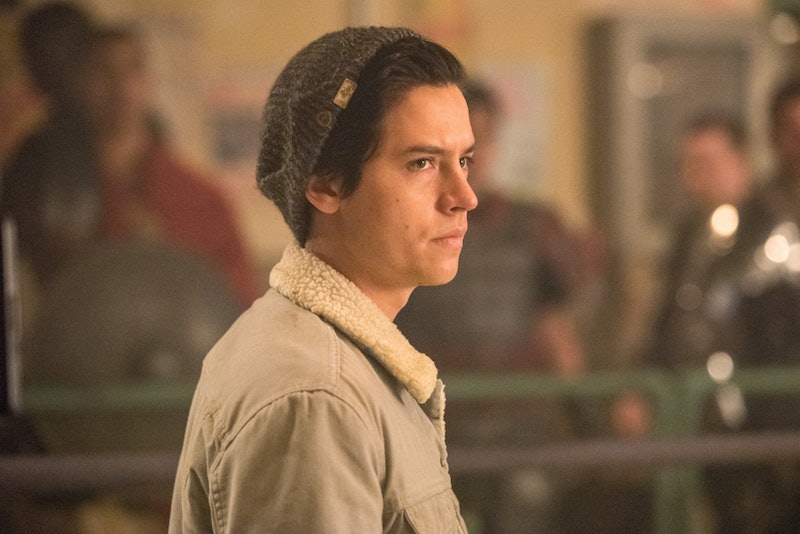 Spoilers ahead for the Riverdale Season 3 finale. The Riverdale teens' plan to have a normal year of school has been foiled again, seemingly by murder (again). At the end of Wednesday's Season 3 finale, Archie, Jughead, Veronica, and Betty had milkshakes at Pop's and vowed to have a regular senior year. However, the show then cut to Archie, Veronica, and Betty drenched in blood during spring break, and Jughead nowhere to be found. "We have to burn all of our clothes, including Jughead's beanie," Betty said ominously. Um, what happens to Jughead? Do they kill him?

Whatever went down in the woods seemed to really mess with Archie and Veronica. Archie was staring sadly at Jughead's beanie and had to be shaken back into reality by Betty, who then practically forced him to throw the hat in the fire. Veronica just looked stunned and blank. Betty did all the talking. She clearly and (somewhat detachedly?) explained:

"We'll wash off the blood in the swimming hole. After tonight, we never speak of this — ever. Not to each other, not to our parents, no one. We finish our senior year, we graduate, and we'll go our separate ways. That is the only way that we won't get caught."

The show is sort of making it seem like the three of them murdered Jughead, but surely that's not what actually happened, right? These are his best friends, after all.

Other scenarios that are easier to believe are that Jughead was murdered and the remaining trio is being framed, or that they staged Jughead's death so he could skip town for some reason, or pretty much anything other than them killing Jughead in cold blood. Also, Betty was so monotone about the whole thing. Wouldn't she be way, way more upset if Jughead had just died? There has to be another explanation for his absence. Of course, even if Jughead is safe and sound, the other three are clearly in trouble and covering something up. What could they have gotten into this time?

One thought is that Archie's vow at Pop's is foreshadowing for the spring break incident. He said, "Let's vow to be done with death cults and murder mysteries and gremlins." Jughead quickly corrected Archie that it was gargoyles, not gremlins, that they dealt with. But what if, in the future, it is gremlins? Or maybe another death cult shows up in Riverdale. Archie may have just jinxed them.

If you're thinking that Jughead can't possibly be killed off because he's a main character, don't be too sure. Cole Sprouse, who plays Jughead, told Bustle in an interview ahead of Riverdale Season 1 that he was prepared to leave the acting business again (like he did after his Disney show, The Suite Life of Zack and Cody) if he felt he needed to. "The second acting becomes unfulfilling to me, I can leave, and that's something that helps me stay sane," he said. "I'm not thinking about acting as this sort of long-term journey. If it makes sense and feels right to me, I'll stay in it or I’ll explore it, but the second it becomes unfulfilling or unenjoyable, I'm just leaving it."

Sprouse hasn't indicated that he's unfulfilled in any way by Riverdale, and that interview is from years ago, but that does mean his character isn't necessarily untouchable. Still, it's extremely unlikely that whatever happened was Jughead's actual death, and even less likely that his death was caused by his own friends.

It's not clear yet why Jughead isn't in the Riverdale flash-forward, but expect Season 4 to take its sweet time answering that question. Despite what Archie said, there are always murder mysteries, death cults, and gremlins in this show.