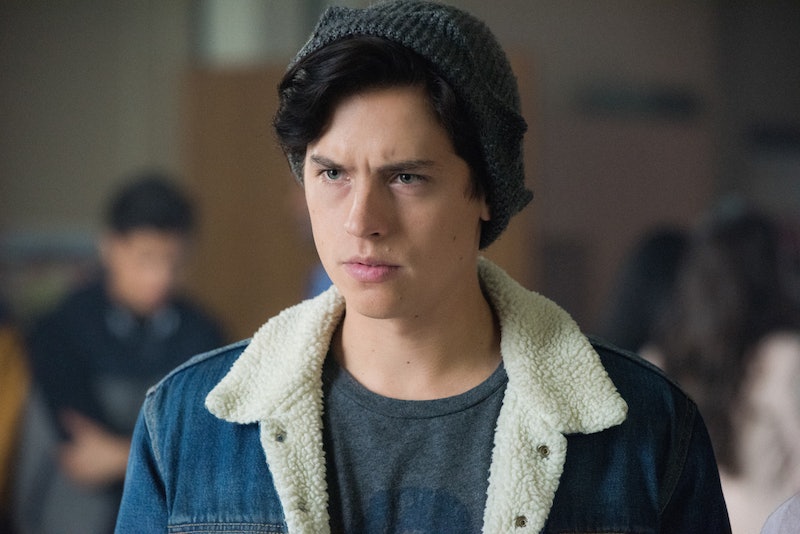 Spoilers ahead for Riverdale Season 4, Episode 15. Well, we finally have our answer: just as almost everyone suspected, Jughead is, in fact, not dead on Riverdale. Things were touch and go for a moment, especially when Betty kept shutting down people around town who believed that Jughead was still alive. But then our beloved, beanie-clad narrator popped up and put an end to this drawn-out mystery.

Jughead was hit by a rock in the woods at the Stonewall Prep party, but not by Betty, and it also didn't kill him. As Betty explained, his beanie cushioned the blow just enough to help him survive (sure, seems scientifically plausible). Realizing that Bret and Donna did intend to kill him, Jughead and Betty faked his death. He then hid out in the bunker while the news spread, giving him and the rest of the gang time to figure out how to pin the blame on Donna. They knew she and Bret would be scrambling after their plan to frame Betty went wrong, and that maybe Donna would make a mistake along the way.

A ton of people were in on the cover-up, including Charles, FP Jones, Jughead's sister Jellybean, the coroner Dr. Curdle Jr., and Archie's mom. Betty didn't mention her mother being on that list, but she was presumably also in on it, since Betty freely talked about the cover-up during one of Alice's documentary segments. (Yeah, she's making Jughead's faked death into a true crime show.)

When Jughead was finally shown to be alive, fans were ecstatic: even knowing he wasn't truly dead, having confirmation after nearly a year of speculation and theorizing was a relief.

And with that mystery cleared up, it's time for the next one: what is Donna hiding, and how will Betty and co. prove she was the one behind Jughead's attempted murder? At the end of the March 5 episode, Veronica had her sister Hermosa dug up dirt on Donna and discovered something groundbreaking. "Everybody, brace yourselves, because Donna Sweett is actually—" Veronica said, showing a document to the others but not to the audience. "If this is true, this is our smoking gun," Jughead said. "This is the final piece of the puzzle that we needed. I think I know how to take down these Stonies once and for all."

Next week's episode should hopefully shed more light on what it is Veronica found, but regardless, Jughead seems to know what to do with the information. Now, he's dead set on revenge.

More like this
Netflix Shut Down 'Bridgerton' S3 Rumours About A “Very Dark” Storyline
By Bustle
'The Queen’s Gambit' Season 2 Tweet Wasn’t From Anya Taylor-Joy
By Mary Kate McGrath, Jack Irvin and Grace Wehniainen
6 'Happy Valley' Easter Eggs You May Have Missed
By Sophie McEvoy
'The Last Of Us' Has Officially Been Renewed For Season 2
By Darshita Goyal
Get Even More From Bustle — Sign Up For The Newsletter
From hair trends to relationship advice, our daily newsletter has everything you need to sound like a person who’s on TikTok, even if you aren’t.