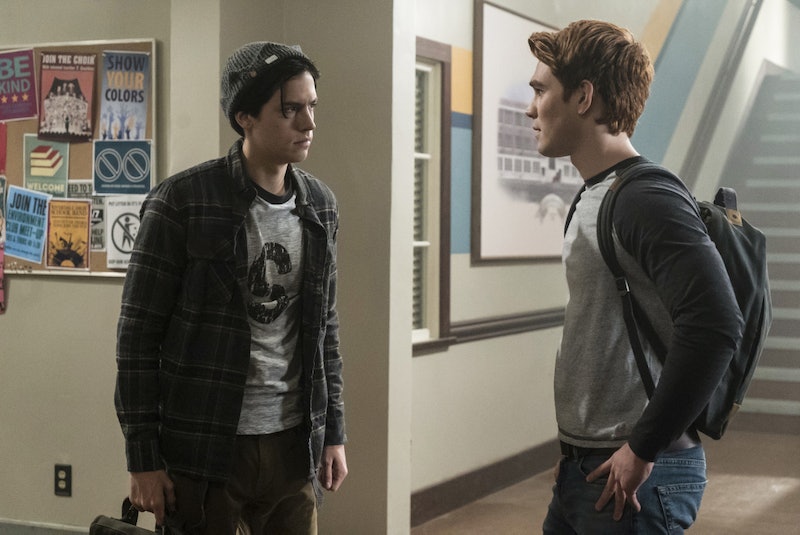 If Jughead Jones is your fave on Riverdale, I'm not surprised. He's sweet, committed, and just as mysterious as everyone else in the sleepy town. In fact, if the comics are any guide, Jughead isn't even his real name on Riverdale, though that story may not be a major clue.

In Archie comics, Jughead's full name is Forsythe Pendleton Jones III and his sister Jellybean's given name is Forsythia. Don't you feel silly now for thinking that the Jones kids had "Jughead" and "Jellybean" on their birth certificates? Their real names are much more conventional. Pretty fancy, actually, for their working class lifestyle. Jug's nickname was originally inspired by his big ears in the comics. While I wouldn't put it past Cole Sprouse's character to take bullying in stride like that, the CW series hasn't explained the name's origin yet.

However, it is likely that Jughead's real name is Forsythe as well on Riverdale, as Jughead's father is called "FP" Jones on the show. I can only imagine that that stands for Forsythe Pendleton. You can't be a "III" without a dad who's a "II" or "Jr." — so Jughead's given name will likely be addressed at some point. Perhaps, in the CW series, Jughead chose this nickname as a way to disassociate himself with his father. Their relationship is strained, at best. I don't think they'd want to go around making their matching name situation known.

That said, are we ever going to meet Jellybean "J.B." Jones on Riverdale? This Pink Floyd-loving fifth grader sounds way fun. It also seems like she might have a better relationship with Papa Jones, if she wants to emulate his initials. Their mother, Gladys, hasn't been seen on the show either. Riverdale has spent a lot of time with the mythology of the Andrews, Cooper, and Blossum families, but I'd like to do a little more keeping up with the Joneses.