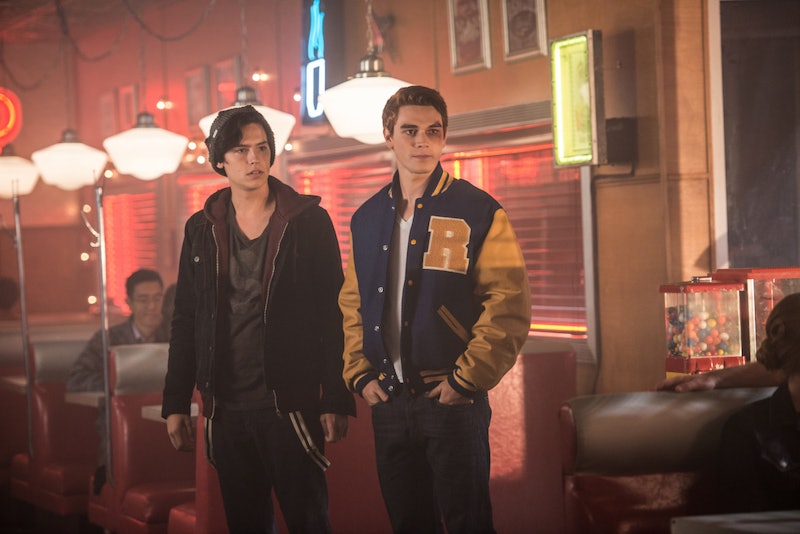 The CW's Riverdale premieres on Thursday night and the dark, mysterious teen drama is based on what you may consider as a surprising source: the Archie comics. Yep, that colorful, long-running comic series is the source material for the show, so you might be wondering exactly how Riverdale connects to the Archie comics. According to Deadline, the Riverdale pilot episode was written by Roberto Aguirre-Sacasa, who is a screenwriter and also the chief creative officer of Archie Comics (the company). So it sounds like the TV show will have direct influence from Archie you've known and loved, along with having the total Twin Peaks vibe that the Riverdale trailer had all over it.

But that's no accident. Aguirre-Sacasa is actually the author of the best-selling Archie comic horror series Afterlife With Archie, which follows the title character during a zombie apocalypse, according to the series' official website. The modern Archie comics have also featured extraterrestrial serial killers, flying sharks, and time travel, according to Vulture. "People say, 'I hear you're doing dark Archie,'" Aguirre-Sacasa told Vulture regarding the TV series. "We're not doing dark Archie. We're doing an Archie that mixes dark and light." And you'll see a mix of both in the series' debut episode, which features the famous Archie, Betty, and Veronica love triangle, as well as dark secrets, high school hijinks, and a murder mystery.

Here are some of the ways Riverdale connects to Archie — and they might even surprise you.

The gang is seriously all here with the same names you've always known: Archie Andrews, Betty Cooper, Veronica Lodge, and even Jughead Jones, according to the original comics. The teachers' names also come from the original, including Geraldine Grundy.

The title of the series comes from the name of the town in which it is set — and it's also the same name as the town Archie comics have been set in.

In addition to the aforementioned love triangle, other Archie relationships have carried over into Riverdale. For instance, Cheryl Blossom has a certain disdain for both Betty and Veronica, just like in the comic series, according to her official description in the comics.

At least in the first episode, Pop's Chock'Lit Shoppe is a popular spot for the Riverdale teens, just like Pop Tate's was a hot spot in Archie. And all of the teen character attend the local high school Riverdale High School, just like the comics.

Although Riverdale may be darker in tone than the original comics, the TV show still has its characters sport similar high school fashion as in the Archie Comics. Archie wears his letterman's jacket, Betty puts on a cheerleader uniform at one point, and Veronica dresses like the 2017 Blair Waldorf.

The Rest Of Archie Universe

In addition to the Archie gang, Riverdale is also populated with one of the comics' famous spinoff characters: Josie of Josie and the Pussycats. And yep, the band and their cat ears are all together at Riverdale High. But there hasn't been any sign of Sabrina the Teenage Witch, another popular spinoff character — yet.

It sounds like a whole new world for Archie and his friends in Riverdale — but with a lot of familiar faces and places from the comics.