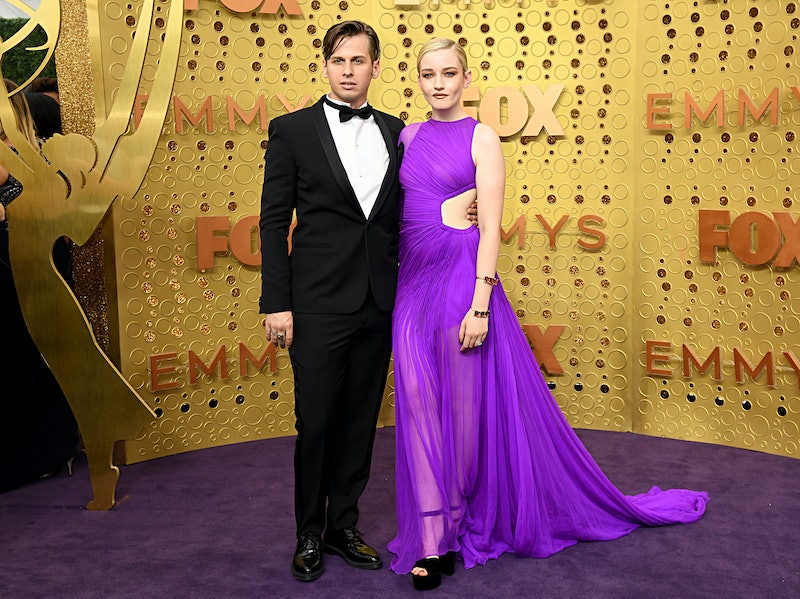 Julia Garner, 25, surprised audiences everywhere when she became the dark horse winner of 2019's Best Supporting Actress Emmy for her performance in Ozark. And a few months later she surprised fans once again. This time by marrying her boyfriend, Foster The People frontman Mark Foster, at New York City's City Hall. But despite being newlyweds, the couple both have an immense amount of work coming out soon. Foster, 35, explained to fans that the band will roll out singles throughout the year in lieu of a full 4th studio album. And Garner stars in The Assistant, coming out on Jan. 31. The film is a disturbing take on the Me Too movement from the point of view of an assistant at the bottom of the ladder who recognizes an entire system geared towards enabling those in power. Ahead of their new projects, here's everything you need to know about Garner's husband Mark Foster.

Fans of the actor and musician were caught off guard by the couple's seemingly out of nowhere engagement and marriage. So far the couple has kept the early stages of their relationship to themselves — not mentioning when or how they met in interviews or elsewhere — a seemingly conscious decision given their coordinated reveals of every other step of their now joined life.

Known for their 2011 hit "Pumped Up Kicks," Foster The People formed in 2009 and have released three studio albums since. Meanwhile, Garner's been modeling and acting for some time now, appearing in campaigns for Kate Spade and Miu Miu, and appearing in films like Martha Marcy May Marlene and TV series such as Maniac and The Americans.

The first hint they were dating came from former MTV VJ and host Matt Pinfield. In October 2018 he posted that he had a great afternoon with friends Foster and Garner.

Any guesses people may have had that the two were an item were soon solidified, as on December 30, 2018, they each posted Instagrams riding a scooter together in Costa Rica. Garner tagged Foster's account on her video after writing "My ride or die" bracketed by black hearts, while Foster wrote "me and my arrow" accompanied by a pic of both looking into his camera.

The couple were then photographed together at Netflix's SAG Nominees Toast and the company's 2019 SAG After Party the next day, clearly comfortable with going public. But things really got serious at the end of April 2019, when the couple went to Yellowstone Park. A source told People the couple got engaged while visiting the lovely national park, and a photo of Garner from their trip indeed shows an enormous diamond on her left hand.

In September, when the actress won her Emmy, she kissed Foster before heading onstage to accept the award. Foster gushed on Instagram about her talent and his joy at it being recognized so officially. "I consider myself the luckiest guy on the planet to be able to watch whatever you do from the front row, with a bag of popcorn and your hand wrapped in mine," he posted.

Still, everyone was surprised when the couple put up another synchronized social media post, sharing photos of each other heading to New York City's City Hall to be married on December 27, 2019. This time the photo and caption were identical, appropriate for two uniting as one. Designer Zac Posen shared another snap of the happy newlyweds, congratulating them both.

They've been fairly secretive about all but the boldest outlines of their relationship, but it's likely this couple will shine in the spotlight for their individual works instead of social gossip in 2020.

More like this
Meghan Trainor & Daryl Sabara Are Expecting Their Second Baby
By Jake Viswanath
Pamela Anderson’s Dating & Marriage History Could Be Its Own TV Series
By Jake Viswanath
Paris Hilton & Carter Reum’s Relationship Timeline Includes A Surprise Baby Boy
By Bustle Editors
Everything You Need To Know About Kanye's Post-Kardashian Dating Life
By Bustle Editors
Get Even More From Bustle — Sign Up For The Newsletter
From hair trends to relationship advice, our daily newsletter has everything you need to sound like a person who’s on TikTok, even if you aren’t.