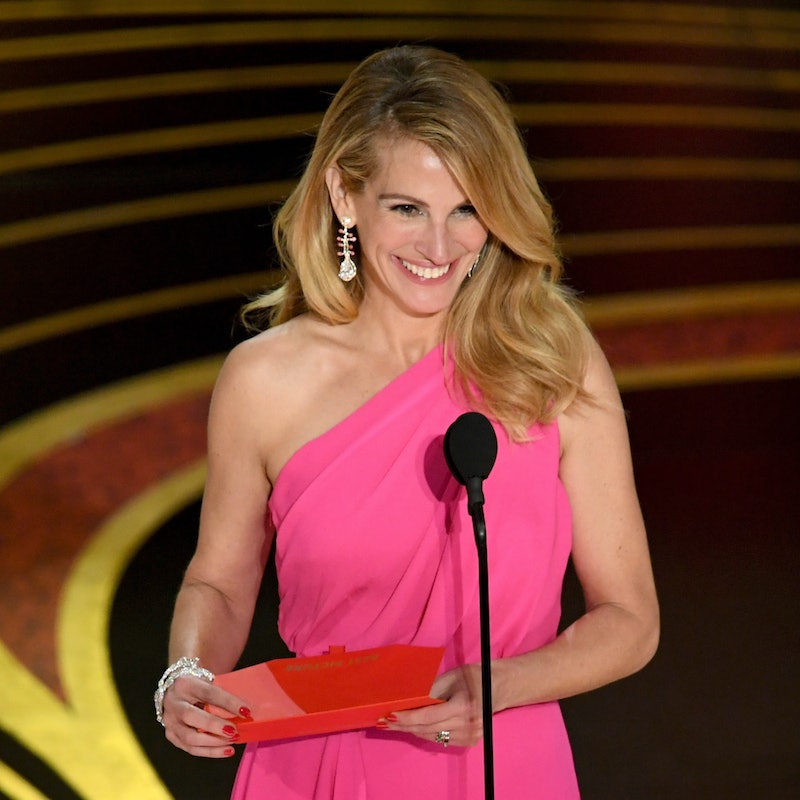 You never know who's going to make a surprise appearance at the most star-studded and glamorous awards show of the year. When Julia Roberts appeared at the 2019 Oscars, it came as a bit of a shock to the audience and viewers alike. Given Roberts' position as one of the most recognized and celebrated actors in Hollywood, though, it makes sense that the Academy would recruit her to deliver the biggest award of the night. Roberts presented the award for Best Picture to Green Book at the end of the very, very lengthy awards show.

Roberts handed out the award to the people behind Green Book in a one-shoulder gown with a ruffled hem. The real statement of the look, though, was the color of the dress. The gown was hot pink, something that was reflective of the dominant color trend of the evening. Whether in metallic suits or head-to-toe tulle, pink was everywhere on this year's Oscars red carpet. While some may say millennial pink died somewhere at the end of 2017, it seems the hue is here to stay for at least a little bit longer. And if you're not quite sure, just look at Roberts' Elie Saab gown. It's a definitely show-stopper.

Roberts paired the summer-y gown with simple strappy heels in a matching rosy shade, diamond drop earrings, and a simple diamond bracelet. The whole look was fairly understated, but a major color statement — especially for an actor who usually sticks to neutral tones on the red carpet. Many of Roberts' past red carpet looks are black and white, so the pink is a welcome surprise.

The actor wore her hair with a deep side part and simple, loose waves swept to one side, highlighting the shape of the gown itself. All in all, the look was fairly tame (aside from the bold color, of course), staying true to Roberts' classic sense of style.

The drop earrings, though simple at first glance, were actually asymmetrical and intricately detailed upon further inspection. They were designed by CINDY CHAO The Art Jewel Architectural Earrings and made the perfect complement for the simple silhouette of the gown and shoes.

Another fun detail of Roberts' entire look came down to something other than her hair, makeup, and accessories. In fact, it was her nail polish. The polish perfectly matched the color of her dress and the color of her shoes. This type of accessory color-blocking complements the more intricate details of the earrings perfectly. Everything highlights each other without any one detail standing out too much — well, except for the color of the dress maybe, but that's kind of the point of it.

While the award that Roberts handed out may end up being a bit controversial due to the winner of the award, Roberts' look at the Oscars will certainly be less divisive. It's hard to dislike such a fun twist on a classic silhouette, even if pink isn't your very favorite color in the whole world. Plus, let's be honest with ourselves here: Everyone loves Julia Roberts.