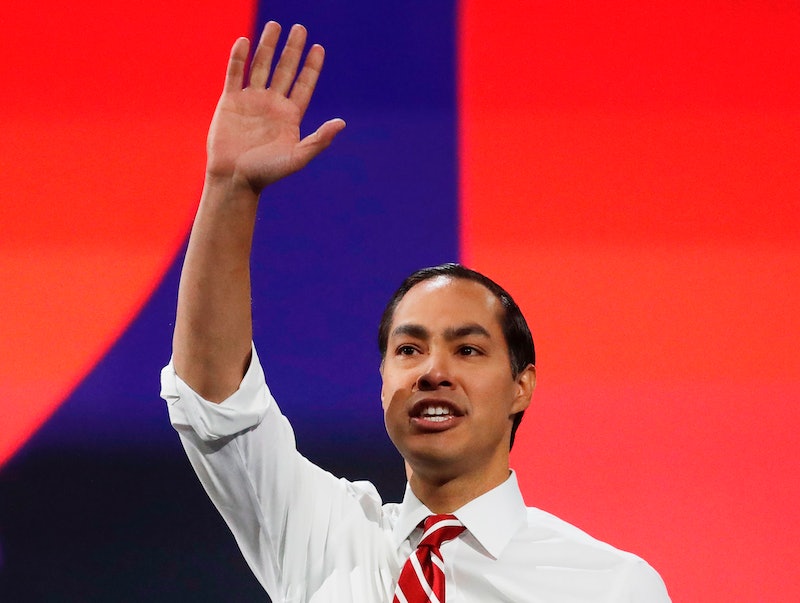 "I want to be a president for all people," former Housing and Urban Development Secretary Julián Castro told Bustle before Christmas, about a week prior to ending his campaign for president after lagging behind both in polls and fundraising. Before I spoke with him, I would've called that statement just a really good sound bite. And though it is, Castro's campaign stood out in the Democratic field because of his focus on people of color and other marginalized communities — his active commitment, in other words, to all people. When it comes to polls and fundraising, Castro's campaign wasn't groundbreaking. But it triggered a powerful public response by setting a new bar in its approach to human rights — one that the other Democrats will hopefully attempt to meet.

And, as far as I know, Castro's campaign is among the first to contact a young, nonbinary reporter for an interview with a women's website. I was surprised and a little confused by the invitation, thanks to impostor syndrome, but also because the issues that I focus on — reproductive health, LGBTQ rights, racial justice — aren't usually central to any candidate's platform. They're typically relegated to a second tier. But Castro, as one of the few candidates of color left in the race, focused entirely on policies that address inequality in fields like these.

Castro was the only candidate whose platform on abortion used a reproductive justice framework, rather than more familiar "pro-choice" language. The term "reproductive justice" was created by Black women in 1994 who disagreed with framing abortion access as a "choice" when many people don't have access to that choice at all, for example, if they are poor. "Our work must extend beyond that to ensuring that no matter who you are, you're able to exercise your reproductive rights," he told me. For his campaign, that meant eliminating the Hyde Amendment, which bans federal funds from going to most abortion services, to increase access for poor people. It also meant explicitly including trans people in the conversation.

Castro was the first presidential candidate in history to speak about the trans community's access to abortion during a June 2019 Democratic debate. "Just because a woman — or let’s also not forget someone in the trans community, a trans female — is poor, doesn’t mean they shouldn’t have the right to exercise that right to choose,” he said. Trans people noted on Twitter after the debate that Castro likely meant trans men and nonbinary people should also have access to abortion, and his campaign manager Maya Rupert confirmed that he misspoke.

Castro told me it was important for him to make the effort to be inclusive publicly. "When it comes to the trans community, I saw very clearly both as mayor of San Antonio and as secretary of housing that too often times the trans community is forgotten, excluded, discriminated against, even persecuted," he said. He wanted to point out clearly during the debate "that we should recognize them when we make policy on reproductive health as well."

Before dropping out on Jan. 2, Castro was one of the few candidates of color left in the race. In November, he criticized how this would affect him during the nominating process, which allows Iowa and New Hampshire — two overwhelmingly white states — to vote first. At the time, Iowa's Republican and Democratic state party chairs called Castro's criticisms "identity politics." Castro responded in a statement, saying, “Speaking up for the representation of every voter in our elections is as American as it gets, and if we can’t fight for that, then why in the hell are we Democrats in the first place?”

He aimed to center marginalized people, even if it meant he was the only candidate on the stage to try at all.

As a reporter, I often feel like I spend a lot of time justifying why the issues I write about are important. I often speak to people who aren't affected by abortion restrictions, so they don't understand or believe that they negatively impact people. In my own life, I spend a lot of time explaining why someone should respect my pronouns. Castro's campaign was working toward a world where talking about these issues isn't something to be "justified"— because they need to be addressed head-on.

Intersectionality — a framework that acknowledges the ways discrimination against race, class, and other identities overlap — used to be something that politicians received bonus points for, but Castro told Bustle it was central to his campaign from the beginning. His mother, Maria del Rosario “Rosie” Castro, a civil rights activist in Texas, taught him the importance of approaching issues through an intersectional lens. When she was young, Rosie testified before the Texas Senate subcommittee in favor of lowering the state's voting age from 21 to 18; as an adult, she worked with the Raza Unida Party, a third-party alternative to the Democratic Party, to address the unique social problems Mexican Americans face, according to Texas Monthly. "I saw that [intersectionality] growing up with my mom," he said.

Though intersectionality is a key part of his policies, Castro acknowledged why it's often criticized by Republican opponents. He used to joke with Joaquin, his twin brother who serves in the House of Representatives, that "you couldn't go to a rally of liberal folks without focusing on 25 different things."

Though Castro referenced the left's approach to social issues jokingly, it draws attention to a significant shift in how politicians regard identity politics. After President Trump tweeted racist comments about Democratic congresswomen in July 2019, Castro called him one of the "biggest identity politicians that we've had over the past 50 years," according to NPR. He argued that Trump was trying to divide people along racial and ethnic lines to amp up his base. "How do you combat that effectively?" he asked NPR. His solution: building coalitions of people who represent all Americans, who believe that the nation will be "more successful if we appreciate our differences."

When Castro's campaign reached out to me, it captured in part why his strategy felt very different than other candidates'. Castro's unabashed embracing of an "identity politics" that centers and uplifts marginalized people stands in contrast to the majority of politicians. Sen. Cory Booker is the only other Democratic candidate to not use gendered language in his abortion policy platform. Former Vice President Joe Biden, Sen. Elizabeth Warren, Sen. Bernie Sanders, Mayor Pete Buttigieg, and Andrew Yang all frame abortion as "a woman's right to choose" or otherwise as a women's issue.

Castro's attempt to include trans people while discussing abortion wasn't a big deal just because he tried — it was a big deal because he tried, made a mistake, took the criticism in stride, and continued in trying to get it right. It's an example of a running theme in his campaign: He aimed to center marginalized people, even if it meant he was the only candidate on the stage to try at all.

Many Democrats believe more moderate candidates will have a better shot at beating President Trump. All of the top-polling candidates are also white, suggesting that the criticism of "identity politics" does little to temper the racism that affects the nominating process. Maybe Castro was too "unabashed" in his progressivism.

Castro told me that his fight for marginalized people wasn't "a side project" of his campaign. "That's been a feature of this campaign," he said. For a moment, when I received an invitation to interview Castro, I felt as though the issues I write about and the person I am were no longer side projects.

A video announcing the end of Castro's candidacy shows clips that capture the focus of his campaign: He says the names of Black people killed by police brutality while talking about his criminal justice reform plan. He visited Matamoros, Mexico, where Salvadoran migrant Oscar Alberto Martinez Ramirez and his 2-year-old daughter Valeria drowned trying to cross the Rio Grande. "I haven't been afraid to stand up and speak the truth and fight for people that are often not fought for," Castro said in one of the clips. As we step into 2020, I hope the other candidates will learn from that example.

More like this
What The UK Blocking Scotland’s Gender Recognition Bill Means
By Sam Ramsden
25 Inspiring Quotes From Black Women To Celebrate Black History Month
By Kyli Rodriguez-Cayro and JR Thorpe
The UK Government Is *Finally* Banning Conversion Therapy
By Sophie McEvoy
24 History-Making Black Women You Probably Didn't Learn About In School
By Ayana Lage and JR Thorpe
Get Even More From Bustle — Sign Up For The Newsletter
From hair trends to relationship advice, our daily newsletter has everything you need to sound like a person who’s on TikTok, even if you aren’t.