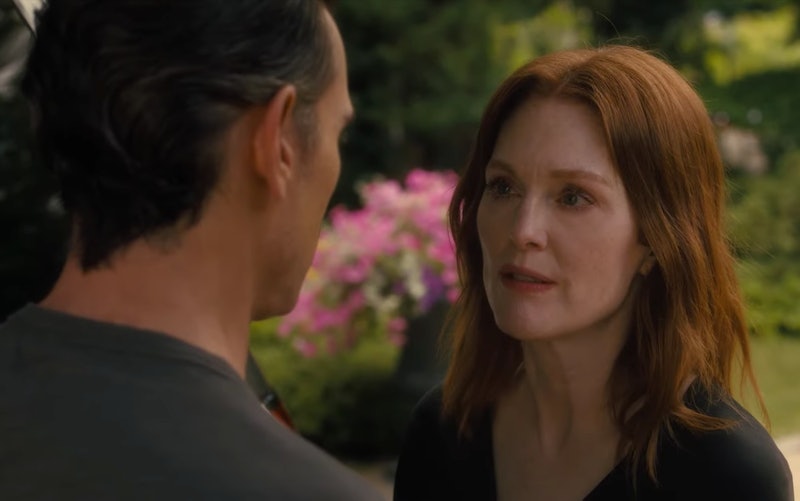 Choice, consequence, and accountability are the three themes writ large in After The Wedding. At its centre, two women must attempt to coexist within an unusual family dynamic while their moral compasses point in opposite directions. Originally a Danish Oscar nominee, the film has been adapted by writer-director Bart Freundlich, with the two male protagonists, originally played by Mads Mikkelsen and Rolf Lassgård, replaced by two female leads. Julianne Moore, who is married to Freundlich, plays media mogul and CEO Theresa, while Michelle Williams plays an orphanage co-founder called Isabel. The American version may have divided both critics and viewers, but Moore tells me she was delighted by the opportunity to play a character that was completely "self actualised."

"Both [women] have taken very, very different life choices," she says of Theresa and Isabel. "And not just that, but they're tremendously judgemental of each other [laughs], which I thought was interesting. There’s one scene where they're jockeying for dominance — and they're jockeying for dominance over one another. It has nothing to do with a man. Generally, when you see women in a scene trying to assert their dominance, it's usually about, 'That's my boyfriend.' 'No, that's not my boyfriend.' But, instead, it had to do with their individual life choices."

Throughout the film, the light and shade in Moore's character becomes impossible to distinguish. Every decision is cast in shadow, and as an audience, it's difficult to decide whether Theresa's choices are selfish or selfless, morally corrupt or alarmingly altruistic, wise or totally misguided. And, as always, Moore brings out those dichotomies with ease and great subtly. Theresa may be a woman obsessed with control, but, by the end of the film, the puppet master learns she too has strings.

Rowena Henley: What qualities do you love or admire in your character Theresa, and what do you think are her greatest flaws?

Julianne Moore: Well, I think they're kind of the same thing. It's interesting. Somebody who has such a big life and built it so deliberately obviously has a great deal of belief in her own ability to control things. I think that she's relied on that. She's relied on her intelligence, her endurance, and her hard work to build exactly the kind of life that she wants, certainly in the business world. But also the way she's built her family. And I want the audience to know this woman has very deliberately constructed her life and worked hard for it because she's wanted it and she values it. So, all those qualities have gone into assembling that kind of life. But ultimately, she's suddenly reaching this point where there's something that she can't control. It's completely out of her control. She's furious and I think that her rage at not being able to control something leads her to do something that, actually, at the end of the day, is unethical. But you understand it because you understand her. So, this is somebody who, like I said, her greatest asset is her ability to rely on herself and probably her biggest flaw is the same thing: her feeling that she should be able to control it. When, in fact, we can't.

RH: You’ve played a lot of complex characters before, but is there anything specific you did in preparing for Theresa?

JM: I did my usual amount of research. I actually talked to a lot of people who own their own business. We know somebody who does exactly what Theresa does and I spoke to him a lot and spent some time observing him, talking, looking at his company, and talking to his employees. I talked to a lot of doctors about what’s physically going on with Theresa, and I spoke to a biographer, actually, a woman who did exactly what Theresa did. So, it was pretty interesting because a lot of the people who have done what Theresa has done and, also, people who have accomplished a lot in life can be very secretive about what's going on with their personal life. So, I just spoke to other people about their experience with the actual individual.

RH: In the original Danish version of this film, your character and Michelle’s character are both played by men. What do you think the gender swap did for the story this time around?

JM: I think that it raises the stakes emotionally, actually. Because in the original, with the two characters being male, there was not a conscious choice in it. It was a lot of kind of, like, “Oh, well, this is just the way that life happens.” But because they're both females [in this film], it was something very deliberate, actually, for all the characters, even for Billy [Crudup]’s character, Oscar. It was a deliberate choice that all of us had made and they all believed they made the best decision they could at the time. But they're now kind of dealing with the fallout and the consequences of that decision. So, in a sense, because it involves another human being, it's really raises the stakes considerably.

RH: I read that you and your husband [Bart Freundlich, the film’s director] approached Michelle directly for this role, what made you both think that she would be the right fit?

JM: The part is so complicated. Isabel is a very, very complicated character, so I think you need to have an understanding of what she's done with her life and why. Michelle is somebody who is able to communicate those complications so easily, I think, because she's intelligent, and she's talented, and she's sensitive. So, we needed somebody who was able to do that, who had that emotional depth, and she definitely does. I think an example of that is the realisation that plays out on the day of the wedding, which is all one long shot, where she kind of rushes in, looks around and understands the situation that she's in. She plays it so, so beautifully, so we felt really fortunate that she responded to the script and wanted to take part.

RH: I know this wasn’t the first film you’ve worked on with Bart. I was wondering, how you separate work and home life? Do you guys set yourselves a curfew so that you’re cut off from talking about work after a certain time? Or do you have a room in the house where work talk is off limits?

JM: No, there's no cut off. But, this is our fourth film together, and the fact that our children are no longer small was really, really helpful. It was difficult for me to be that absorbed [in work] when I had little kids.

RH: So it's just work chat all the time?

JM: It's work chat all the time.

JM: I hope so, but also remember film doesn't change culture, film reflects culture. So, I more and more think that, when we've reached more gender equality, our entertainment will reflect that too. It’s not the tail wagging the dog, it’s the dog wagging the tail.

RH: So do you feel hopeful that society in general is changing in terms of gender equality?

JM: I do. I think, certainly, there's things that I have seen happen in our country that I feel very heartened by, but I do think that it’s a long, slow path to gender equality.

After The Wedding opens in UK cinemas November 1.