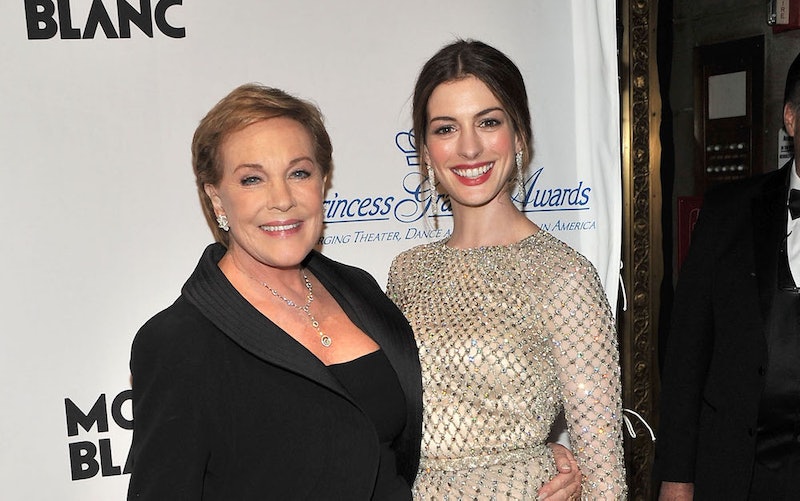 Genovia’s monarch seems to be in the dark about the new Princess Diaries film. Julie Andrews gave a Princess Diaries 3 update and revealed that she didn’t know a script was in the works. Andrews, who depicted Queen Clarisse Renaldi in the first two films, appeared on Watch What Happens Live on Thursday, Oct. 24 and revealed that she hasn’t heard about a script, but the possibility would be “lovely” regardless.

“The truth is I haven’t heard,” Andrews said on the show. “But, there’s been talk about it for quite a while. I think she [Hathaway] had or is having a second child, and she’s busy and I’ve been busy. I think if it happens, it would be lovely, and if it doesn’t, I wouldn’t have known about it.”

In January, Anne Hathaway told Andy Cohen during her own WWHL appearance that there was, in fact, a script for the third film. Hathaway, who played Mia Thermopolis in the films, said at the time, “I want to do it. Julie wants to do it. Debra Martin Chase, our producer, wants to do it. We all really want it to happen. It’s just, we don’t want to do it unless it’s perfect because we love it just as much as you guys love it.”

Based on the Meg Cabot book series, The Princess Diaries followed an awkward teen named Mia Thermopolis (Hathaway) who discovers that she’s a princess of a fictional European country named Genovia. The sequel Princess Diaries 2: Royal Engagement followed Mia’s quest to find a husband in order to assume the role as heir to the throne. In an interview with PEOPLE in March 2016 prior to his death, Princess Diaries' director Garry Marshall teased that the third film could possibly take place in New York.

“I was with Anne Hathaway a couple weeks ago, it looks like we want to do Princess Diaries 3 in Manhattan,” Marshall said. “Anne Hathaway is very pregnant, so we have to wait until she has the baby and then I think we’re going to do it.” (At the time of the interview, Hathaway was pregnant with her son Jonathan.)

Andrews’ appearance on WWHL isn’t the first time she’s expressed an interest in doing a third film. Following Marshall’s death in July 2016, Andrews revealed that the cast felt emboldened to do a possible third Princess Diaries as a tribute to the revered director. She told BuzzFeed in a March 2017 interview, “[Anne] had an idea that she wanted to pursue about it, and I’m all for it.”