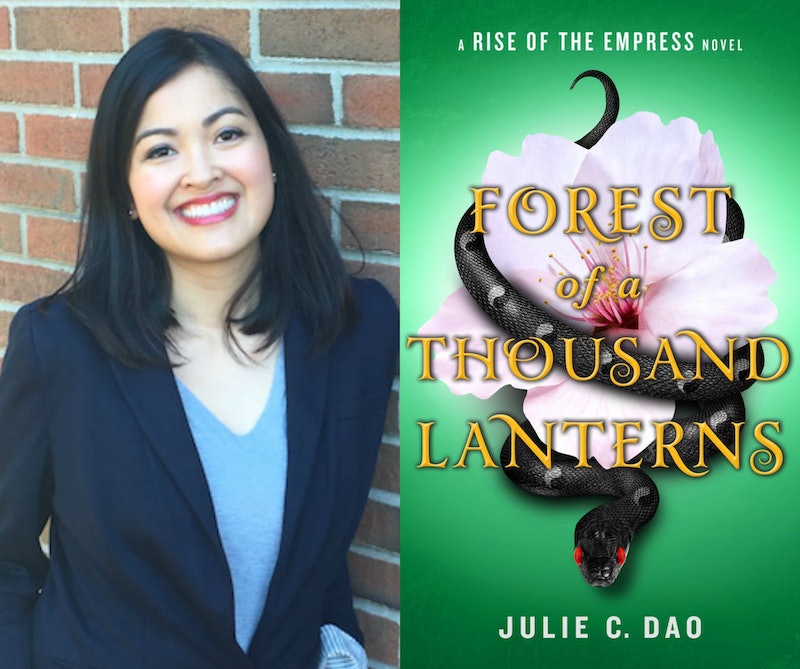 In recent years, fairytale retellings have become one of the most popular young adult genres. Pop into any bookstore and you'll see book after book where the author has taken the princess tropes we know and love and turned them on their heads in fresh, imaginative fantasy worlds. What is a rarity, however, is finding a fairytale retelling that is centered on a different culture from the one in which the original was told. Even more rare? Finding that story, but with the "villain" as the main character. But that didn't stop Julie C. Dao from tackling both of the above in her debut novel Forest of a Thousand Lanterns, out now.

The story follows 18-year-old Xifeng, a beautiful young woman who the stars say is destined to become Empress of Feng Lu... but only if she embraces the darkness within her. Growing up as a peasant in a forgotten village, Xifeng longs to fulfill the destiny promised to her by her cruel aunt, the witch Guma, who has read the cards and seen glimmers of Xifeng's majestic future. But in order to achieve greatness, she must spurn the young man who loves her and exploit the callous magic that runs through her veins — sorcery fueled by eating the hearts of the recently killed. For the god who has sent her on this journey will not be satisfied until his power is absolute.

"I combined multiple elements that shaped me as a person and a writer. I loved classic fairytales growing up, which is where Snow White comes in, and blended that with East and Southeast Asian folktales I grew up reading or hearing from my parents," Dao tells Bustle. "I chose an Imperial Chinese-inspired setting for my mother, who loves epic dramas and miniseries set against that backdrop, and for whom this book was written. And, of course, I love powerful female characters and complex antiheroes. Put those together and you get Forest of a Thousand Lanterns."

It's Xifeng as the antiheroine that is one of the most compelling aspects of the novel, a take that is different from many of the fairytale retellings on shelves today. Because, like most villains, Xifeng does not start out fundamentally evil, and as her story progresses, readers will see just exactly what led her down the path of darkness.

"My number one priority, when I first sat down to write FOTL, was to create an antiheroine the reader would see only as the heroine," Dao says. "No matter how dark Xifeng’s motivations and how far she spiraled downward, I wanted to try to help the reader along in understanding her and maybe even rooting for her because of her fundamental desires: to be free, to make her own choices, to raise up the people she cares about. I took it on as the ultimate challenge; can I give a character twisted motivations and still have her be sympathetic?"

Another unique aspect of Forest of a Thousand Lanterns is the focus on female relationships over romantic ones. Though romance plays a part in Xifeng's story, her relationships with other women and Kang, her close friend and confidante at court, take a more central role in the story.

"Some of the deepest, most profound relationships in my life have been shared with other women. In addition to the romance, I wanted to explore familial and platonic bonds between women because they can be some of the strongest you’ll ever find, yet also fragile and delicate at times," Dao says. "I wanted a cast of well-rendered women, each strong in her own way. Human relationships can be complicated and messy, and I wanted to portray this in all of the female bonds and conflicts I touched on in the book."

Throughout the novel Dao also doesn't shy away from portraying Xifeng's descent into darkness in unflinching terms, saying, "If my character's arc spirals downward, I want to take them all the way down...no apologies," but Dao did take some real world inspiration for Xifeng that might be surprising.

"Empress Wu, the only reigning female ruler of China, was a big inspiration for Xifeng. I found it interesting that she is often portrayed as bloodthirsty and underhanded—and yet, when reading about her, I didn’t feel that anything she had done was so very different from what male rulers of her time had done," Dao says. "I also wanted to explore the themes of people who crave power, and what type of personalities they might have and why they’d want to achieve dominion over other humans. There is plenty of fodder for storytelling in our world—I’ll leave it at that!"

Lucky for readers, though, Dao is not leaving Xifeng's story there, with a planned sequel already in the works. And it seems like she's already got a few more curveballs in store.

"There’s a lot more pressure with regard to writing a book under deadline that you know will be published," Dao says. "There was a sense of freedom with Book 1, because nothing was expected of me. But the story for Book 2 is one that excites me in a different way than Book 1 did and I hope I can do it equal justice!"