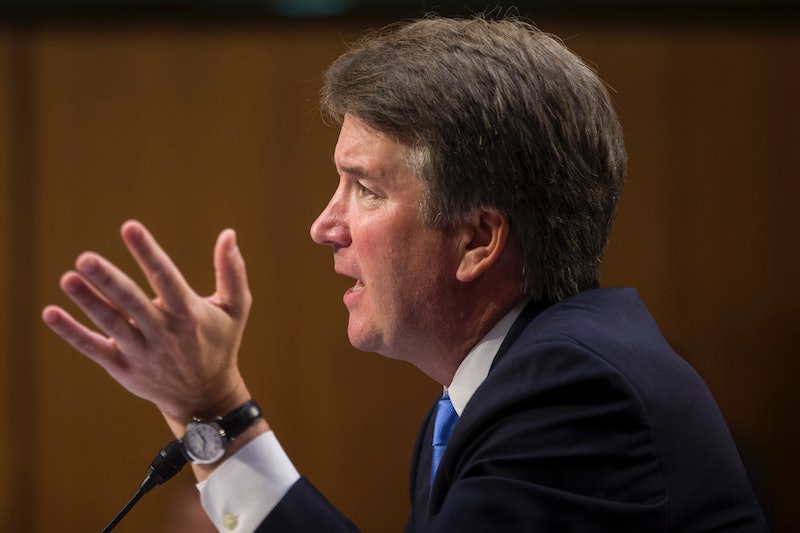 A third woman came forward accusing Supreme Court nominee Brett Kavanaugh of sexual violence. This time, the accuser went public as a client of attorney Michael Avenatti, who also represents Stormy Daniels in her lawsuit against President Donald Trump. Avenatti posted a tweet on Wednesday morning with screenshots he says are of "a sworn declaration from my client," who he names in a second tweet as Julie Swetnick. Swetnick accused Kavanaugh of "targeting" girls as a teen in a sworn statement that also includes allegations of "gang rape" by boys at parties in the '80s. Kavanaugh has staunchly denied all previous allegations. Bustle has reached out to the White House and Kavanaugh’s lawyer, Beth Wilkinson, for comment on this latest allegation.

UPDATE: Kavanaugh said in a statement in response to Swetnick's allegation through the White House, according to Toronto Star's Daniel Dale, "This is ridiculous and from the Twilight Zone. I don’t know who this is and this never happened."

EARLIER: The declaration states that Swetnick is a resident of Washington D.C. with many clearances to work with governmental departments and that she graduated from a high school in Gaithesburg, Maryland, near where Kavanaugh went to school. In the '80s, Swetnick said, she went to "well over 10 house parties" where Kavanaugh and his friend Mark Judge were reportedly present. (Judge was also implicated in the allegations against Kavanaugh from Christine Blasey Ford. Judge said through a lawyer that he has "no memory of this alleged incident.")

At these parties, she claimed she saw Judge and Kavanaugh "drink excessively and engage in highly inappropriate conduct, including being overly aggressive with girls and not taking 'No' for an answer." This included, she claimed, "the fondling and grabbing of girls without their consent." Her allegations about the boys at these parties, however, goes beyond fondling, and the details in the statement can be triggering.

Swetnick claims that Judge, Kavanaugh, and others attempted to "'spike' the 'punch' at house parties I attended with drugs and/or grain alcohol so as to cause girls to lose their inhibitions and their ability to say 'No.'" She claims that Judge, Kavanaugh, and others made efforts to "'target' particular girls so they could be taken advantage of" — generally someone who was "alone" or "shy."

Judge, Kavanaugh, and others allegedly tried to make girls be "inebriated and disoriented so they could then be 'gang raped'" by a "'train' of numerous boys," Swetnick claims. She claims to have a "firm recollection" of seeing boys lined up outside rooms to participate in this, which allegedly included Judge and Kavanaugh.

Swetnick goes on to claim that in "approximately 1982," she was "the victim of one of these 'gang' or 'train' rapes where Mark Judge and Brett Kavanaugh were present." She claims that she was "incapacitated without my consent and unable to fight off the boys," adding that she believes she was "drugged using Quaaludes or something similar placed in what I was drinking."

She reportedly told "at least two other people" what allegedly happened shortly after and that she is "aware of other witnesses that can attest to the truthfulness of each of the statements above."

Avenatti had said publicly for days that he had a client with allegations against Kavanaugh, and his tweet, he says, shows a screenshot of emails he sent to Mike Davis, the chief counsel for nominations for the Senate Judiciary Committee. The email screenshot seems to show that Avenatti asked for a response to previous emails demanding an FBI investigation of allegations and to know if the committee had asked Judge to testify. Avenatti also said that his client was willing to submit to a polygraph examination.

Swetnick is the third woman to come forward with allegations of sexual misconduct against Kavanaugh. First, Ford came forward in an interview with the Washington Post where she claimed Kavanaugh attempted to sexually assault her at a high school house party. Then, Deborah Ramirez came forward in an interview with The New Yorker claiming that Kavanaugh exposed himself to her at a college dorm party. Both women had told their stories to politicians, and Kavanaugh has repeatedly denied both allegations.

In the New Yorker piece, Elizabeth Rasor, who was in a relationship with Judge for about three years, claimed that Judge had told her "of an incident that involved him and other boys taking turns having sex with a drunk woman," according to reporters Jane Mayer and Ronan Farrow. Judge's attorney told The New Yorker he "categorically denies" Rasor's claim.

Ford and Kavanaugh are scheduled to testify to the Senate Judiciary Committee on Thursday morning. Sen. Chuck Grassley, a Republican who chairs the Senate Judiciary Committee, had set the date for Kavanaugh's nomination vote by the committee for Friday before the third allegation came out. It remains to be seen if any of those details will change with this latest claim.