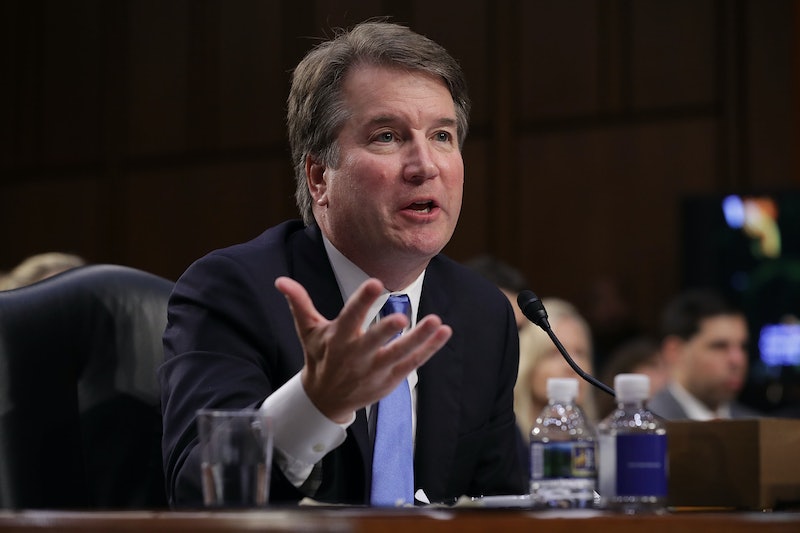 According to a Tuesday notice by the chairman of the Senate Judiciary Committee, Sen. Chuck Grassley, the date for Brett Kavanaugh's nomination vote has been scheduled for Friday. It bears mentioning that the Friday confirmation vote is meant for the committee alone, according to The Hill. The vote would be taking place just one day after the SCOTUS nominee will testify before the committee about California professor Christine Blasey Ford's accusation of sexual assault from decades ago — an allegation that Kavanaugh has categorically denied.

In two separate statements, one before being called on to testify in front of the Senate Judiciary Committee and one after, Kavanaugh has denied Ford's accusation as entirely false. In his first statement through the White House, Kavanaugh said, "I categorically and unequivocally deny this allegation. I did not do this back in high school or at any time."

In his second and renewed denial, right after being called on to appear for the committee hearing, Kavanaugh said, "This is a completely false allegation. I have never done anything like what the accuser describes — to her or to anyone. Because this never happened, I had no idea who was making this accusation until she identified herself yesterday."

The SCOTUS nominee added, "I am willing to talk to the Senate Judiciary Committee in any way the committee deems appropriate to refute this false allegation, from 36 years ago, and defend my integrity." So far, the president has expressed support for Kavanaugh, including describing him as "a great gentleman" and that "I feel so badly that he’s going through this."

The SCOTUS nominee has recently been accused of sexual assault by another woman named Deborah Ramirez, a woman who went to Yale with Kavanaugh. New Yorker journalists Ronan Farrow and Jane Mayer reported:

Kavanaugh had exposed himself at a drunken dormitory party, thrust his penis in [Ramirez's] face, and caused her to touch it without her consent as she pushed him away

This allegation, too, Kavanaugh denied through a statement to The New Yorker. "This alleged event from 35 years ago did not happen," he said.

The Senate Judiciary Committee has not scheduled a hearing on Ramirez's allegation.

As both the public hearing and confirmation vote for Kavanaugh inches closer, the pressure is building on Republican senators as far their possible support or opposition for the SCOTUS nominee is concerned. One of those senators, Republican Sen. Susan Collins of Maine, has briefly spoken about Kavanaugh and Ford's public hearing, and how she wanted to listen to both.

According to The New York Times, Collins said, "Obviously if Judge Kavanaugh has lied about what happened, that would be disqualifying. For my part, I believe that it’s very important that both Professor Ford and Judge Kavanaugh testify under oath about these allegations."

"I need to see them and listen to their answers to the questions in order to make an assessment," Collins added. As mentioned before, the Friday confirmation vote is meant only for the Senate Judiciary Committee. According to The Hill, the full Senate confirmation vote could be held next week.