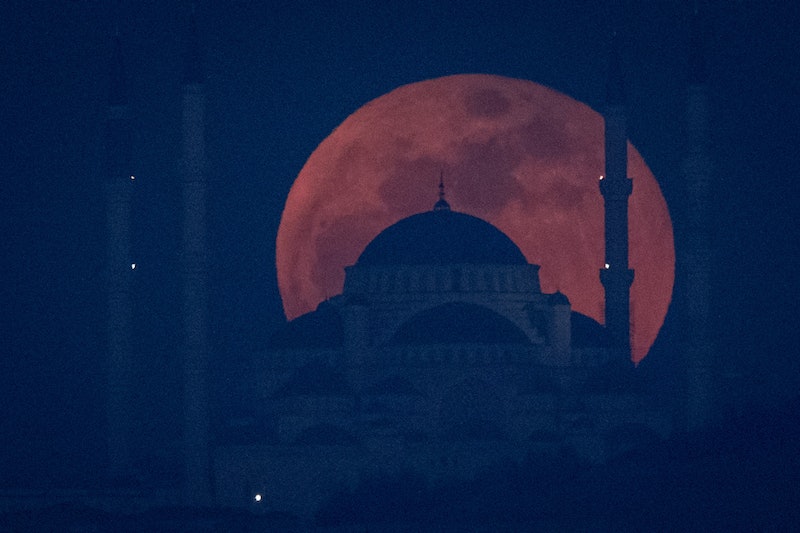 The full blood moon, accompanied with the longest total lunar eclipse of the century, happens the day after Mercury turns retrograde — joining four other (primarily masculine) retrograde planets. This is a massive amount of masculine cosmic energy swirling around at once, and the July blood moon spiritual meanings are extremely relevant to what's happening socially in the the world at large. "Most of the masculine planets in our solar system are retrograde, meaning this is time for review, looking inward, and clearing," the blog Recreating Balance explained.

During its retro backspin, Mars is reviewing its actions and trying to make its way back to the divine feminine, and it's encouraging humanity to do the same. Two sides of the same coin, the world is most peaceful when masculine and feminine energy are balanced and integrated versus at odds with each other. Spiritually, the July 2018 blood moon is asking us to take active steps toward healing a wound that's been festering for millennia.

Obviously, it's going to take a helluva lot more than a blood moon to heal the rift between the masculine and feminine. However, the July 2018 blood moon seeks to open more people up to acknowledging that there is indeed a real problem, and perhaps each individual person has behavior and beliefs that need to be examined. Ready or not, the blood moon and lunar eclipse are going to a hold up a mirror, and not everyone will like what they see.

"Under this blood moon eclipse energy, the karma of our soul is going to be stirred, and if we pay attention, we may get a glimmer or a reminder as to why our soul chose this journey in the first place," the Intuitive Astrology blog on Forever Conscious revealed. "While we may look at life through our physical eyes as being unfair, good, bad, and everything in between, the eyes of our soul sees things differently."

There's nothing lighthearted about internal examination, assessing your faults, and trying to figure out how you fit into the bigger picture of the universe. Full moons and eclipses are always intense, kind of like Lorelai Gilmore after a few cups of coffee. A blood moon and total eclipse is akin to Lorelai after a few pots of coffee. Basically, it's going to make you feel bajiggity AF.

"This Aquarius eclipse is going to push us," Intuitive Astrology cautioned. "It is going to take from us. It is going to penetrate us right where it hurts, so we can clear, release, and find our freedom." Think of it like this. In a tunnel, there is light on both sides. Right now, humanity is smack in the middle, which makes it feel akin to being trapped in a dark cave. It's hard to see how you got in and even harder to find the way out.

The July 2018 blood moon seeks to move you a few steps forward so you can see a glimmer of light at the end of the proverbial tunnel. "As the longest lunar eclipse we will ever experience, this is an opportunity for us to dig deep, and reach further to clear and let go of all that we no longer want to carry," Intuitive Astrology explained. "This is a time for us to purge, cleanse, and detoxify. This is a time for us to release the karma of many lifetimes."

Easy peasy, right? Unfortunately, the blood moon isn't some kind of magic cleanse. You won't wake up July 28 to find that the blood moon has rid the world of everything dark and twisty. Some people still aren't willing to actively examine their behavior or admit that change is the only path forward. Spiritually is a process that people need to participate in to receive the benefits. On the other hand, just because someone ignores the messages from the blood moon, that doesn't mean they won't be affected.

Things may become more difficult for them and they might struggle to understand why. The school of hard knocks is a painful path, and things might get worse before they get better. Overall, the July 2018 blood moon and lunar eclipse represent a turning point for humankind. And, because everyone has free will, just which way humanity will choose to turn remains to be seen.