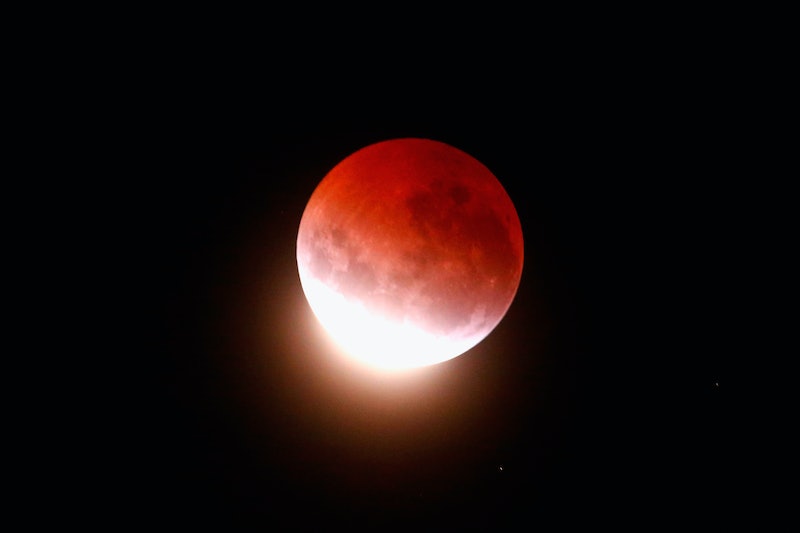 July is a cornucopia of astrological activity culminating in Mercury retrograde July 26 and a full blood moon and total lunar eclipse July 27. If you haven't heard of blood moons, and you're wondering if blood moons affect your zodiac sign differently than regular full moons, the answer is yes — because they always accompany a total lunar eclipse. Even though you won't be able to see the eclipse in North America, eclipses are powerful players in astrology, and they always stir up a lot of emotions.

The July 2018 full blood moon isn't actually bloody, even though the fallout from the lunar eclipse might make it feel otherwise. The blood moon gets its name from the reddish hue it takes on when the Earth and sun align and block light to the moon. Historically, superstitious people attribute blood moons to misfortune, kind of like the chaos that ensues in the movie Practical Magic after a blood moon.

While seen as unlucky, it's likely that calamity is associated with blood moons because the fear that something bad is going to happen causes people to make poor choices. What's more, the planets that influence the eclipse also play a role in how a blood moon and lunar eclipse affect you.

"The lunar eclipse July 2018 astrology is mainly influenced by Mars, making this an emotionally challenging eclipse," Astrologer Jamie Partridge explained on Astrology King. "Mars' anger and frustration could easily turn to reckless actions because of a harsh aspect to Uranus. A more gentle influence from Saturn will make it a little easier to calm down, and some fixed stars give patience and decisiveness in a crisis. However, these same stars can also cause aggression and emotional problems."

What's more, the July 2018 total lunar eclipse is the longest lunar eclipse this century, which only intensifies its cosmic energy. Basically, a lunar eclipse is like a full moon hopped up on more coffee than Lorelai Gilmore drinks in a year. It's strong AF, and spares no one.

"A lunar eclipse focuses your attention on your emotions, intimate relationships, and your home and family," Partridge noted. "The longest total lunar eclipse this century is going to have an incredibly powerful influence on your private life."

So, let's break it down. You'll be one day into the July 2018 Mercury retrograde cycle when the overly-caffeinated blood moon arrives on the scene to make you feel even more bajigitty. If you can stay home and pull the covers over your head July 26 to 27, that would be ideal.

However, the news isn't all bad. While it might be painful, as transformations tend to be, the July 2018 blood moon is akin to a hard reset for your emotions. If things have been building to an unbearable crescendo the past six months, the blood moon and lunar eclipse can give you a clean slate. Though there might be tears, this karmic experience will actually help you rid yourself of some unwanted emotional baggage. Think of it like a cleanse for your soul.

A solar eclipse always precedes a lunar eclipse, and this month it happened July 12. This means the eclipse energy is already underway. If you've been feeling out of sorts, the July 2018 eclipse cycle is likely to blame. "In the weeks to come, expect the unexpected," Astrologer Ananda Shree explained on her website. "Eclipses are often tipping-points that shift situations, expedite change, and sometimes even pull the rug out from underfoot."

Eclipses can be even more disorienting when you're not aware they're happening. During the 2017 eclipse cycle, there was so much hype about the total solar eclipse in August (because it was visible to almost everyone) that you were likely prepared to experience some eclipse side effects. When eclipses aren't visible in your hemisphere, you're not paying as much attention, which means it's easy to get blindsided by their unstable energy.

During this particular lunar eclipse, your emotions will be in overdrive. Passion will be more powerful, anger can be explosive, sadness and frustration might feel overwhelming, and moments of happiness are likely to be euphoric. I'm not going to lie; it's going to be rough. However, the silver lining is that it's part of the growing pains necessary for caterpillars to emerge from their cocoons as beautiful butterflies.

Even if you feel like you're stumbling around in the dark, in the words of the late Leonard Cohen, "There is a crack in everything. That's how the light gets in." Translation: Look for the light, follow it out of the tunnel, and let peace and relief wash over you like a cool eclipse moon bath. Feels good, right?

More like this
Angel Number 333 Is All About Self-Love & Alignment
By Brittany Beringer and Kristine Fellizar
The Spiritual Meaning Of Angel Number 000, Explained
By Kristine Fellizar
October's Astrology Includes Mars Retrograde & A Solar Eclipse
By Nina Kahn
Here’s Your Daily Horoscope For September 29, 2022
By Mecca Woods
Get Even More From Bustle — Sign Up For The Newsletter