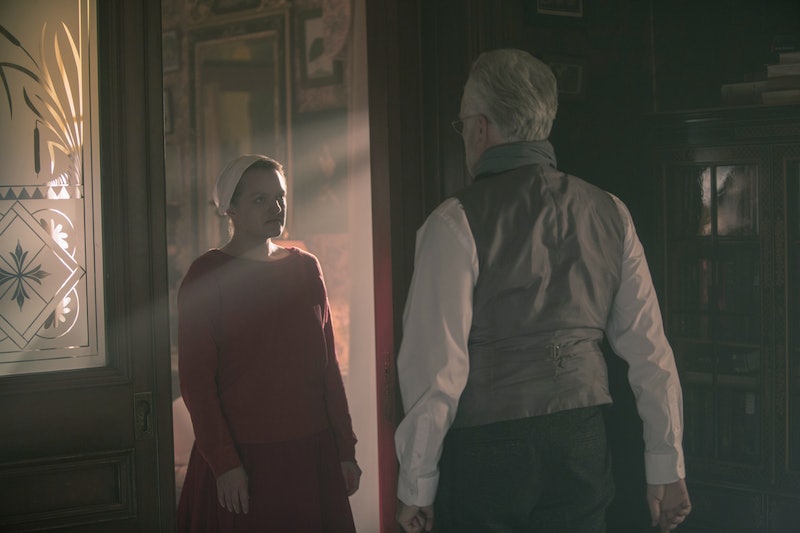 Spoilers ahead for The Handmaid's Tale Season 3. June may be the protagonist on The Handmaid's Tale, but she's not a hero, or at least not yet. Every victory could lead to a setback, and every lesson may prove obsolete. It's hard to know how to feel about June killing Commander Winslow on The Handmaid's Tale. It's bad*ss, but is she really getting better at being a rebel in Gilead or will this end as badly as before?

Not only did she kill him during a rape attempt upon returning to Jezebel's, the Marthas covered it up for her. Once again June gets away with the impossible, but this time as a result of a previous good deed. It's a happy coincidence that the Martha who found June at the scene of her latest crime recognized her as the woman who saved her from the colonies. For once, something she did paid off. This is also the first time she's killed someone — directly at least.

This isn't a normal hero's journey. If this were a movie, June's time in the hospital would be her rock bottom, or "dark night of the soul," and she'd be marching ahead with her plan to defeat the bad guys while successfully applying every single lesson she's learned along the way.

The Handmaid's Tale is taking a more complex, and perhaps more realistic approach for television as a longer form of storytelling, and for the real world of 2019. June does not learn from her mistakes in a way that we can easily pinpoint or quantify. Most of the time, her rash decisions get innocent people killed. Specifically, as Alexis Nedd pointed out for Mashable, two black women died for June's cause, and it's not the first time that people of color suffer instead of her. June is still alive due to privilege and luck. We can't forget that.

There's a lot to be said about June's depression and how it's factoring in to her decisions in Season 3, too. While she was in the hospital with Natalie, a doctor diagnosed her with suicidal thoughts. Her despair festered in isolation. Now that she's back with the Lawrences, June may have found a new focus in getting kids out of Gilead, but she's still putting her own life in danger. It's reckless and alarming, but the path to recovery and mental wellness is not a straight line.

Janine also spoke to June in the hospital, and said that she was being "selfish" recently. It's a word that Aunt Lydia as thrown at her as an insult before, but feels more real coming from Janine. This actually might be the key to June becoming a hero, and the difference between her victories now and her past successes. She's put others before her and helped friends escape, but not in a major way.

Rallying to get all of Gilead's "stolen children" to freedom, not just one of her daughters, could be what ultimately makes her a hero. Even if Commander Lawrence takes the credit, that's to serve his wife, not June, and therefore another selfless act.

That being said, is killing Commander Winslow a selfless act? Technically, his murder was an act of self-defense. As an audience, we don't know what she was thinking in that moment. She's been raped before, as the voiceover reminded us. She knows how to survive by disassociating. Instead, she single-handedly took out a major government official. By doing so she's at least protecting her fellow handmaids from getting their mouths stabled shut, as Winslow wanted. Between his death and Fred's arrest, Gilead is significantly weaker. This kill was for the greater good.

It seems like every episode of The Handmaid's Tale ends with a close-up of Elizabeth Moss' eyes. What is that indicating, and what makes each one different? What is June trying to tell us with those stares? She's been "resolved" to do so many things in three seasons of The Handmaid's Tale: survive, find Hannah, escape, return, save Nichole, and burn everything to the ground while playing the game to her advantage. Her latest resolution, against all odds, is showing results. While it's never a guarantee in Gilead that her latest plan will actually work, and she might still get herself killed, something is going right.

More like this
On 'The Handmaid’s Tale,' Christine Ko Fights Back
By Gretchen Smail
'Grey's Anatomy's New Intern Got Advice From Dr. Bailey Herself
By Grace Wehniainen
Paul Mescal, Man Of Mystery
By Samantha Leach and Heather Hazzan
The 'Reasonable Doubt' Cast Includes A 'Save The Last Dance' Reunion
By Grace Wehniainen
Get Even More From Bustle — Sign Up For The Newsletter