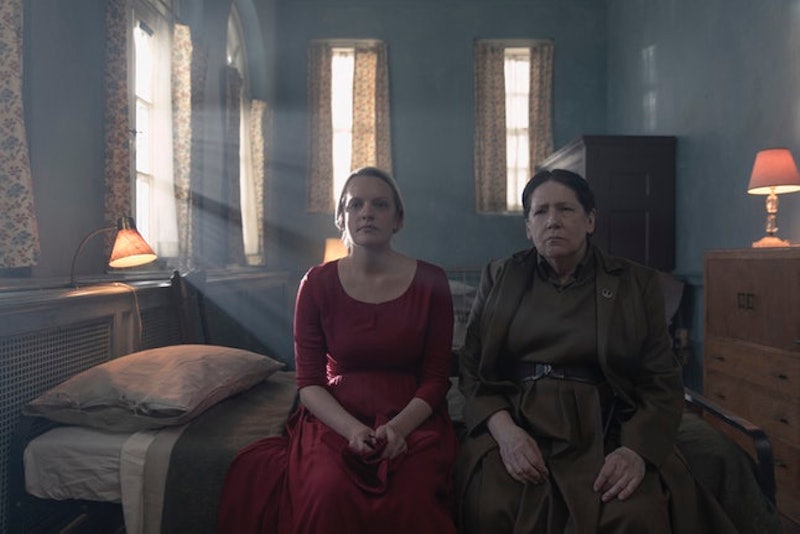 Spoilers for Handmaid's Tale Season 3. Since the very first season of The Handmaid's Tale, June's main goal has been to reunite with and rescue her daughter, Hannah. But now, that goal is getting a little bigger. In Episode 10 of Season 3, June revealed her plan to rescue kids on The Handmaid's Tale and help them escape Gilead, and she's already making process, thanks to other women who want change. But is the plan actually going to work or will it end up with her on "the wall?"

June filled Commander Lawrence's Martha in on her plan in the beginning of the episode, telling her that she wants to get all of the kids of Gilead out. At first, Cora doesn't think it's possible, and neither does Lawrence when June hints that his wife would be better off escaping with her so she could get the healthcare she needs.

But June proceeds with her plan anyway. At the store, she asks Alma if she can find out how many kids are in Gilead, but she's not convinced she should help. And then, Lawrence's wife helps her find the records in the basement that fill her in on where everyone's kids ended up after Gilead was formed.

Heartbreakingly enough, she even found out that Janine's son, Caleb, had died in a car accident since she'd seen him last, and she was even more determined to help get these kids out.

Of course these women want to be reunited with their children, but the threat of being put on the wall is enough to scare them away. But after Commander Waterford forces June and Lawrence to have a ceremony, Lawrence finally agrees to get her a truck out of Gilead as long as she can get his wife out safely. And after talking to both Janine and Alma about their kids at the grocery store, they both agreed to help, too.

But it's not just Janine and Alma who are willing to help June get the kids out. By the time June gets back to Lawrence's house, it seems like her plan actually has a shot at working. Just like June learned that Marthas sending scones means "no," muffins mean "yes," and the entire kitchen counter at Commander Lawrence's house is full of baskets of muffins, signifying just how many Marthas are willing to get involved and help the cause.

At that point, June even quotes Jaws, saying, "we're gonna need a bigger boat," and with this many people on her team, she finally seems optimistic that this could work.

However, it's important to remember that this is The Handmaid's Tale we're talking about here, and every time the show gives fans something to feel positively about, it ends up getting ripped away — like when Serena seemed like she was ready to fight alongside June (but clearly wasn't), or when Nick agreed to testify to help keep Nicole away from the Waterfords and actually made the situation worse.

There's a pretty good chance that this bright spot in an otherwise very dark season won't work out, but fortunately, June never gives up.