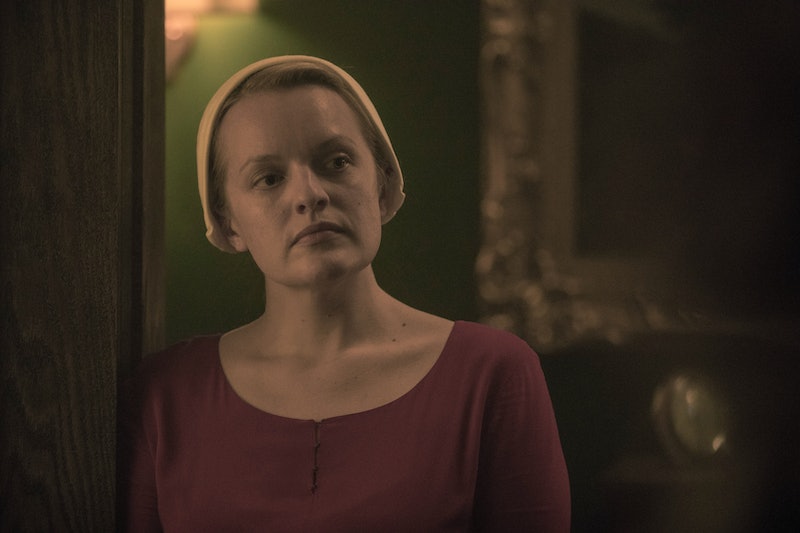 Wednesday's episode of The Handmaid's Tale was almost a bottle episode and although not a lot happened in terms of plot, June's path has been forever changed. All it took was a brutal punishment and some wise words from a surprising source. June and the doctor's conversation on The Handmaid's Tale is not only the first truly useful medical checkup she's had in five years — it touched on a lot of the key political and emotional themes of this season while inspiring June's new purpose to get more children out of Gilead.

The so-called "regular" punishments won't work on June, so Aunt Lydia devises a new way to make her do time for her and Natalie's crime. She forces June to stay in Natalie's hospital room, praying, for months as the fetus (and not the mother) is treated and cared for by doctors. June starts looking for a way out and attacks Mrs. Waterford with a scalpel when she's visiting; but the handmaid is too weak to do any damage and ends up cutting herself instead. Serena, for all her evil, brings the doctor in to help June.

If you were feeling anxious in real life about how some men value the life of an unborn fetus over the lives of pregnant women and women's bodies in general, this episode of The Handmaid's Tale likely manifested that fear in a whole new way. The hospital's main concern is to make sure the baby is born, and they are torturing Natalie before she dies in order to achieve that goal. The doctor even says to June that the unborn child is his patient, not the handmaid.

This is what happens when you take devaluing women's body autonomy to an extreme. Natalie is nothing but an incubator at this point, and its devastating to see in practice. "She's someone's daughter too," June says to the doctor.

At the end of the episode, June defies this ideology by choosing to stay with Natalie after the baby is born. To Aunt Lydia, it just looks like she's being pious. However, it is a brilliant, small, form of protest in the midst of yet another tragedy.

It's clear that this doctor is not all bad, and like many in Gilead is just doing what he can to survive and help as many human lives as he can. "I honor the handmaid's life by saving her child" he says. "How will you honor your daughters?" While it may be frustrating, everyone is coping and rebelling in their own ways. He didn't report June for attacking Mrs. Waterford. The fact that he remembered June's mother from before Gilead is touching, in a way. But the most important part of their conversation, as far as the story goes, had nothing to do with the stitches in her hand or the patient he was supposed to be treating.

Mental health has been a major theme in The Handmaid's Tale Season 3. Almost everyone in Gilead, and all of the refugees who made it, out are dealing with PTSD in some form or fashion. It doesn't appear that the Gilead government officially believes that mental health is health. For example, Mrs. Lawrence's bipolar disorder is not being treated with the proper medication. Likewise, the doctor warned Aunt Lydia against confining June to the hospital room, but his professional opinion was ignored. "The brain atrophies in isolation," he says, "and breeds despair."

He then asks June how long she's been having suicidal thoughts. That hadn't even occurred to her — sometimes depression sneaks up on you, and takes on unexpected forms. June sees her behavior as homicidal, but the doctor correctly identifies it as self-destructive, too. She's lost tabs on Hannah, and so the chances of seeing her or Nichole get slimmer by the day. Her attempts to help or change things in Gilead just end in death. It's not surprising that she's feeling hopeless, and it's important that The Handmaid's Tale is highlighting the reality of her mental illness rather than just insinuating that she "went crazy" in isolation.

Also devastating were the lines of pubescent girls who were marched in and out of the hospital for "menarche exams" and will, just like June, be forced to have babies. A pigtailed child tells June that the hospital has deemed her ready, and when June asks her if that's something she wants, it's probably the only time she'll ever be asked.

Even in Season 3, The Handmaid's Tale finds new ways to be a cautionary tale about what happens when women and mental health are ignored.