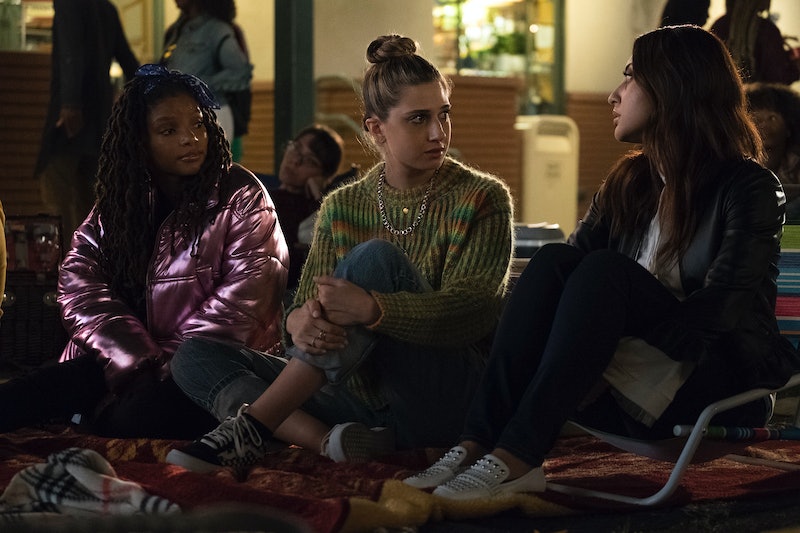 The limits did not exist in the Feb. 27 episode of Freeform's grown-ish, titled, “Wild’n Cuz I’m Young.” When Zoey begins the black-ish spinoff's latest installment observing that college tests, not just your brain, but also your "character, beliefs, and, most of all, your limits," she may have directly been referring to her fellow classmates' levels of alcohol tolerance at a lit late-night pool party, but the message was an easily transferable one. The most notable application, perhaps, was for one of her besties, Nomi, who was noticeably absent from Cal U's "rager of the year."

While the rest of the campus was partaking in alcohol-fueled pre-finals revelry, Nomi was rounding out the week-long "crash course in Queer culture," courtesy of Professor Hewson. (You know, the one the teacher promised her during their, uh, interesting, instant message conversation when she also made her listen to Halsey's "Without Me," in last week's "Body Count" episode.) "Everything you have taken me to this week has been amazing," Nomi, who specifically gushed over an event with writer Roxane Gay, tells her prof while she sits in the passenger seat of her car.

The sexual tension between the women is undeniable. When Nomi's phone blows up with texts about the party, Professor Hewson says she doesn't want to be "selfish" by monopolizing Nomi's time and keeping her from her friends. "Nomi, these are the best four years you're ever gonna get," Professor Hewson tells her. "You're here to experience life, not just talk about it in a classroom. Go do it."

Before they depart, Nomi clearly is considering a goodbye kiss, but chickens out. After a brief hesitation, she says "never mind" — immediately before her teacher pulls her in for a steamy late-night car makeout session. Later, Nomi reveals to Zoey that they "haven't even hooked up yet," so apparently it hasn't gone any further than a kiss — yet. That could all change, of course, given that a giddy Nomi also told her roomie that she's "fallen deeply in like," something Zoey notes is huge for her.

While Professor Hewson clearly had Nomi's consent, their situation does still raise the issue of the power dynamic in relationships. While Cal U is a fictional institution, many colleges, such as Harvard, where grown-ish star Yara Shahidi studies in real life, have formally banned sexual relationships between professors and undergraduate students.

“Sexual relations between students and faculty members with whom they also have an academic or evaluative relationship are fraught with the potential for exploitation,” the American Association of University Professors said in a 2015 statement, the same year Harvard instituted its policy. “In their relationships with students, members of the faculty are expected to be aware of their professional responsibilities and to avoid apparent or actual conflict of interest, favoritism, or bias. When a sexual relationship exists, effective steps should be taken to ensure unbiased evaluation or supervision of the student.”

Of course Nomi and Professor Hewson are in the early stages of their apparent romance — but that's not to say their situation won't get complicated down the line. As part of UK publication The Guardian's Formative Years series, one writer recalled a "messy" end to a relationship with a 40-year-old professor when she was a 17-year-old student. She presents an alternative view of the power dynamic debate, however.

"My friends were polarized — they thought the relationship was either charming or revolting," she wrote. "As for me, I felt emboldened. I had made the choice to make a grown man in a position of power shake with desire."

That writer's conclusion: "Playing around with sex and power can be a thrill, as long as you take care of your heart and your ego." Hear that, Nomi?

While everyone in grown-ish seemed to be embracing the "YOLO" mentality this week, the consequences of said actions are surely imminent, particularly with Zoey's potential exam-cheating issue. Only time will tell what's in store for Nomi and Professor Hewson.

More like this
Pro Footballer Zander Murray Is "Blown Away" By Support After Coming Out
By Sam Ramsden
The 19 Best Tweets & Memes About Bisexual Awareness Week
By Lexi Inks
An Honest Review of MeUndies Boxers, According To A Non-Binary Person
By Megan Lasher
Bimini, Tia Kofi & More React To Cherry Valentine’s Death
By Catharina Cheung
Get Even More From Bustle — Sign Up For The Newsletter