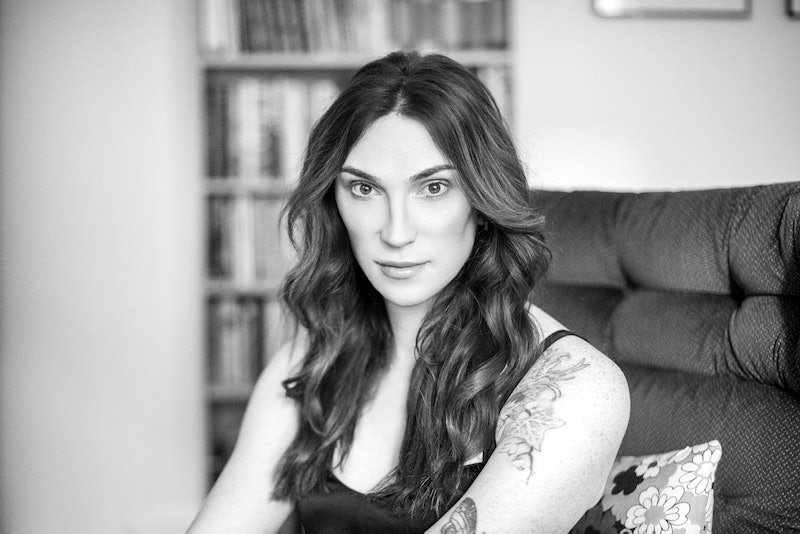 Juno Dawson is one of the hottest writers of young adult fiction and non-fiction in the UK right now. Her writing about addiction, discrimination, and abuse of power has gained her a reputation of being a writer who isn’t afraid to lift the lid on gritty truths. She has built up an incredibly loyal fan following and, in 2014, Dawson won the Queen of Teen award, which is given to young adult fiction writers. Having curated anthologies and written for Doctor Who, Dawson isn’t about to stop now.

Before becoming a writer, Dawson worked as a teacher specialising in PSHE. She then made the move into journalism, interviewing the likes of your early noughties idols Atomic Kitten and Steps before moving on to write novels and work on some episodes of Doctor Who. Dawson’s latest book follows a young model as she is catapulted out of her relatively normal life to model stardom. While this sounds like a dream, Jana soon realises the pitfalls of the fashion industry, and that you shouldn’t trust everybody.

I spoke to Dawson about her influences for Meat Market, why she thought it was time to tell this story, and the plans to adapt the book into a series.

Alice Broster: Meat Market was quite different to anything I’ve seen you write before, what inspired you with this particular novel?

Juno Dawson: This one has been incubating for a really long time. I think I had the idea years ago. I remember I was on a bus I am assuming during school when I was still a teacher. I thought, "Oh my gosh, one day it would be cool to write a very gritty, warts-and-all look at the fashion industry."

At that point, it was interesting because I was a complete outsider. This was before my book deal and before I had written for fashion magazines. It was just really based on things I’d seen in the media and I suppose the perception I had of the industry. At the time, I was writing very different things. Clean had sold to my publisher and they were very excited about it. I did think about doing a sequel and at the time, the Bill Cosby trial was playing out. When you’re writing, you live in society as everybody else and so, of course, the big notion of a young woman being abused by an unquestionable position of authority went into my head and at the same time.

AB: You’d already taken a step into fashion. How did you research for the book?

JD: Well, it’s a bit funny because I was researching it before I knew I was researching it, and I’ve got to be so super careful I don’ t land anyone in it because a lot of the contacts I spoke to are still very much neck deep in the industry. That’s kind of part of the problem and what made it fascinating. There are very few very powerful people working in a multi-billion pound industry and some of the people that I spoke to have since quit because they didn’t like some of the things that they saw going on.

I was living in London, and I was going out a lot and was meeting people who worked in the industry as models. At the time on the whole queer circuit the fashion is linked a lot with gay men who are happy to share their stories.

As much as there was a jokey tone about it, I was like, “That’s horrific. This is awful. This is sort of like human trafficking that we’re talking about.” Bringing these very, very young girls from Belarus or Lithuania or Latvia. I was like, “This isn’t great.”

AB: Meat Market is going to be adapted for screen. How does that feel?

JD: Good. Yes. I am adapting it. It was really wonderful because I think TV is similarly, quite a closed world. Some of my other projects are being adapted by other people. I can understand why there was a reticence to let me have a go at adapting, and so that what was what was really wonderful when I met with Unstoppable, which is Noel Clarke and Jason Maza’s production company. They both have been given breaks and they’ve both been given chances in the industry as well, and so now, I think they’re paying it back.

There was never any question that anybody else was going to write it. I quite naively jumped in. Thank God it worked out, and we’ve been doing lots of redrafting since. I think we’re on it’s thirteenth draft since we sold the option about a year ago. We’re getting ready to send it out to networks, so hopefully, commissioners will like what I’ve done.

AB: You’ve mentioned Clean already, and you cover some pretty heavy topics in your others works, including in Meat Market. Why do you think it’s important to discuss things like drugs, abuse, and body image in YA novels?

JD: It’s funny, I just always had an impression when I was a teacher that these things do come up, and that was with 11 year olds. I think around the age of 11 the blinkers come off and young people become aware that there are things that they’re being shielded or sheltered from. Of course, that makes them feel tabooed and that creates even more curiosity.

I used to say, the most successful week in any year six class is sex education week. You could hear a pin drop. I think if you take a subject that’s taboo, immediately it becomes quite important. We can either go through these things with fiction or we can leave young people at the mercy of the internet. I think those are your options.

What we also learn from the success of Clean is that that there’s a lot of women in their early to late twenties who are just super keen for very accessible, really gritty fiction about young women.

AB: Do you think it’s important for your readers to see themselves and the issues that are presented in novels? Do you think it is helpful to conversations being had?

JD: Yes. I think a slight wall of silence was smashed. If men as big and powerful as Harvey Weinstein or Bill Cosby could be so publicly accused, I think that meant women all around the world recognized that no man was invincible. That we did have a voice. If you can bring down those kind of men, that women have more power than maybe we thought we did.

It’s interesting. I think the very specific element of sexual violence that I wanted to explore with Meat Market was the idea that if you say something you’ll make it worse. I think that dilemma has affected me. It’s affected a lot of my friends. I imagine it’s affecting a whole lot of other young women out there as well.

AB: As you mentioned, you’ve built up a massive body of work now. Throughout all of your books you feature strong female and LGBTQIA+ characters. Is that something you have to think about or are they the characters that you like to write?

JD: It was just a no brainer. I was reading a lot of YA and I think things have gotten much better over the last decade, but at that point, I wasn’t seeing very many LGBT characters in books at all. I would say in all books, not just YA. You would have really go looking, and you used to have to go to the gay fiction section in Waterstones. I think things have improved.

When I wrote Hollow Pike, I thought, “Right, if you make four of the main characters in some way queer, hopefully, one of them will survive until the final draft.” I’ve been very lucky in that all of my publishers have just really backed it and have never questioned the inclusion of those characters.

I’m very proud of the fact that in all of my books the queer characters are not there to be queer. Kendall in Clean is a good example. She was the trans character in Clean. She’s in rehab. She’s not in rehab because she’s trans, she’s in rehab because she has an eating disorder. They have to tell their own story to tell aside from their sexuality or gender.

AB: Earlier this year, you curated the Proud anthology. I loved it. It was awesome. Is it important to you to give upcoming LGBTQIA+ writers a platform?

JD: Yes. Absolutely. I was really lucky to break into YA. I suppose this was during the fruitful post-Twilight period where publishers were investing an enormous amount of money in what they consider to be an expanding field. I think it’s definitely slowed down. There’s always going to be a thirst for really amazing novels with teen characters, but it’s way harder to get published as a YA author now than it was ten years ago.

AB: It is nearly Pride Month. Bustle has been speaking to people about why they think Pride is still relevant today. Do you think it’s still relevant and important, and why?

JD: Yes, I think so. The best Prides are the ones which are a mix of a party and protest. I know I’ve said that a lot of times, I’m weary of the commercialization of the big Prides. Last year, Brighton Pride was feral. It was a Britney concert gone mad. But then everyone knew what it was in aid of.

They’re having the exact same conversation about Manchester Pride with Ariana Grande this year. Again, that is one of the most famous women in the world very vocally speaking about the LGBTQ community. How is that a bad thing? That’s a wonderful thing, but I’m a huge fan of smaller local Prides. I’ve been to Swindon Pride. Margate Pride was a first last year, as well. I think they’re really wonderful because without all the big corporate sponsors, you can still have quite an unfiltered voice, and you can still say, “These are the issues that are affecting the front line. Waitlists for gender clinics, homophobic violence, struggles with employment. The fact that non-binary people are in no way legal right now.” We can have those conversations, as well as going to see a big pop concert. Actually, I guess it’s the best of both worlds, really.

Meat Market is out now and available to buy here.