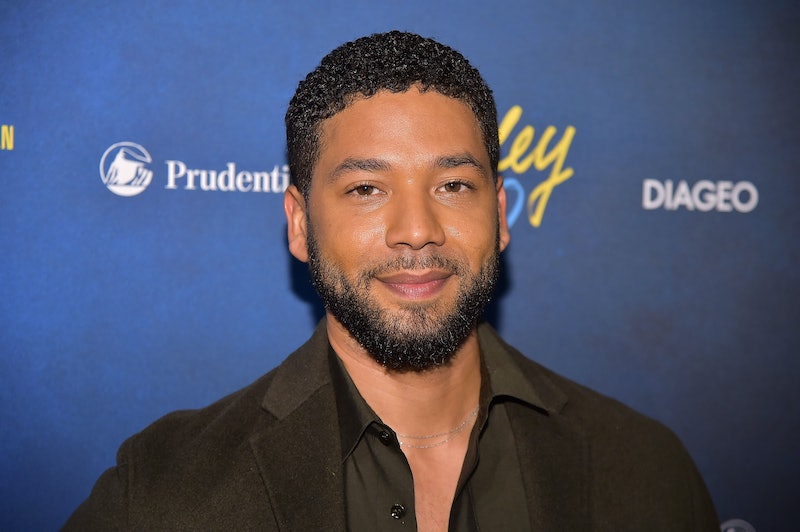 On Saturday, Feb. 3, Empire actor Jussie Smollett returned to the stage with a concert at West Hollywood's Troubadour club, as reported by Variety. His performance came less than a week after he was assaulted by two assailants in Chicago on Tuesday, Jan. 29. During his show, the actor and singer paused to clear up some points about the attack, as well as to reiterate that while he's not completely healed, he's not letting his attackers keep him from doing his work.

"I have so many words on my heart," the actor said to the crowd, per Variety. "The most important thing I have to say is thank you so much and that I'm okay. I'm not fully healed yet, but I'm going to. And I'm gonna stand strong with y'all… l will always stand for love. I will never stand for anything other than that. Regardless of what anyone else says, I will only stand for love. And I hope that you all will stand with me."

Smollett was attacked by two assailants while he was walking in downtown Chicago in the early hours of Tuesday morning. According to the actor, two men in masks yelled homophobic and racial slurs at him before beating him, drenching him in an "unknown chemical substance" according to police, and putting a rope around his neck. They then fled the scene. According to CNN, the Chicago police department is investigating the incident as a possible hate crime. Smollett is openly gay and black, and he also plays an openly gay character on Empire.

Smollett paused during his concert to clarify some the details surrounding his attack. In a video from Entertainment Tonight, he told the audience that his ribs weren't cracked or broken. He also said that he went to the hospital immediately after the attack, but he was never hospitalized. Doctors in both Chicago and Los Angeles cleared him to perform on Saturday night. "I had to be here tonight, y'all," he said. "I can't let the motherf*ckers win." The actor also wanted the audience to know that he "fought the f*ck back."

The actor was joined at his concert by his family, Empire creator Lee Daniels, and Rep. Maxine Waters. Smollett's brother Jojo introduced him to the crowd, saying, "There’s been an outpouring of love and support … There's also been (inflammatory) stories spread that have hurt him deeply. I sincerely wanted him to stay out of the public until he healed. And after much debate, some arguing and many tears, my family and I have realized that tonight is an important part of his healing. You see, he's been a fighter since he was a baby. He fought his attackers that night and he continues to fight. Jussie is a true artist every time he breathes. But above all else, he is the epitome of love."

Saturday's concert was not the first time Smollett and his family have commented publicly about the attack. On Friday, the actor issued a statement to Essence, "Let me start by saying that I’m OK. My body is strong but my soul is stronger. More importantly I want to say thank you. The outpouring of love and support from my village has meant more than I will ever be able to truly put into words."

He continued, "I am working with authorities and have been 100% factual and consistent on every level. Despite my frustrations and deep concern with certain inaccuracies and misrepresentations that have been spread, I still believe that justice will be served."

In the wake of the attack, there's been an outpouring of support for Smollett from Hollywood and beyond. Not only have his fellow actors been sharing messages of love for the Empire star, politicians and social activists have spoken out against the possible hate crime. No one's words are quite as powerful as Smollett's though, and by returning to the stage on Saturday, he further proved just how determined he is not to let hate win.