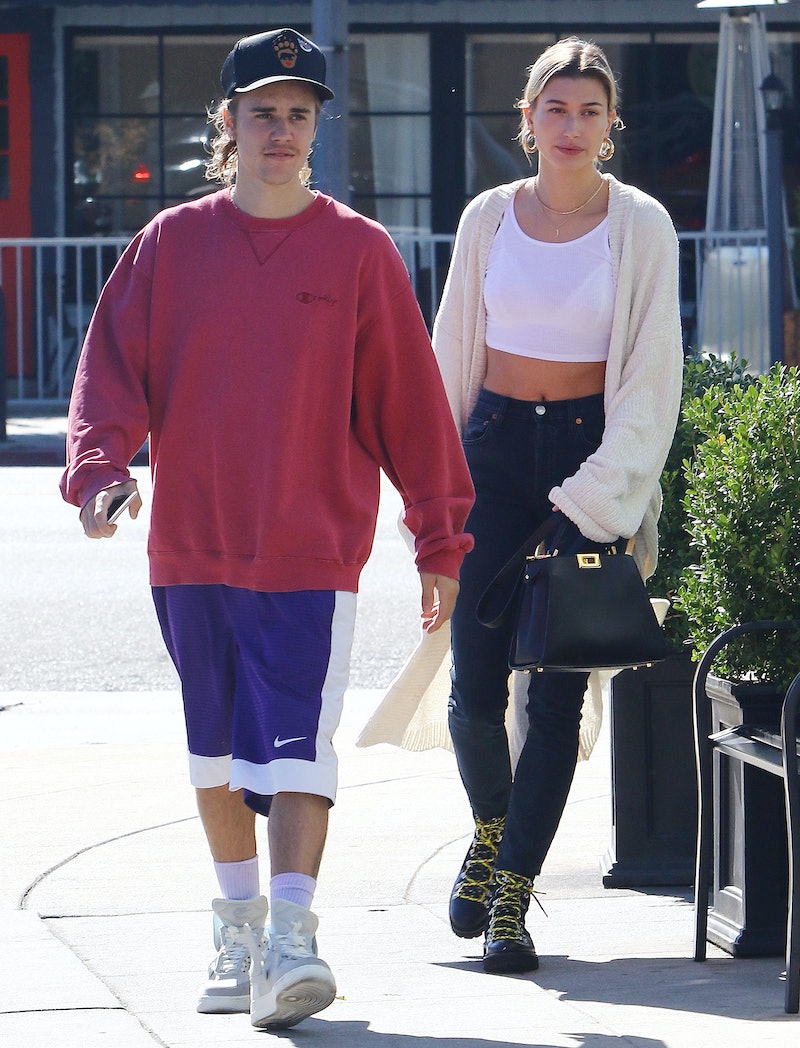 Is it too late now to say sorry? After several of his social media posts sent a wave of confusion throughout his fandom, Justin Bieber apologized for his April Fools' pregnancy prank via a lengthy explanation on Instagram. While the whole thing was seemingly all in jest, some found his prank to be insensitive, especially toward women who aren't able to conceive. Bieber made it clear that he never meant to offend, though, and chalked it up to just generally being a goof.

So, in case you missed it, here's what originally went down. On April 1, Bieber shared a photo of a sonogram — which we now know was fake — that caused some fans to believe that his wife, Hailey Baldwin, was pregnant. He took the joke even further by posting a second pic that seemingly showed Baldwin preparing for an ultrasound at the doctor's office, and that one really threw fans into a tailspin. "If U thought it was April fools," he captioned the shot.

Bieber then added a third photo that quickly cleared up any confusion. He chose another image of a sonogram, but this one had a pic of a cute little puppy imposed inside it. "Wait omg is that a,,, APRIL FOOLS," he joked.

Not everyone was amused by Bieber's pregnancy prank, which has since caused the singer to apologize. He started off by saying that, "There's always gonna be people offended, there’s also people who don’t take jokes very well, I am a prankster and it was APRIL FOOLS."

He then went on to add that "people ... telling their parents they are pregnant to get a big reaction" on April Fools' Day isn't exactly a new or unusual thing from his perspective. Regardless, he said he "didn’t at all mean to be insensitive to people who can’t have children," and continued to explain the reasoning behind his joke.

"I truly don’t want anyone to be hurt by a prank.. it’s like when I shoved cake in my little sisters face for her birthday expecting her to laugh but she cried. You sometimes just don’t know what will hurt someone’s feelings not to compare pregnancy with cake in the face but it’s just to paint the picture of not knowing what will offend. Some might have laughed but some were offended .. I think With pranks u sometimes have to roll that dice. #prankster #dennisthemenace #sorry #truly."

Now, some people thought the prank was funny. Take Bieber's mom, Pattie Mallette, for example. As reported by Us Weekly, Mallette respond to the puppy pic reveal in a surprisingly chill way. "Ha ha. Happy #AprilFools," she wrote in the comments, followed by an eye-rolling emoji. "I’m always on guard and ready for you today."

She then confessed her true feelings about being a grandma one day, writing, "I am SO looking forward to the day y’all bringing me babies that are ‘GRAND’! You’re going to make BEAUTIFUL children and be GREAT parents when the time comes!! Maybe just don’t call me Grandma. Or Nana. Or Nanny. Or… OKAY I DON’T KNOW IF I’M READY!"

Anyway, whether or not you were personally offended by Bieber's prank, it's easy to see why it bothered some people. At least he's willing to own up to his mistake, though, and hopefully he'll be more conscious of these kinds of things moving forward. You live, you learn, right?

More like this
Hailey Bieber Just Responded To *That* Viral Met Gala Moment
By Radhika Menon and Sam Ramsden
What Is Miles Teller’s Net Worth? The 'SNL' Host's Bank Account Is No Joke
By Meg Walters
Who Is Nick Cannon Dating & How Many Kids Does He Have?
By Jordyn Tilchen and Radhika Menon
Everything To Know About Taylor Swift’s 10th Studio Album, 'Midnights'
By Grace Wehniainen and Jake Viswanath
Get Even More From Bustle — Sign Up For The Newsletter