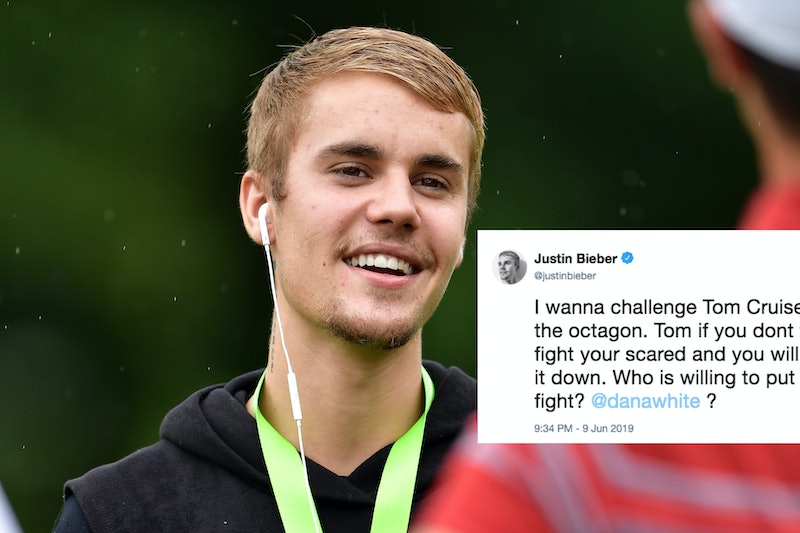 Twitter has become the go-to place for celebrities to air their grievances, and any time this happens, fans also jump in with their own opinions. This was definitely the case for the latest possible celebrity throwdown, which took everyone by surprise — Justin Bieber apparently wants to fight Tom Cruise, according to a tweet he wrote on Sunday, June 9. The moment left plenty of Twitter users asking, "Wait, what?" (Bustle reached out to Bieber's rep for comment on the situation, but did not receive an immediate response.)

There's not much context that precedes Bieber's call to arms. The "I Don't Care" singer has never significantly mentioned Cruise before this, and Cruise hasn't been in the news too much lately, so there's no discernible reason Bieber would want to fight him. Despite this, he wrote,

"I wanna challenge Tom Cruise to fight in the octagon. Tom if you dont take this fight your scared and you will never live it down. Who is willing to put on the fight? @danawhite ?"

Fans probably should not be too inclined to take Bieber's threat seriously. Especially since this isn't even the first time he's asked someone to fight him. Back in April, Bieber challenged Shawn Mendes to a hockey game on Instagram after Mendes was called the "Prince of Pop," a title Bieber apparently felt was his. He later clarified his statement in another comment, confirming there was no bad blood between the two Canadian singers and writing, "there is no competition and it was a playful joke people relax.."

If Bieber's message for Cruise is anything like his words to Mendes, he's likely just having a bit of fun. It's no secret that the internet can blow small things out of proportion, so I highly doubt Bieber is actually raring to go at it with Cruise (or actually believes he can beat Cruise — I mean, come on, you can't do your own stunts in the Mission: Impossible films without a fair bit of strength).

But Bieber's tweet also seems pretty straightforward; there's not much room for interpretation in "I wanna challenge Tom Cruise to fight in the octagon." He even went so far as to tag Dana White, the current UFC president, suggesting that he wants the fight televised.

Now, there's no way Bieber could have sent this message out into the world without sparking up some reaction from Twitter. While Cruise himself has not responded to the call for action yet, plenty of others have: Most people, understandably, were simply confused.

Others are choosing to just accept this new reality, and have begun picking sides.

UFC Canada took notice of the tweet, so there may be actual interest in putting this thing on — predictably so, since both Bieber's and Cruise's names were trending on Twitter after the tweet was sent out.

Multiple people — including promoter Oscar De La Hoya (who has since-deleted his tweet) and UFC champion Conor McGregor — have even offered to host the fight.

McGregor took it a step further by challenging Mark Wahlberg to put his fists up, too. Who's next? Matt Damon? Leonardo DiCaprio?

Unfortunately for Bieber, though, it looks like most would place their bets on an easy victory for Cruise.

It seems like most people have the same response to Bieber: Good luck. You'll probably need it.