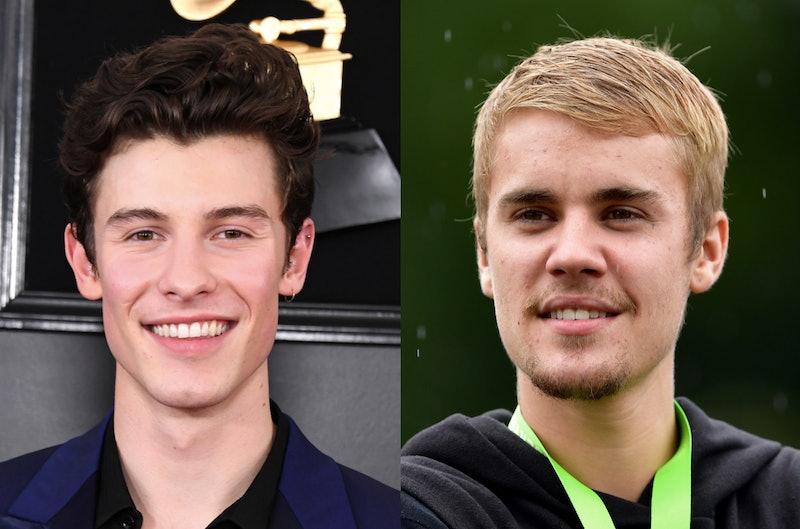 These two mega-popular singers are ready to settle the score in a very Canadian way. On Sunday, April 7, Justin Bieber joked about Shawn Mendes stealing his "Prince of Pop" title, and he proposed the two duke it out on the hockey rink. The Observer Magazine put Mendes on the cover of the April issue, which was titled "Prince of pop. The "Treat You Better" singer shared the cover on Instagram on Saturday, where it caught the attention of another pop icon. Bieber was sure to chime in Mendes' comments, even poking fun at his stolen pop crown.

"Hmm '' Gonna have to break a few more records to dethrone my title there bud ([C]anadian voice)..but if you want we can play hockey for it but i heard your a real bender on the ice we could just drop the buckets and tilt for it."

Fans wondered if these two were feuding for real, and a few replied to Bieber urging him to be more respectful. One person wrote, "You are already ruling man! You don't need to dethrone anyone else!!" Another added, "@justinbieber release some music then and we’ll see." However, Mendes clearly found the joke funny, and the comment was all in good fun. The singer replied, "@justinbieber LOL any time any day you just let me know!!!!!!!"

Still, a few people weren't convinced of the friendly banter, and Bieber hopped back in the comments to confirm there was no bad blood. He wrote, "there is no competition and it was a playful joke people relax.. there's n sides we're all just here to make dope music. I'm just competitive as is he so it was just a little playful jargon."

These two are clearly pals, but Bieber and Mendes' friendship has a complicated past. In 2018, Mendes and Hailey Baldwin sparked relationship rumors after attending the Met Gala, according to Teen Vogue. One month later, Baldwin was engaged to Bieber, with whom she'd had an on-again/off-again relationship for years, as per Elle. Baldwin unfollowed Mendes on Instagram, according to E! News, and Bieber appeared to take a dig at the singer in "No Brainer" with the lyrics, "Him or me, be for real, baby, it's a no-brainer."

However, Bieber and Mendes have made it clear that they respect each other in interviews. According to Rolling Stone, Mendes confirmed a romantic relationship with Baldwin, but insisted there were no hard feelings between the stars. "I get it, you know,” Mendes told the publication in November of 2018. “I texted Hailey, ‘Congratulations,’ and I really am happy for them.”

The stars' latest exchange on Instagram further proves that these two are past the drama. It's been a major professional year for both, so it will be difficult for fans to decide who gets the title of pop royalty.

On Friday, NBC announced that Mendes would play Saturday Night Live on May 5, his second time on the show. Meanwhile, Bieber's latest single "No Brainer" with DJ Khaled and Quavo was No. 1 on the Billboard Rhythmic Charts. A little competition might be good for their fandoms, if it pushes these two to keep putting out hit music.

More like this
Justin & Hailey Bieber’s Relationship Is “Unbreakable” After Their Two Health Scares
By Bustle Editors
Everything To Know About Taylor Swift’s 10th Studio Album, 'Midnights'
By Grace Wehniainen and Jake Viswanath
Twitter Is Freaking Out Over Rihanna’s 2023 Super Bowl Halftime Show Announcement
By Stephanie Topacio Long
Ed Sheeran’s Surprise Gig Included An Iconic Britney Spears Tribute
By Bustle Editors and Darshita Goyal
Get Even More From Bustle — Sign Up For The Newsletter