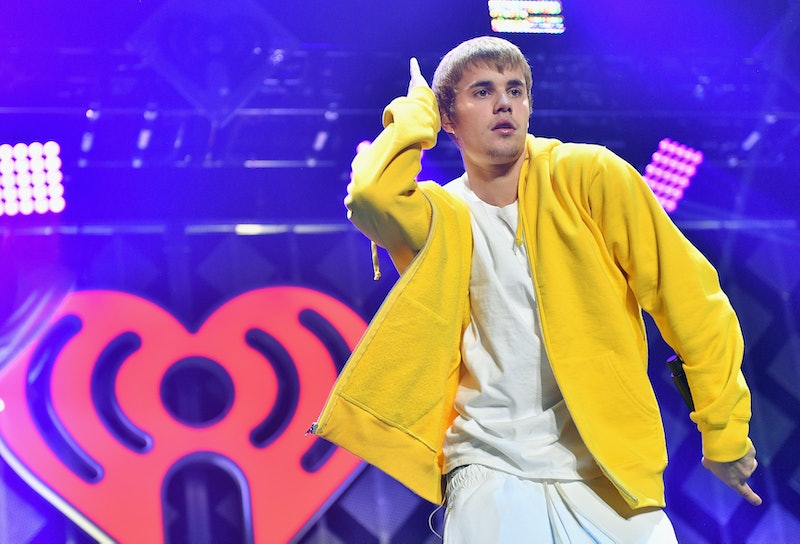 Everyone remembers the Disney Channel original The Suite Life of Zack & Cody & Biebs. Okay, that wasn't the show's title, but Justin Bieber looked just like the Sprouse twins when he was little, and he has the photos to prove it. Sure, Bieber never actually appeared alongside the twins on the sitcom, but that doesn't mean there isn't some serious family resemblance. On Saturday, Bieber posted his own childhood photos alongside pictures of Dylan and Cole Sprouse on Instagram, and asked fans if there was a true similarity. His followers were excited about the twinning moment, and more than a few people thought these stars could be siblings.

In addition to the side-by-side pictures, Bieber pointed out the resemblance, and tagged the Sprouse twins. He wrote:

"Me and the Sprouse twins looked so similar as a baby. I coulda subbed in for them for big daddy. Comment yes or no down below! @dylansprouse @colesprouse."

The "Love Yourself" singer also told fans that he could have been a double in Big Daddy. The movie, which premiered in 1999, starred both Dylan and Cole as Julian, the son adopted by Sonny, who was played by Adam Sandler. The singer also asked followers to comment with their own thoughts on whether or not he looked like the former Disney stars. It's not yet clear if the Sprouse twins will address their potential relation to Biebs, but the post got a laugh from family, friends, and fans.

Many of Bieber's followers had an opinion on the potential Sprouse twin resemblance, including his own mother Pattie Mallette. Mallette shared her appreciation for the adorable photos in the comments, writing, "Omgosh baby CUTENESS!!!" Scooter Braun, Bieber's manager, commented, "Genius." Niall Horan also enjoyed the post, commenting with three crying laughing emojis. Survivor contestant Rodney Lavoie Jr. used the opportunity to share his love for Big Daddy, writing, "Movie gets you everytime" with a crying emoji.

It's clear that family was on the I Don't Care singer's mind this weekend. On Saturday, Bieber posted a photo from ancestry.com on Instagram of a relationship tree that appeared to show he was related to both Avril Lavigne and Ryan Gosling. He captioned the photo with a joke, "I also just found out that I’m related to both Ryan gosling and Avril Lavigne this is the best day of my life.. it seems super legit it’s on ancestry.com."

Friends and fans of the star were amused by this post as well, and sounded off in the comments to share in the laugh. Braun commented, "I always saw a strong resemblance" with a smiley emoji, while Lavoie Jr. wrote, "He was a skater boy!" and "It's LIT!". Of course, it doesn't seem like the singer is too convinced of the relation, but he does seem more certain that he's a long lost member of the Sprouse family.

Only time will tell if Dylan and Cole will chime in on the Bieber resemblance. In the meantime, it seems that the singer has done some digging into his own familial background, just to make sure there's no relation. No matter what information Bieber finds on the internet, fans would certainly support him having a role in a Suite Life of Zack & Cody reboot.

More like this
17 Years Ago, 'Hannah Montana' Reportedly Almost Cast This 'Gossip Girl' Star
By Grace Wehniainen
Netflix Reveals First Look At Wednesday In The 'Addams Family' Spinoff Series
By Bustle Editors
Shakira Joked About An Early 2000s Video Of Her First Camera Phone Encounter
By Stephanie Topacio Long
Revisit 1992’s 'A League Of Their Own Cast' Photos After The New TV Series
By Grace Wehniainen
Get Even More From Bustle — Sign Up For The Newsletter